Prevalence of Obstructive Sleep Apnea in Glaucoma Patients: A Systematic Review and Meta-analysis

Aim and objective: Obstructive sleep apnea (OSA) is a known systemic risk factor associated with glaucoma. The purpose of the study was to determine the overall prevalence of sleep apnea among patients with glaucoma.

Design: A systematic review and meta-analysis.

Materials and methods: A systematic literature search was performed through MEDLINE, EMBASE, and CINAHL and gray literature using Clinical Trials.gov, and ProQuest Dissertations and Theses and conferences held through the Association for Research in Vision and Ophthalmology, American Academy of Ophthalmology, and Canadian Society of Ophthalmology was done until June 10, 2020. Eligible articles were identified by reviewing the retrieved results. Data extracted included the total number of patients with glaucoma and the proportion of glaucoma patients with a co-occurring diagnosis of OSA. STATA 15.0 was used to perform the meta-analysis.

Results: 544 articles were gathered from the databases and 40 records were collected via the gray literature search. Ten studies with 956 subjects were included for analysis. The results of the meta-analysis demonstrated a significant rate of OSA among glaucoma patients (ES = 0.17; CI: [0.08, 0.25]).

Clinical significance: The findings in the ongoing investigation on the link between glaucoma and OSA continue to be unclear. The results from this study contribute to evidence of an association between the two diseases.

Glaucoma is a group of eye diseases that involves the progressive degeneration of the optic nerve and is often associated with high intraocular pressure.1 However, left untreated, glaucoma can lead to irreversible vision loss and potential blindness. Many types of glaucoma typically do not produce noticeable symptoms until significant vision loss is experienced. Glaucoma is the leading cause of irreversible blindness in the world currently estimated that it affects 400,000 people in Canada and 67 million people worldwide.2

Obstructive sleep apnea (OSA) is a sleep-related breathing disorder and is commonly measured using the apnea-hypopnea index (AHI). Individuals intermittently stop breathing for a minimum of 10 seconds during their sleep. Typically, this is due to muscle relaxation during sleep which causes the soft tissue in the back of the throat to collapse and block the upper airway. Sleep apnea can cause people to wake up gasping for breath, snore loudly, and feel tired even after a full night’s sleep.3 Approximately 29 million Americans are affected by sleep apnea with only around 6 million formally diagnosed.4 Risk factors for sleep apnea include obesity as well as excess weight.5

Many studies have investigated the association between the two disorders6 and have even claimed sleep apnea to be a potential risk factor for developing glaucoma or vice versa.7–10 Evidence for a higher prevalence of OSA in glaucoma patients has also been previously found.11 The purpose of this study is to identify the current prevalence of sleep apnea among patients concurrently diagnosed with glaucoma. A systematic literature search followed by meta-analysis was executed by investigating the total number of patients with glaucoma and the proportion of glaucoma patients with a co-occurring diagnosis of OSA.

The Preferred Reporting Items for Systematic Reviews and Meta-Analyses (PRISMA) statements were used to conduct the systematic review.12 Database searches were executed on MEDLINE, EMBASE, CINAHL, Clinical Trials.gov, and ProQuest Dissertations and Theses to find studies investigating both sleep apnea and glaucoma. In each database, a search strategy was designed (Appendix A) to retrieve pertinent articles up to June 10, 2020. OVID® AutoAlerts were set up for both MEDLINE and EMBASE to send monthly updates on any new pieces of literature that may have been of relevance. The searches contained no limits.

Studies pertaining to sleep apnea diagnoses in patients with any form of glaucoma were included, as the prevalence of sleep apnea among patients concurrently diagnosed with glaucoma was of primary concern. A sample size of at least 20 eyes was a requirement for an article to be included for analysis. Clinical trials, comparative studies, and case series were included. Single case reports and secondary studies, such as editorials, were excluded. Other systematic reviews and meta-analyzes were also excluded from the analysis. Only studies on humans with a full-text article in English were included.

The results of each database search were imported into Covidence (Covidence systematic review software, Veritas Health Innovation, Melbourne, Australia). Upon import, the screening was performed by two independent reviewers (BY and RC) after removing duplicates. Level 1 title and level 2 abstract screening were then carried out. Cohen’s Kappa coefficient was calculated after each level of screening before resolving any conflicts. Conflicts were resolved through consensus between the two independent reviewers. If consensus could not be achieved, then a third reviewer was required to arbitrate. During level 3 full-text screening, the full texts of any studies that had made it past level 2 screening were uploaded. Following level 3 screening, Cohen’s Kappa was calculated before conflict resolution. The remaining articles were then checked for their quality.

The quality check was completed to confirm the comprehensiveness of the methodology used in our study. A modified Downs and Black checklist was used for the quality assessment of the included studies.13 Various items were examined in the studies including reporting, external validity, internal validity (bias), internal validity (confounding), and power. All studies were then given a total score out of 28. As a result of the limited articles and studies available, all evidence was included for analysis.

One investigator (BY) performed the data extraction. Baseline information extracted from the 10 studies included the first author’s last name, year of publication, country of origin, study design, study groups, total sample size, the mean age of participants, and percentage of female participants. Other data extracted included the total number of patients with glaucoma and the proportion of glaucoma patients with co-occurring diagnoses of sleep apnea.

A meta-analysis was performed to combine the results from the included studies that investigated the current prevalence of sleep apnea among patients concurrently diagnosed with glaucoma. By statistically combining the findings such as the proportion of glaucoma patients with sleep apnea from the included studies, the analytic power significantly increased, resulting in a single effect estimate of proportion known as the summary effect.

The program STATA v. 15.0 (STATA Corporation, College Station, TX, USA) was utilized to perform the meta-analysis. Prevalence of sleep apnea among glaucoma patients was computed as the effect size. To explore the proportion of glaucoma patients with co-occurring diagnosis of sleep apnea, the included articles were pooled together through the use of the fixed-effect or the random-effects model based on the presence of heterogeneity. To test the null hypothesis, a Z-value was computed. To evaluate heterogeneity, I2 statistics and χ2 test was computed. A low p value, large χ2 statistics, and I2 statistic, indicated significant presence of heterogeneity in-between studies and therefore, a random-effects model using the DerSimonian and Laird technique was computed. Forest plot was also created to display effect sizes and a funnel plot was generated to assess the risk of publication bias.

Flowchart 1 summarizes the results of the literature search. Upon searching, 584 potentially relevant studies were produced. All studies were imported into Covidence where 158 duplicates were removed from screening. The remaining 426 studies underwent level 1 screening for their titles. Three hundred and twenty-four were excluded because they did not look at sleep apnea in patients with glaucoma. 102 studies then underwent level 2 screening for their abstracts. 84 studies did not investigate the prevalence of sleep apnea in glaucoma patients and were excluded. The remaining 18 studies underwent level 3 screening for their full texts. Eight studies were excluded because they did not report a rate or proportion of patients diagnosed with sleep apnea among those presenting with glaucoma. The final 10 studies were included in the data analysis. These studies had their quality checked through the use of a modified Downs and Black checklist. One study was poor quality (≤14), one study was fair quality (15–19), eight studies were good quality (20–25), and no studies were excellent quality (26–28). 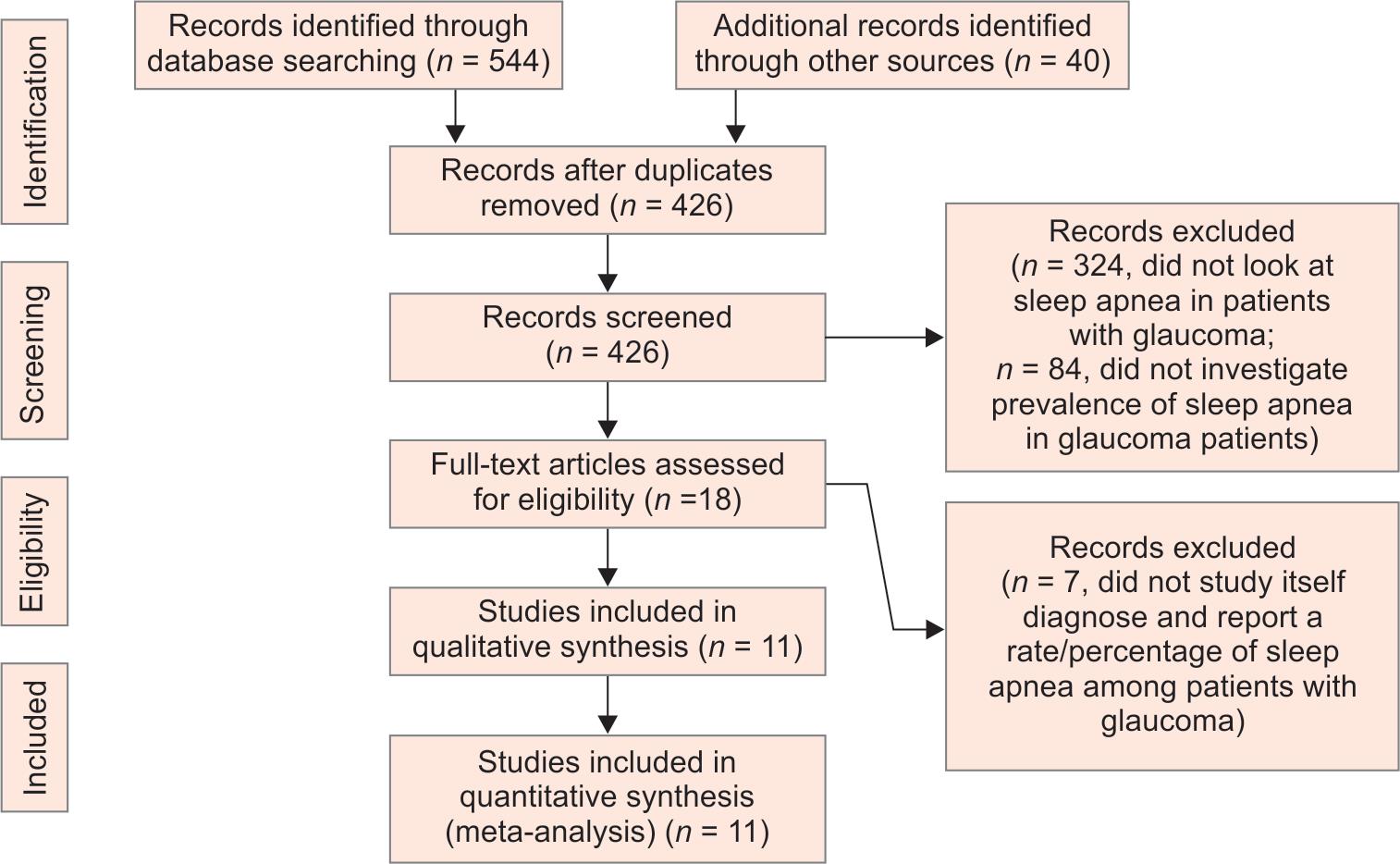 Studies conducted by Balbay et al. and Ledina et al. were both case series investigating the prevalence of OSA in glaucomatous patients.14,15 All other studies included were comparative and included multiple groups.11,16–22 For these studies, data on OSA from the glaucoma group were extracted for quantitative analysis. For studies with more than one glaucoma group, both groups were combined before data extraction. Both studies by Wozniak et al. were grouped as one so that only data from Wozniak et al. was extracted being that it provided an updated data set to the study by Wozniak et al.16,21

Figure 1 shows the funnel plot for studies investigating the prevalence of sleep apnea among glaucoma patients. The included studies were scattered from the central area to the bottom right and top left and right corner of the plot. As such, publication bias could not be concluded. Partial reasons for this were difficulty in interpretation of the funnel plot for a small group of studies, high heterogeneity, and small effect sizes. Furthermore, publication bias is only one of the many reasons that may account for funnel plot asymmetry.

Through meta-analysis, the present study investigated the prevalence of OSA among patients with any form of glaucoma. Numerous bibliographic databases search as well as gray literature search were conducted. The principal outcome measures were the rate and proportion of patients with glaucoma identified with a diagnosis of OSA. Ten studies were included for analysis. The characteristics of the included studies such as the proportion of glaucoma patients with co-occurring diagnoses of OSA, the study population, the study design, study location, and sample size, were described. The results from this study revealed a 17% prevalence of OSA among patients with glaucoma. 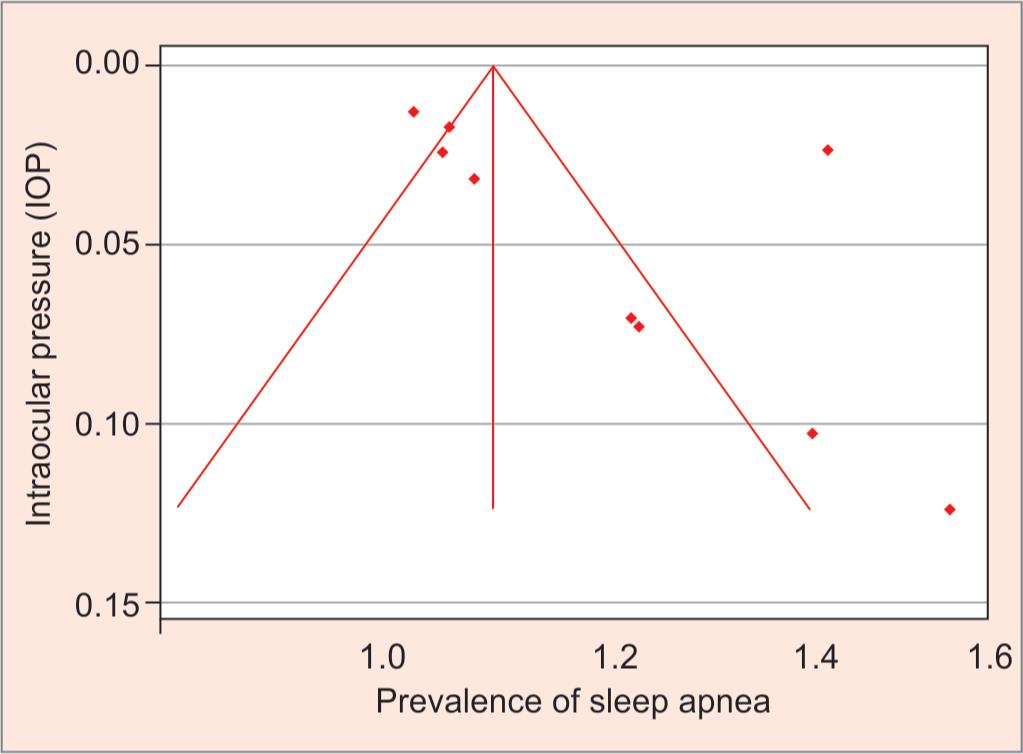 Limitations of the present study include the deficits in the studies that were included. Although the majority of studies were of good quality, studies of less quality were also included. However, all studies were included regardless of their quality because of the limited studies that were available for analysis. Between the studies, a substantial amount of heterogeneity was revealed. However, this could reflect different study populations or demographics, participant criteria, study location, physician’s experience, available facilities to conduct the research study, as well as the year the study was conducted.

Other limitations include the tools used for the diagnosis of OSA in the studies. Although many studies used a combination of sleep questionnaires and PSG,14,17,18,20 other studies simply used only PSG11,16,21 or only used oximetry.11,22 It should also be noted that both the study by Marcus et al. and Shalaby et al. have important methodological limitations related to preselecting patients based on symptoms, including historical control groups.18,20 Ultimately, the results of this meta-analysis suggest that more high-quality studies need to be reported to make strong conclusions.

This systematic review and meta-analysis has shown that the overall prevalence of OSA among patients with glaucoma is 35%. Future research could involve case-control studies with larger amounts of participants to further confirm the prevalence rate of OSA in glaucoma patients. Furthermore, systematic reviews on the prevalence of glaucoma among patients with OSA have not been thoroughly investigated. It will be worthwhile to continue to further investigate and summarize the relationship from the other end to further establish a possible link between the two diseases.

The findings in the ongoing investigation on the link between glaucoma and OSA continue to be unclear. The results from this study contribute to evidence of an association between the two diseases pointing to a potential concurrent glaucoma-sleep apnea screening. 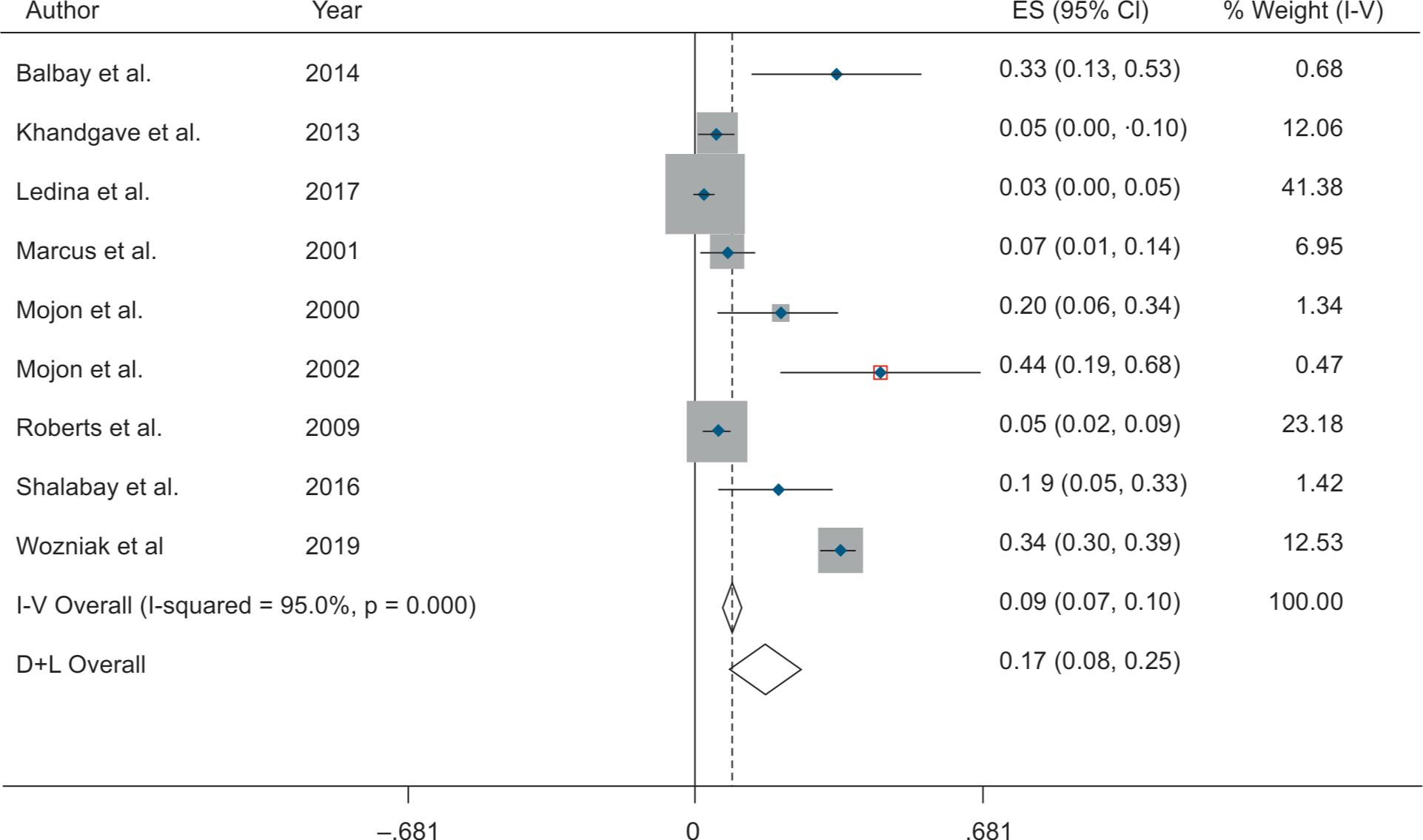 Fig. 2: Forrest plot showing a significant prevalence of obstructive sleep apnea at 17% among patients with glaucoma

APPENDIX A: SEARCH STRATEGIES FOR ALL DATABASES

13. Downs SH, Black N. The feasibility of creating a checklist for the assessment of the methodological quality both of randomised and non-randomised studies of health care interventions. J Epidemiol Community Health 1998;52(6):377–384. DOI: 10.1136/jech.52.6.377.