Source of support: Funded in part by an unrestricted grant to the Department of Ophthalmology and Visual Sciences at Vanderbilt University Medical Center by Research to Support Blindness (New York, NY). SLG has research support from Olleyes, Inc. but it is unrelated to the topics discussed.

Traquair is well recognized for describing the visual field as “an island of vision in a sea of darkness”.1 In clinical practice, we assess this “island of vision” during our diagnosis and management of optic neuropathies. The visual pathways are elegantly organized, beginning with the retinal nerve fiber layer, and ending with the visual cortex. This elegant topography allows us to localize lesions and monitor afferent defects. The primary goals of perimetry are to detect afferent dysfunction and to monitor progression.

Visual field testing (perimetry) uses either kinetic or static targets. Kinetic perimetry, conducted using a tangent screen or with a Goldmann perimeter, utilizes a moving stimulus that travels from an unseen region to cross the threshold into being seen. Static perimetry flashes a stationary stimulus of varying intensity to determine a threshold value for light detection at various locations within the tested visual field. In the 1970s and 1980s, static perimetry became automated and termed standard automated perimetry (SAP).

The release of the Humphrey Field Analyzer (HFA) (Zeiss Inc., Dublin, CA, USA) in the 1980s was foundational to the popularity of SAP, though it was preceded to market by the Octopus (Haag-Streit, Bern, Switzerland). Standard automated perimetry largely replaced the office use of kinetic perimetry, though when it (and a skilled technician) are available, Goldmann perimetry remains invaluable for testing patients who are unable to complete SAP and for evaluating the temporal crescent. The HFA was shown to detect visual field loss earlier than Goldmann perimetry, further securing it as the standard of care.2

The innovation of testing strategies on the HFA from the 1980s through the 2010s is an example of how perimetry has advanced commensurate with computing technology.3

An early HFA strategy was the Full Threshold 30-2 algorithm that tested the central 30° at intervals of 6°. The threshold value in decibels (dB) was determined with a “double crossing” of the threshold at each point location. A stimulus was presented and if the light was seen, it was repeatedly presented 4 dB dimmer until it was not seen (threshold was reached). Then, the light was increased in intensity by 2 dB steps until it was seen. The test was begun with four primary points, one in each quadrant, to determine the threshold for those points. Subsequently, the threshold value obtained for each seed (primary) point was used as the starting value to determine the threshold for the other points in the respective quadrant.4 The technique was effective at determining the threshold values but was limited by the long test duration (about 15 minutes per eye). To reduce test time, a secondary version decreased the testing area to the central 24°. Therefore, 54 points instead of the original 76 were tested. Two points were retained to 27° in the nasal field to assist in glaucoma detection and monitoring. This condensation of the tested field led to shorter test times and reduced variability.5

Other attempts to shorten the test have resulted in increased variability which was an unacceptable trade-off. For example, the FASTPAC strategy was introduced in the 1990s. To shorten the test, there was a “single crossing” of the threshold value, and the decrease and increase in intensity was done in 3 dB steps instead of the original 4 dB down and 2 dB up. Though the test duration was 30–40% faster, these modifications resulted in decreased sensitivity and increased variability, causing the strategy to fall out of favor.6,7

In the late 1990s, Bengtsson and Heijl developed a powerful strategy, the Swedish Interactive Threshold Algorithm (SITA), that has become a solution to the test duration and reliability quandary. The SITA Standard incorporated several time-saving changes while limiting variability. Though the strategy details are proprietary, SITA built in tester-influenced variables such as speed of stimulus and estimations of the threshold based on test responses. This allowed stimuli to be presented faster for patients who were responding faster and incorporated shortcuts that allowed the test to terminate earlier based on the consistency of responses. This yielded a test time half of the preceding Standard Full Threshold test.8,9

Swedish Interactive Threshold Algorithm Standard was modified further into the SITA Fast algorithm. The SITA basics were the same between the tests, with one main time-saving alteration. Both tests relied on an “information index”, a dynamic test factor that governed the test accuracy in real-time. Once the “information index” approached a pre-determined confidence limit, it moved on to another point. In SITA Standard, the test did not stop unless there was at least one crossover of the threshold. In SITA Fast, there were times the test moved on despite not crossing the threshold. In other words, the SITA Fast was designed with a more lenient confidence limit which limited the time SITA Fast would spend on a single point. This sacrificed accuracy for speed and left clinicians to decide if it was an acceptable trade-off in their practice.10

In the 2010s, SITA Faster was created as an updated version of SITA Fast, cutting test duration even further. Designers instituted additional time shortcuts, including but not limited to testing the primary points only once instead of twice, testing the blind spot once instead of twice, discontinuing false-negative catch trials, relying on gaze tracking rather than the previous Heijl–Krakau blind spot method, and removing the delay after an unseen stimulus.4 These changes resulted in an additional 30% time reduction from SITA Fast and a 50% reduction from SITA Standard.11 Accordingly, a standard threshold 24-2 visual field test now takes approximately 2 minutes per eye with SITA Faster compared to the original 15 minutes with the Full Threshold 30-2 Algorithm. Though the SITA Faster strategy has not been ubiquitously adopted, the data show SITA Faster retained the reliability of the SITA Fast while making the test shorter. Again, clinicians must decide if this is an acceptable tradeoff for their patients.11

Tracking these developments on the HFA gives one an appreciation for the effort that has been exerted to shave off minutes (while retaining reliability) for the comfort of our patients. I see parallels in this development to the burgeoning field of virtual reality perimetry (VRP).

Virtual reality (VR) is an immersive technology that utilizes a goggle-like head-mounted device (HMD) with a Bluetooth-connected handpiece to control on-screen functions. Virtual reality is best known for its game applications that seemingly transport the participant into another realm. As VR has flourished in the entertainment industry, the technology has been leveraged into the health space.

While the HFA remains the gold standard, VRP has been the most disruptive addition to the perimetry space in decades. One strength of VRP is the portability of the test, expanding the option of remote testing (though some require a Wi-Fi connection). Therefore, visual fields can be completed in the clinic, the hospital, or even in patient homes. Second, test positioning is not constrictive. This is particularly useful for patients with restrictive neck conditions that preclude satisfactory positioning at the HFA, and for children and smaller adults. This also translates to patients that are unable to fully sit up, such as patients who need testing as part of hospital consults, or other bed-bound patients. The ability to acquire formal visual fields in a myriad of environments provides tremendous utility.

It is inevitable VRP will gain momentum in the coming years. The COVID-19 pandemic has broadly impacted society, including illuminating the vulnerability of clinic-based medical care. With technologies emerging that can monitor disease in the safety of one’s home, we can pivot our traditional model. Telemedicine has been a boon to other subspecialties but has been limited within ophthalmology due to our dependence on device-based data gathering (intraocular pressure, optic coherence tomography, visual fields, fundus photos). With technical advancements similar to those highlighted in visual field testing, we will likely see more time and effort spent on developing robust telemedicine protocols to augment in-clinic care. The more time we can free up in the clinical exam chair will be beneficial to our urgent and medically unstable patients.

There are many VRP devices commercially available or in development.12–17 It is unclear what device(s) are going to emerge as the preferred system (Table 1). One example is the Olleyes VisuALL (Olleyes, Inc., Summit, NJ, USA). The VisuALL is commercially available and can detect visual field defects in patients with glaucoma (Fig. 1).12 One strength of the Olleyes system is an included pediatric-specific test algorithm. The VisuaALL K utilizes a game-based format the engage the attention of children;13 the HFA has neither such a format nor a normative database for children. Other commercially available instruments, all in various stages of development and validation, are listed in the table below. Details regarding the individual instruments and their degree of published validation are not provided as this field is moving so quickly.

While VRP is promising, the current state has some limitations. At this point, there are only limited data confirming the validity of the thresholding algorithms. As such, it is unclear if these programs will have adequate sensitivity to detect subtle field defects or accurately monitor their progression. We expect that this limitation will be resolved satisfactorily in the upcoming years. In addition, though electronics are developing at a rapid rate, there remain technical limitations on how luminance is translated to bits on a monitor.16 At the high end of the logarithmic dB range (very dim stimulus), it is nearly impossible to distinguish the low luminance values with adequate confidence intervals.17 For example, a 30-dB diminution of a standard 255-bit stimulus target requires the illumination of less than a single (0.25) bit. To reach the normal foveal threshold of 36 dB, the stimulus intensity must diminish an additional 75%. This is a challenge across the field, but technology will likely outpace this limitation in short order.

Though HFA remains the gold standard, VRP is working to find its place. Tracing the iterations of the HFA strategies may parallel the upcoming development of VRP technology. There is undoubtedly space for new technology alongside the current “gold standard” as society and healthcare evolve. The promising innovation in perimetry will be exciting to track through the coming years. 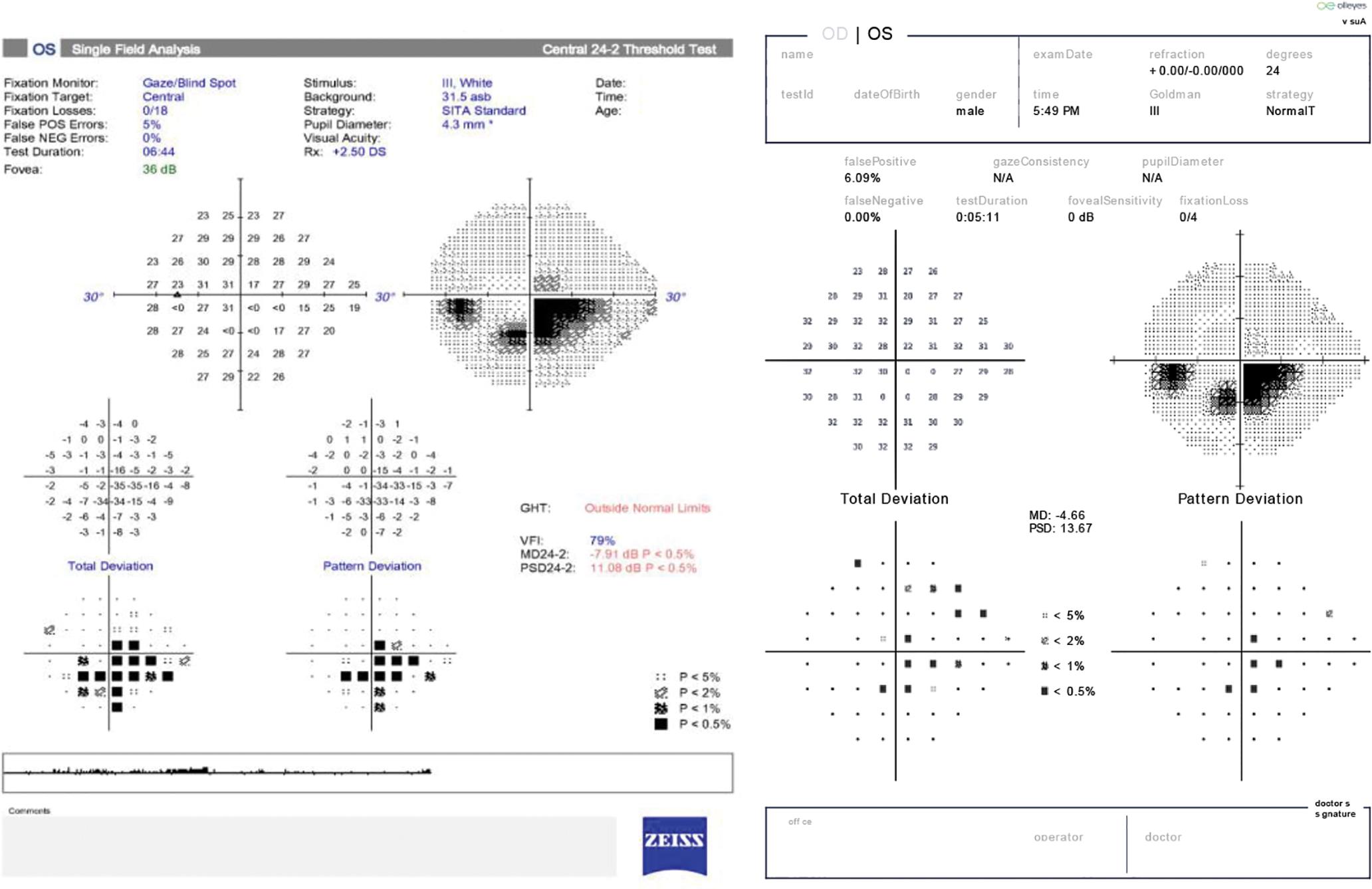