Background: Drainage devices have been used for refractory pediatric glaucoma. To avoid early hypotony and corneal damage, Mermoud et al. introduced the augmentation of a XEN implant with a Baerveldt tube. In some cases, this technique fails to lead to a high intraocular pressure (IOP) and surgical revision.

Case description: Three cases of children with this combined implant needed surgical revision due to high IOP. Three different approaches were performed: XEN replacement in one case, stretching the Baerveldt’s tube into the anterior chamber (AC) in the second case, and explant of the device followed by an implant of a new Baerveldt-250 in the same quadrant in the third case. Successful control of IOP (>18 mm Hg) was achieved in all patients under no topical treatment.

Conclusion: Despite the attractiveness of the XEN-augmented Baerveldt implant in refractory pediatric glaucoma as an alternative to conventional surgery, we have to learn how to deal with failures. Three different approaches are presented with good short-term results. The long-term efficacy is yet to be assessed.

Glaucoma drainage devices (GDD) are an attractive option for secondary childhood glaucoma which poorly respond to angle surgery.1,2 The Baerveldt glaucoma implant (BGI, Johnson and Johnson Vision, New Jersey, United States) is a non-valved device, which may provide slightly better long-term intraocular pressure (IOP) control but with more short-term complications, in comparison to other GDD.1,3,4 Recently, a new technique was developed to combine the XEN gel stent (Allergan, Dublin, Ireland) inserted ab externo in the anterior chamber (AC) connected to the Baerveldt tube in the subconjunctival space. The XEN acts as a flow restrictor because of its thinner internal lumen diameter (45 μm) compared with the BGI (300 μm).5 The XEN-augmented Baerveldt technique hypothetically minimizes two potential complications associated with BGI (early hypotony and late corneal decompensation). To date, only one small case series (10 patients) was published using this technique for pediatric patients with a short follow-up time (median 13 months).6

Three pediatric glaucoma patients with XEN-augmented Baerveldt implantation were submitted to surgical revision, due to uncontrolled IOP, after a mean of 14 ± 4.6 months (9–18 months).

A 17-year-old Caucasian girl with bilateral uveitic glaucoma secondary to juvenile idiopathic arthritis, under treatment with adalimumab and mycophenolate mofetil. In the right eye, there was a history of multiple surgeries (cataract surgery, trabeculectomy with multiple revisions, two Ahmed tube implantations and explantations, and cyclodestructive procedures). In the left eye, the patient had been eviscerated years ago (due to a painful blind eye). The best correct visual acuity (BCVA) was 20/60 and IOP was 24 mm Hg under maximum therapy (latanoprost, brimonidine/timolol, and acetazolamide). Therefore, new tube implantation was planned. XEN-augmented Baerveldt was implanted in the superotemporal quadrant, using the technique described by Mermoud et al.5 Intraocular pressure remained controlled with no topical medication during 18 months when it started to rise again with no response to maximum medical therapy. Surgical revision was undertaken (Fig. 1A). During the procedure, XEN obstruction was detected, confirmed by trypan blue with a technique described elsewhere7 and XEN was replaced with a new one. At last follow-up, after 16 months after revision, BCVA was 20/25, anterior persistent uveitis was controlled with immunosuppressive therapy, and IOP was 12 mm Hg with no topical medication. 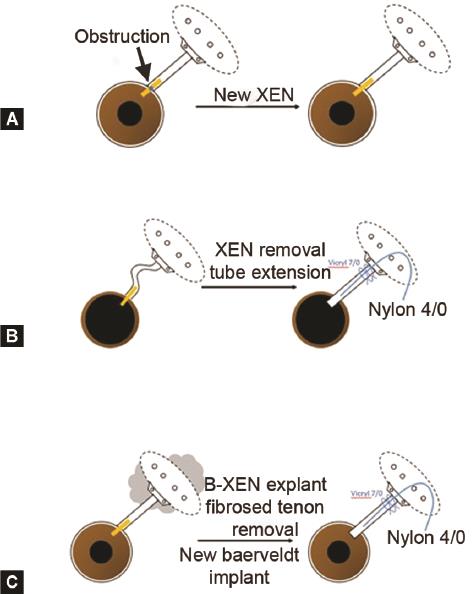 A 9-year-old Caucasian girl with bilateral glaucoma secondary to aniridia with nystagmus and BCVA 20/80 in both eyes. Owing to uncontrolled IOP (40 mm Hg under latanoprost, brinzolamide/timolol and acetazolamide), surgery was planned. The patient was submitted to XEN combined Baerveldt implant in the left eye. Five months later, due to elevated IOP, bleb revision was conducted, but with limited success. However, as IOP remained above 20 mm Hg with maximum topical therapy, a full surgical revision was planned (Fig. 1B). The XEN stent was removed and the kinked Baerveldt tube stretched into the AC [technique described by Grehn et al.6 which implies a non-linear tube path to accommodate for ocular growth if needed]. After 15 months’ follow-up, IOP was controlled (12 mm Hg) under no medication.

Case 3 (Implant of a New Baerveldt)

A 2-year-old Caucasian girl with bilateral congenital glaucoma secondary to Peters anomaly type I. The patient had previously undergone rigid-probe trabeculotomies (180° superior and inferior) and cyclodestruction with a diode laser. Intraocular pressure remained elevated, so XEN-augmented Baerveldt implantation was undertaken in the left eye, with good IOP control for 8 months. Due to a new raise of IOP, with no response to maximum medical therapy, further diode cyclodestruction was performed. No improvement was verified; the surgical revision was undertaken (Fig. 1C). During surgery, subconjunctival scarred tissue over the plate was removed and as tube was too short to be extended into the AC, we proceeded to Baerveldt and XEN explant and implantation of a new BGI-250 in the same quadrant. Nylon 4/0 suture inside the tube and vicryl 7/0 around the tube were used for flow restriction. At last follow-up, after 9 months, IOP was 10 mm Hg with no therapy.

Resorting to the XEN-augmented Baerveldt technique must be taken with caution and after balancing the attractiveness of the procedure regarding its theoretical advantages with the lack of long-term data. As with any new technique, after surgeons attempt to start these surgeries are yet to define the optimal way to solve its complications.8 In these case reports, surgical revision consisted of three different approaches: only replacing the XEN; removing the XEN, and extending the Baerveldt’s tube into the AC; explant of XEN-augmented Baerveldt and implant a new BGI. Any of the three solutions were revealed to be effective in controlling IOP and no other medications were necessary during 14 ± 4.6 months of follow-up.

Although the XEN is very malleable and easy to insert, it is also very fragile, easily deformed, and even broken. Moreover, the XEN is made from porcine collagen, which might possibly induce a stronger inflammatory response, in comparison to the silicone of the Baerveldt tube. In cases 1 and 2, XEN was obstructed and damaged. In the first case, we also hypothesized that as it was a uveitic patient, inflammatory cells might get collected in the XEN and led to an obstruction. Hence, XEN replacement seemed to be the best option, less costly and with few trauma-inducing little ocular inflammation. Arad et al.6 used the same management in the obstruction XEN cases. In the second case, as the Baerveldt tube was originally placed with a lateral kink (so if the eye grew, straightening the tube segment could accommodate for those extra mm and preclude the need to replace the GDD in its entirety), it was possible to remove the XEN and stretched the Baerveldt’s tube in AC. Surgical lengthening seems a cost-effective option, as it avoids more invasive procedures or the uncertainty of the duration of a second XEN implant and has shown good results.6 Finally, when the plate itself is firmly encapsulated by a dense fibrotic tissue creating a high resistance (third case), none of the above options are possible. In such cases, a new GDD was implanted after the removal of the original one. This solution should be avoided whenever possible because it is more invasive, costly, and probably a new surgical intervention will be needed to remove the stent.

Among GDD, XEN-augmented Baerveldt implantation is an additional option for the treatment of refractory pediatric glaucoma. Despite some literature reports proving an advantage in controlling IOP and no safety concerns during the critical early postoperative, as a filtering procedure, it is bound to eventually have failures. Our report aims to help the Baerveldt-XEN surgeons when faced with the need to act.

In these case series, the combined technique XEN-augmented Baerveldt was used for the treatment of pediatric glaucoma patients. We describe three possible options when faced with a need for surgical revision, adapted to each situation. Short-term results seem promising in all approaches.