Aim and objective: To report a case with emulsified silicone oil (SO) droplets in the Schlemm’s canal (SC), encountered during prolene hemi-gonioscopy-assisted transluminal trabeculotomy (hemi-GATT).

Background: In cases with a history of previous pars plana vitrectomy (PPV) with SO tamponade and then SO removal; glaucoma might occur secondary to the presence of emulsified SO droplets. Minimal invasive glaucoma surgeries targeting trabecular meshwork such as GATT surgery might be an ideal treatment option in these cases.

Case description: A 57-year-old man presented with uncontrolled intraocular pressure (IOP) and topical anti-glaucoma drug intolerance in his left eye. The patient had a history of PPV with SO tamponade and then intravitreal SO removal 5 years ago. He had a history of Ahmed glaucoma valve (AGV) implantation 2 years ago for the treatment of secondary glaucoma but he was still using topical anti-glaucoma medication. However, IOP was measured as 17 in the left eye. Hemi-gonioscopy-assisted transluminal trabeculotomy was performed successfully to get the patient off medication. During the surgery, SC was full of SO droplets.

Conclusion: The presence of SO droplets in the SC might contribute to the development of secondary glaucoma after PPV and SO removal. This might be another surgical indication for GATT surgery in these risky eyes.

Different treatment options for this type of glaucoma are possible such as selective laser trabeculoplasty or trabeculotomy, tube surgery, diode lasers, and express shunt.3–5 However, in cases with a history of vitreoretinal surgery, gonioscopy-assisted transluminal trabeculotomy (GATT) can be an alternative treatment option if the gonioscopic examination reveals an open angle without any broad peripheral anterior synechias.6 It can also be performed after the SO removal if the patient has secondary glaucoma due to residual SO droplets in the eye.

With this case, we aimed to demonstrate the presence of SO droplets in the Schlemm’s canal (SC) during the hemi-gonioscopy-assisted transluminal trabeculotomy (hemi-GATT) surgery.

A 57-year-old man presented with uncontrolled intraocular pressure (IOP) and topical anti-glaucoma drug intolerance in his left eye. The patient’s ocular history revealed that he had a history of PPV with SO tamponade and then intravitreal SO removal 5 years ago. Then, he had Ahmed glaucoma valve (AGV) implantation surgery for the treatment of secondary glaucoma developing 3 years after the SO removal. However, he was still on one anti-glaucoma medication. BCVAs were 20/30 and 20/200; IOPs were measured as 14 and 17 mm Hg; in OD and OS, respectively. Both eyes were pseudophakic and the tube implant was in the anterior chamber (AC) with its normal position. On fundoscopic examination, the retina was attached in both eyes and he had 0.3 and 0.7 cup-to-disc ratios in both eyes, respectively.

Gonioscopic examination revealed Shaffer grade III angle and no synechia in the inferior quadrant. He was intolerant to all classes of medications including prostaglandins, beta-blockers, and fixed combinations for a long time, so surgical treatment was planned. Since he had no peripheral anterior synechia inferiorly, inferior hemi-GATT surgery was performed as an addition to AGV. Surgical steps were as follows:

After a standard sterile preparation of the patient, the eye was draped and a lid speculum was placed. Temporal and superior paracentesis was placed using a 23-G microsurgical blade. A viscoelastic material (sodium hyaluronate) was injected into the AC. The microscope and the patient’s head were then oriented to visualize the gonioscopic structures under the view of the Swan–Jacob goniolens. A 1–2 mm goniotomy was created using a microvitreoretinal (MVR) blade through the temporal site paracentesis. Right after the goniotomy, a bolus of emulsified SO droplets came out of the SC (Fig. 1). 6-0 prolene suture with a blunted tip by the hand-held cautery was introduced into AC through the superior quadrant paracentesis toward the angle. Microvitreoretinal forceps are then introduced through the same temporal site and the blunted tip of the 6-0 prolene suture was grasped with MVR forceps and then introduced into the SC. The suture was advanced in the canal inferiorly using the MVR forceps. Then, proximal part of the suture was pulled and inferior hemi-GATT was completed. Then, AC was irrigated very well to wash the reflux bleeding and SO droplets spilled into the AC from the SC.

At the 2nd month follow-up, IOP was under control and measured as 10 mm Hg without any medication (Fig. 2). Trabeculotomy area was noted inferiorly and nasally both with gonioscopy and anterior segment optical coherence tomography (Fig. 3).

Gonioscopy-assisted transluminal trabeculotomy surgery has been introduced to the ophthalmology literature in 2014 by Grover et al.7 It has been shown to reduce IOP successfully in cases with primary, juvenile, and secondary open-angle glaucomas.8,9 It has the advantage of being blebless surgery and also being an efficient angle procedure since it tears up the TM all the way around. It can also be performed in cases with a history of incisional glaucoma surgeries.

In cases with a history of previous PPV with SO tamponade and then SO removal; glaucoma might occur secondary to the presence of emulsified SO droplets. Normally the rates of glaucoma following uncomplicated PPV and intravitreal SO injection could be as high as 56% at 8 months; however, recent studies started to report lower rates and it might be the result of the improvements of the vitreoretinal surgical techniques.10 Higher viscosity SO has been reported to cause fewer SO droplets and secondary glaucomas.11

This type of glaucoma has been attributed to trabecular inflammation or emulsified SO droplets in the TM. This can develop in secondary open or closed angles after the PPV.12,13

Quan et al.6 have recently reported the results of GATT surgery in patients with secondary open-angle glaucoma after vitreoretinal surgery. In this study, they retrospectively evaluated the results of eight patients, in which only five of them underwent PPV with SO tamponade and all of them had already SO in the vitreous cavity at the time of GATT surgery.

In these cases with glaucoma secondary to SO droplets after PPV and SO removal, if medical treatment fails; filtering and tube surgery may be indicated as well. However, in those with a history of PPV and conjunctival scarring, tube surgery might be a better option.

This case was intolerant to all classes of anti-glaucoma medications throughout his follow-up. He first had tube surgery for the treatment of emulsified SO droplet glaucoma but unfortunately, he needed one anti-glaucoma medication to reach the target IOP 4 months after the tube surgery. IOP was 17 with AGV plus one medication. However, he had severe allergic reactions to all classes of medications and intolerance again. Thus, GATT surgery was planned as an adjunct to AGV to have the patient off medication. Since the IOP was already controlled with medication, inferior hemi-GATT (180°) was performed instead of conventional GATT surgery. Hemi-gonioscopy-assisted transluminal trabeculotomy might also have the advantage of causing less hyphema because of its less invasive nature compared to 360° GATT according to our clinical observations.

Interestingly, during the surgery, it was noted that SC was full of emulsified SO droplets spilled into the AC right after the goniotomy. Madanagopalan et al.14 showed emulsified SO droplets in the SC with AS-OCT in a 55-year-old male patient with emulsified SO completely filling the AC. On the other hand, SO droplets might also transfer through the sclerotomy site or tube.15,16 Silicone oil removal and its role in reducing IOP is controversial. Its success rate on IOP reduction ranges from 0 to 93.4% in the current literature.17 Despite multiple attempts of air-fluid exchange for the removal of SO, it is hard to get rid of all SO droplets spilled into the eye. In the current case, despite he had a history of SO removal, he still had SO droplets in the eye; but mostly in the SC while almost none in the AC. We noticed that SC was full of emulsified SO droplets right after the goniotomy incision. Thus, this might explain why IOP might be resistant that much even after the SO removal in these eyes.

To the best of our knowledge, our case is the first one that emulsified SO droplets have been shown during GATT surgery. Thus, in these eyes with a history of PPV-SO removal and secondary glaucoma, the angle should be checked. If the angle is open GATT or hemi-GATT surgery as a primary or an adjunctive surgery makes sense in these cases since the primary mechanism might be TM dysfunction secondary to emulsified SO droplets or their presence in the SC as we have reported here. On the other hand, GATT surgery brings the advantages of its minimally invasive nature, which is very important in patients with scarred conjunctiva due to previous PPV and SO removal surgeries. 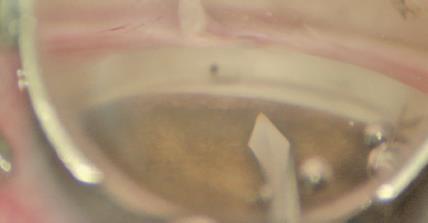 Fig. 1: Silicone oil droplets coming out of the Schlemm’s canal after the goniotomy 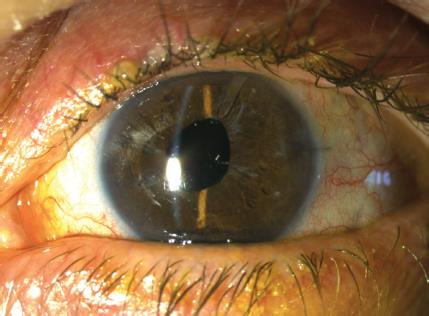 Fig. 2: Postoperative appearance of the eye 2 months after the surgery 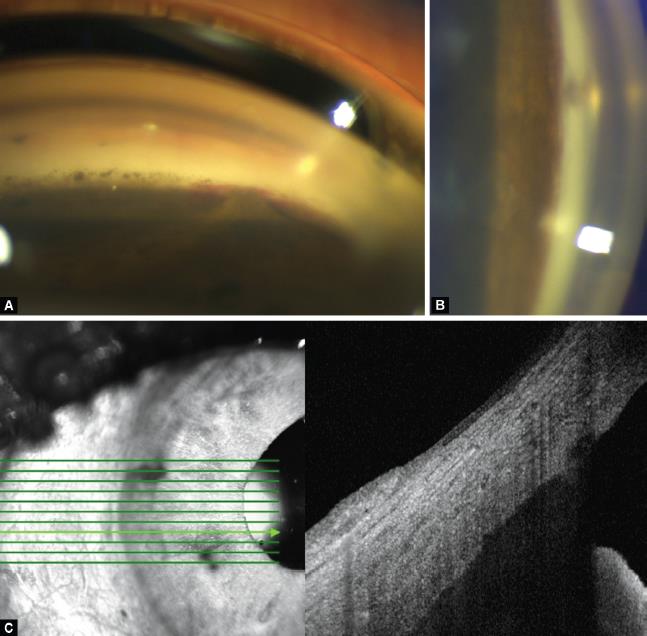 Figs 3A to C: Inferior angle, peripheral anterior synechia, and blood reflux in the Schlemm’s canal and pigments over the angle (A); nasal angle, white posterior wall of the Schlemm’s canal (B); Anterior segment optical coherence tomography showing trabeculotomy area (C); 2 months after the surgery

The presence of SO droplets in the SC might contribute to the development of secondary glaucoma after PPV and SO removal. Gonioscopy-assisted transluminal trabeculotomy or hemi-GATT surgery might be safe and effective surgical techniques in secondary open-angle glaucoma cases with a previous history of PPV and SO removal. Future prospective and randomized studies are needed to demonstrate its success in these cases.

Silicone oil droplets might be seen in the SC and contribute to the development of glaucoma after PPV and SO removal. Gonioscopy-assisted transluminal trabeculotomy might be the less invasive and targeted surgical treatment method for the treatment of these cases.

15. Senn P, Büchi ER, Daicker B, et al. Bubbles in the bleb: troubles in the bleb? Molteno implant and intraocular tamponade with silicone oil in an aphakic patient. Ophthalmic Surg 1994;25(6):379–382.