Materials and methods: A cross-sectional survey of 124 members of the Canadian Ophthalmological Society (COS) who perform LTP was conducted. Descriptive statistics and Chi-square comparative analyses were performed on anonymous self-reported survey data.

Results: Of the 124 respondents, 34 (27.4%) completed a glaucoma fellowship. Use of selective laser trabeculoplasty (SLT) (94.4%) was preferred over argon laser trabeculoplasty (ALT) (5.6%). The most frequently cited reasons for SLT preference was less damage to trabecular meshwork (30.7%), availability (16.2%), and repeatability (16.2%). In all, 47.6% of the respondents performed LTP concurrently with medical treatment, 33.9% used it after medical treatment, and 17.7% used it as first-line treatment. Majority (87.1%) of the respondents believed that SLT is effective when repeated. In suitable patients, 41.9% of the respondents stated on average they repeat SLT once, 26.6% twice, and 19.4% greater than 2 times, respectively. Of those who repeat SLT on patients, 80.7% found repeat SLT treatments have good outcomes for patients. In all, 105 (84.7%) ophthalmologists responded they would benefit from an LTP practice guideline. Significantly more ophthalmologists without glaucoma fellowships perceived they would benefit from a practice guideline (p value %3C;0.001).

Conclusion: This survey provides valuable practical information on how LTP is used in the treatment of glaucoma in Canada.

Clinical significance: The findings may serve as a baseline survey to trend future practices.

Glaucoma is the leading cause of irreversible blindness worldwide.1,2 Recent studies have estimated glaucoma to affect 79.6 million3 and 111.8 million4 people by 2020 and 2040, respectively. It is associated with irreversible visual field defects caused by chronic, progressive optic neuropathy. Vision loss can be delayed or prevented through early treatment initiation. There are several treatment methods for glaucoma, including medical therapy, laser therapy, and incisional surgeries. All these treatments aim to lower intraocular pressure (IOP), which delays the progression of optic neuropathy.

Compared to its predecessor, ALT, SLT uses less energy and does not cause coagulative damage to the trabecular meshwork.5 For this reason, SLT has been suggested to have successful repeatability. However, in decreasing IOP, both SLT and ALT have been shown to be similar in efficacy.9–16 Many studies12,14,17–23 have explored how SLT compares to ALT, where it fits in the glaucoma treatment algorithm and the most effective way to administer SLT. However, physician practice patterns and perceptions have not been reported in Canada. This study aims to investigate Canadian ophthalmologists’ LTP practice patterns, with an emphasis on SLT.

An anonymous survey with 26 item electronic was distributed to members of the Canadian Ophthalmological Society (COS) including the Canadian Glaucoma Society. The questionnaire was validated for content, clarity, and comprehensiveness by three glaucoma specialists. Treatment indications, algorithm and techniques, and questions specific to SLT were investigated. Respondents who did not use LTP in their practice were excluded. The initial invitation, with one follow-up reminder e-mail 3 weeks later, was sent in the Spring of 2018. The survey data included multiple-choice and free-text questions. Data were entered in a spreadsheet. Descriptive statistics was performed. The frequencies and relative frequencies are reported for each question. Chi-square test with continuity correction or Fisher’s exact test were used for group comparison. A p value of 0.05 was considered for statistical significance, and SPSS software v.24 (Armonk, NY: IBM Corp) was used for data analysis. For comparisons, variable for length of practice was dichotomized to less than 15 years and greater than or equal to 15 years of practice.

A total of 124 responses were included in the analysis. It is unknown how many COS members perform LTP. The response rate was estimated to be 33.3% as 34 of the 94 glaucoma subspecialty members responded. Of the respondents, 71.8% identified as having a comprehensive practice, 25.8% glaucoma practice, and 2.4% other subspecialty practice. With regard to length of practice, 30.2% practiced less than 15 years, and 69.8% practiced greater than or equal to 15 years. Majority of the participants practiced out of a private clinic (82.3%).

Table 1 summarizes the responses to questions regarding LTP practice patterns. Fifty-nine (47.6%) of the respondents used LTP concurrently with medical treatment, 42 (33.9%) used LTP after medical treatment but before surgery, and 22 (17.7%) used it as first-line treatment of glaucoma. Figure 1 demonstrates most respondents used LTP for treatment of primary open angle glaucoma (100.0%) and pseudoexfoliation glaucoma (91.9%), whereas only about a quarter did for steroid-induced glaucoma. Past clinical experience (42.7%) and evidence in the literature (40.3%) were perceived by respondents to influence their practice the most. Majority of the respondents used SLT (94.4%) compared to ALT (5.6%). The most frequently cited reasons for SLT preference was less damage to trabecular meshwork (30.7%), availability (16.2%), and repeatability (16.2%). All but one respondent who preferred ALT stated that they only have access to ALT. After the introduction of SLT, 72.6% reported their use of ALT decreased and 17.7% reported they never used ALT to begin with. Majority (84.7%) of the respondents stated they would benefit from a practice guideline for LTP. 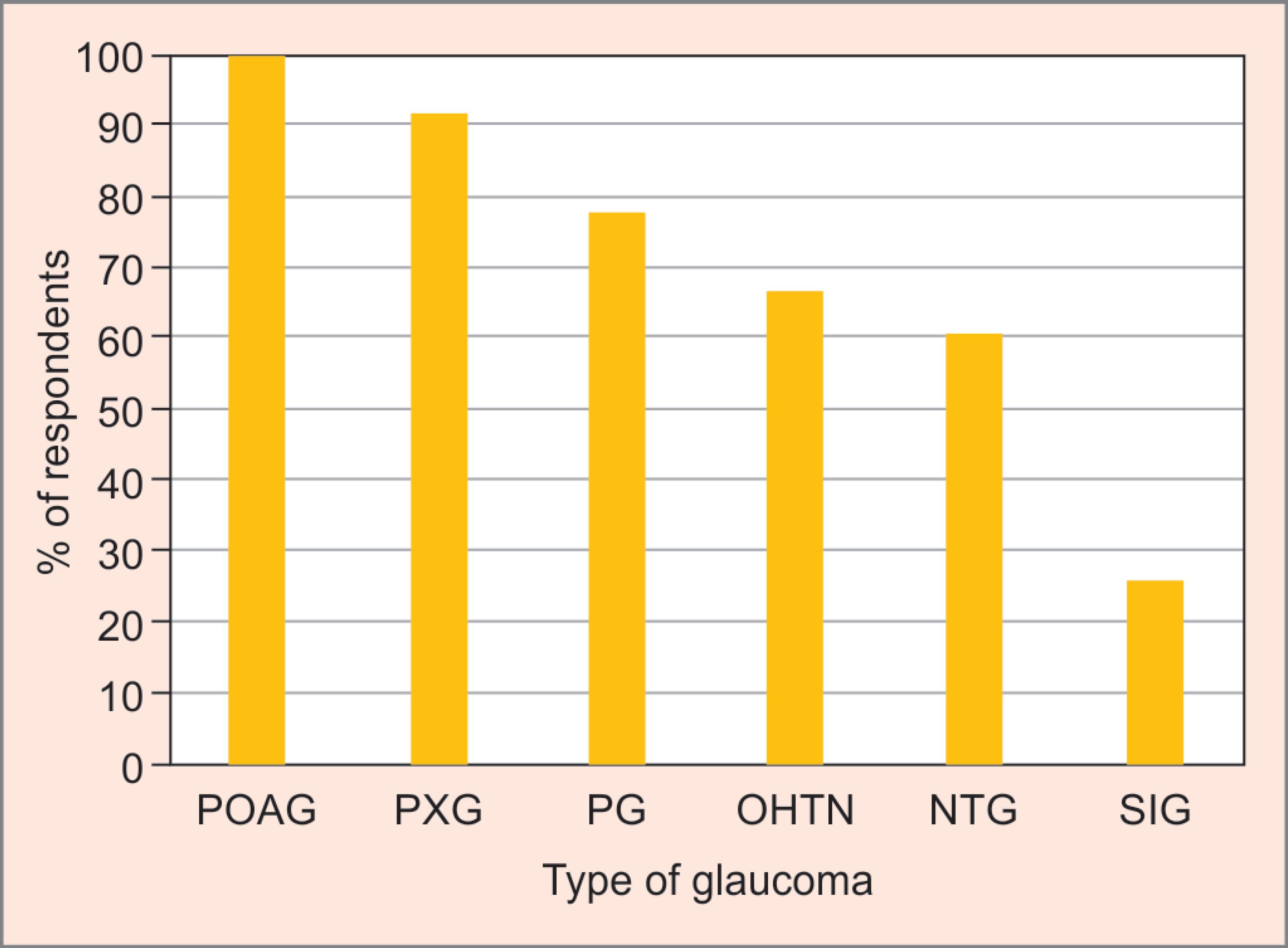 Impact of Practice Duration and Glaucoma Fellowship on Practice Pattern

There was no association between the length of practice and practice patterns in terms of laser preference (p value = 0.437), treatment algorithm (p value = 0.347), perception of predictors of success (p value = 0.179), or repeatability of SLT (p value = 0.145). Similarly, no association was found between glaucoma fellowship training and these factors. However, significantly more comprehensive ophthalmologists desired a practice guideline for LTP (p value <0.001) and perceived they were not up-to-date on recent SLT research (p value = 0.003) compared to glaucoma subspecialists. 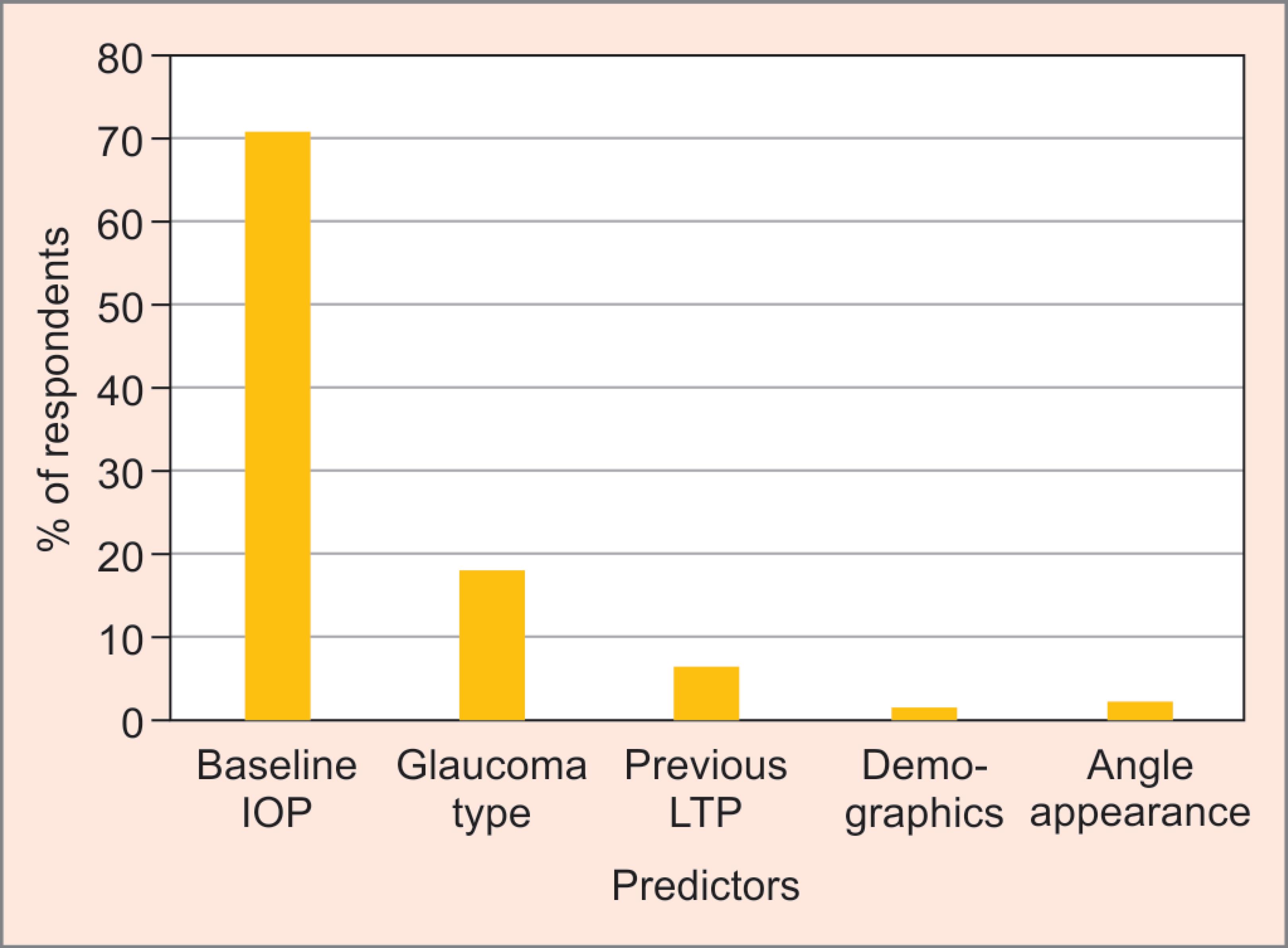 This study reviews the LTP perception and practice patterns of Canadian ophthalmologists. Of the responding COS members who perform LTP, only a quarter were glaucoma subspecialists. This is in keeping with Campbell et al.’s findings of an increase in the provision of clinic-based glaucoma services, including laser trabeculoplasty, by non-diversified cataract surgeons in Canada.24 Given an increasing role of comprehensive ophthalmologists in glaucoma management and laser treatments, it is important to ensure competencies in these domains are achieved during residency training. This is supported by the fact that 42.7% and 15.3% of the respondents’ main influence on LTP practice pattern was from past clinical experience and residency training, respectively. Furthermore, significantly more comprehensive ophthalmologists perceived they were not up to date on recent SLT research (8.6% vs 34.8%, p value = 0.003) and desired LTP practice guidelines (78.9% vs 18.1%, p value <0.001) compared to glaucoma subspecialists. This may suggest the need for dedicated continuing medical education resources25,26 and best practice guidelines, including recommendations on treatment algorithms and laser settings, for non-glaucoma specialists.

In terms of practice, our study confirms27–29 that ALT was largely replaced with SLT upon its introduction. The most significant reason (30.7%) was that SLT causes less trabecular meshwork damage. Reasons following were repeatability (16.2%) and availability (16.2%). Of the very few respondents (n = 4), who continue to use ALT in their practice, the main reason was availability. Our study demonstrates that laser availability influences LTP practice patterns of Canadian ophthalmologists. No previous comparative studies were found on the availability and access to LTP. Although ALT and SLT have similar efficacies in lowering IOP, SLT has been suggested to be more safe and repeatable.30–32 Given the high technological turnover in ophthalmology, there is a need to ensure new treatment modalities with proven benefits are accessible to all patients.

Only 17.7% of responding ophthalmologists used LTP as a first-line therapy. SLT has been shown to have comparable efficacy and success rate as primary medical monotherapy.33–36 Recently, the LiGHT trial showed SLT treatment group, when compared to medical treatment group, maintained target IOP (93.0% vs 91.3%) at more visits, and required less surgical management (0 vs 11 patients) in a 36 month period.37 SLT was also found to be more cost effective compared to medications.37 The study recommended that SLT should be offered as first-line treatment for OAG and ocular hypertension.37 Lee and Hutnik also demonstrated that the use of primary SLT over mono-, bi-, and tri-drug treatment produced a 6 year cumulative cost saving of $580.52, $2042.54, and $3366.65 per patient in the Ontario Health Insurance Plan, respectively.38

Furthermore, SLT has low complication rates31 and may help reduce occurrence of ocular surface disorders in chronic glaucoma medication users. Schwartz and Quigley found at 1 year persistence with glaucoma medications tended to be less than 50%.39 Ocular surface disorders caused by glaucoma medications has been associated with poorer glaucoma-related quality of life in patients.40,41 Furthermore, lack of adherence to glaucoma medications has been associated with worse prognosis.42,43 Thus, SLT may be a method to improve treatment adherence and patient quality of life by minimizing the number of topical medications.44 The relatively small percentage of ophthalmologists using LTP as first-line therapy may be related to the ophthalmologist’s awareness and perception of LTP effects, patient’s disease status, patient’s perception and fear of laser surgery, and the irreversible nature of LTP compared to topical medications. Nevertheless, as more evidence surfaces on LTP as initial therapy to glaucoma, there may be a future shift in paradigm for earlier use of LTP in appropriate patients.

For postoperative care, 58.9% of respondents used either topical steroid or NSAID drops. Two randomized clinical trials have demonstrated thus far that such anti-inflammatory medications do not cause a significant difference in pain, redness, anterior chamber reaction, or post-treatment IOP spike after 180- and 360-degree SLT.48,49 Future studies that demonstrate consistent results as these RCTs may warrant practice changes that make postoperative care for SLT less burdensome for patients.

SLT tends to wane in efficacy with time. In Juzych et al.’s retrospective study, success rate of 180-degree SLT was 68% at 1 year, 46% at 3 years, and 32% at 5 years after treatment.18 In Lai et al.’s prospective randomized controlled trial, 27.6% of participants treated with SLT required additional treatment at 5 year follow-up.50 Thus, many patients may benefit from repeat SLT in their lifetime. Our results show that majority (n = 109) of responding ophthalmologists repeat SLT, and 80.7% of those who repeat find it efficacious. Retrospective studies to date have shown that there is a significant IOP reduction from baseline following repeat SLT; however, magnitude is less than that of initial SLT.17,51–53 Despite limited evidence, 46.0% of the responding ophthalmologists stated they repeat SLT more than one time. Likely explanation for such practices may include patient’s preference, avoidance of surgery, intolerance to medications, and need for IOP stability, among others. Further studies are required to determine the efficacy and rationale for such practice. Additionally, although 68.3% of the respondents stated they are more likely to repeat SLT on patients with previous SLT than ALT, Birt’s study demonstrated that there is no significant difference in mean IOP reduction at 1 year between these two groups.13

This study provides novel information on practice patterns and perceptions of ophthalmologists performing LTP that are not available from studies conducted through OHIP or Medicare databases. Our response rate was adequate and comparable to other internet-based and subspecialist surveys. Limitations to this study include those inherent to the design, such as low response rate and recall bias. However, our response rate of 33% align with published surveys in the literature. Furthermore, most of the questions were in multiple-choice format which limited the response to the choices provided. The study was also limited to the survey length and provides a superficial overview of LTP practice patterns. For instance, this survey did not explore other LTP modalities, such as, micropulse laser trabeculoplasty and titanium-sapphire laser trabeculoplasty. Future studies may benefit from exploring how practice is altering with introduction of these newer modalities.

To the best of our knowledge, this is the first study to evaluate the LTP practice patterns and perceptions of Canadian ophthalmologists. Our results show high concordance between Canadian ophthalmologists in well studied areas of LTP; however, in the more controversial areas, there is variability. This survey provides a baseline to which future trends in glaucoma laser treatment can be compared, as new evidence and laser modalities arise.

Poster Presentation at 2019 COS annual meeting.