Aim and objective: To present a case of bilateral delayed-onset hyphema following the administration of a 1% tropicamide and 2.5% phenylephrine fixed combination ophthalmic agent, in the late follow-up period of a gonioscopy-assisted transluminal trabeculotomy (GATT) combined with cataract extraction.

Background: Gonioscopy-assisted transluminal trabeculotomy consists on a 360° trabeculotomy through an ab interno approach that may also be combined with cataract surgery. Delayed-onset hyphema has been reported with trabecular minimally invasive glaucoma surgery (MIGS) procedures. Some proposed mechanisms are ocular compression and decompression during sleeping on the surgical side and episcleral venous pressure rise after physical activity.

Case description: We describe the case of a 68-year-old female patient with ocular hypertension (OHT) and bilateral cataracts who underwent uncomplicated combined GATT and cataract extraction surgery. Postoperatively, 8 months after the left eye (OS) surgery and 3 months after the right eye (OD) surgery, patient came for routine evaluation. After induced mydriasis, slit-lamp evaluation revealed the presence of 3+ OD and 4+ OS erythrocytes in the anterior chamber (AC). Prednisolone acetate was prescribed q.i.d. and remission of hyphema was achieved after 2 weeks. Subsequently, 4 months later, the pupil dilation was again induced showing 4+ erythrocytes in both eyes (OU), layered hyphema in the inferior quadrant OS, and intraocular pressure (IOP) spike OU. The intraocular pressure was controlled after oral acetazolamide was prescribed. Topic prednisolone was initiated, and after 1 week, the hyphema was resolved in OU.

Conclusion: Delayed-onset microhyphema may occur following induced mydriasis even months after the uncomplicated GATT procedure. Ophthalmologists should be aware of the possibility of microhyphema after induced mydriasis and the risks that this might represent with noteworthy and repeated IOP spikes which may eventually require treatment.

Reduction of IOP is currently the only treatment available for glaucoma.1 At present, trabeculectomy and tube shunts are the surgical gold standard for this disease. Nevertheless, these procedures could be associated with serious adverse events and often require close monitoring during the first postoperative months.2,3 Minimally invasive glaucoma surgery techniques provide some potential advantages over the conventional filtering procedures such as a high safety profile, capacity to lower IOP, and rapid recovery with minimal trauma to adjacent structures. However, they provide a smaller reduction of IOP than traditional glaucoma surgery and, therefore, remain as an option in OHT and in mild-to-moderate glaucoma stages.4,5

Gonioscopy-assisted transluminal trabeculotomy surgery was first described by Grover et al. and consists on a 360° trabeculotomy through an ab-interno approach. This surgery has demonstrated good results in primary and secondary open-angle glaucoma and may also be combined with cataract surgery.6

Delayed-onset hyphema has been reported with trabecular MIGS procedures.7,8 Some proposed mechanisms are ocular compression and decompression during sleeping on the surgical side and episcleral venous pressure rise after physical activity. We present a case of bilateral delayed-onset hyphema following the administration of a 1% tropicamide and 2.5% phenylephrine fixed combination ophthalmic agent, in the late follow-up period of a gonioscopy-assisted transluminal trabeculotomy (GATT) combined with cataract extraction.

A 68-year-old female with OHT was referred to our center for evaluation of bilateral cataracts. Corrected distance visual acuity (CDVA) was 20/70 on the right eye (OD) and 20/50 the left eye (OS). The IOP was OD 18 mm Hg and OS 14 mm Hg. Slit-lamp examination revealed bilateral posterior subcapsular cataract. Gonioscopy identified Shaffer grade IV angles in both eyes (OU). On fundus examination, cup-to-disc ratio was 0.4 and 0.5 in OD and OS, respectively. Patient was on maximum medical treatment OU with latanoprost 0.005% once every day and a triple combination of dorzolamide 2% + brimonidine 0.20% + timolol 0.5% twice daily (Krytantek Ofteno®; Sophia Laboratories, Guadalajara, Mexico). She also had history of selective laser trabeculoplasty OU.

Uncomplicated combined GATT and cataract extraction were performed first in OS and 5 months later in OD. As expected, a small amount of blood reflux from the collector channels was observed during surgery after trabeculotomy was performed. The AC was washed and a small amount of viscoelastic was left in the eye to avoid hypotony and bleeding. Hyphema has been cleared in both eyes by the first month and the patient remained stable with IOP of 14 mm Hg on four antiglaucoma medications in OD and 15 mm Hg on three antiglaucoma medications in OS. Postoperative CDVA was 20/20 OU.

Eight months after OS surgery and three months after OD surgery, the patient went to the office for routine evaluation. Slit-lamp examination did not show any abnormalities. The IOP was 16 mm Hg OU. Gonioscopy showed peripheral anterior synechiae (PAS) in four quadrants in her OD and inferiorly and nasally in her OS. For fundus evaluation, mydriasis was achieved after the administration of 1% tropicamide and 2.5% phenylephrine fixed combination (T-P Ofteno®; Sophia Laboratories, Guadalajara, Mexico). An hour following the mydriatic administration, slit-lamp evaluation revealed 3+ OD and 4+ OS erythrocytes in the AC. Prednisolone acetate was prescribed q.i.d. OU, and ASA was suspended. Remission of hyphema was achieved after 2 weeks.

Twelve months after OS surgery and 7 months after OD surgery, the patient was evaluated again for routine control. Slit-lamp evaluation revealed 0.5+ erythrocytes in OU. Traces of blood were seen on gonioscopic examination of OS in the inferior quadrant. We administered the same mydriatic eye drops, and an hour later, slit-lamp evaluation showed again 4+ erythrocytes in the AC in OU (Fig. 1). Goldmann applanation tonometry after dilation was 25 mm Hg OD and 28 mm Hg OS. Gonioscopy after the pupil dilation revealed persistence of the previously described PAS, a small amount of blood reflux through the collector channels in OU and grade I hyphema (<1 mm) in OS (Fig. 2). The patient was prescribed 250 mg oral acetazolamide and the IOP reduced to 18 mm Hg OD and 19 mm Hg OS. Prednisolone acetate eye drops was initiated q.i.d. in OU. After 1 week, the hyphema has been resolved in OU.

Gonioscopy-assisted transluminal trabeculotomy is a minimally invasive surgical procedure described by Grover et al. in 2014 which consists on a 360° trabeculotomy through an ab-interno approach for primary and secondary open-angle glaucomas.9 In GATT, trabeculotomy is performed using 5-0 prolene suture or the iTrack™ 250-μm microcatheter (Ellex Medical Lasers Pty Ltd., Adelaide, Australia). It can be done combined with cataract surgery or as a stand-alone procedure in pseudophakic or phakic patients with open angles.

Recently, Grover et al. published results from 24-month follow-up GATT procedure. The mean IOP reduction in patients with primary open-angle glaucoma (POAG) was 37.3%. Hyphema was the most common complication, though almost all resolved during the first postoperative month visit. Only one POAG patient who underwent combined cataract extraction and GATT was diagnosed with recurrent hyphema at 18 months visit. However, no details of the possible mechanism were described.10

Delayed-onset hyphema has been reported with trabecular MIGS procedures. A series of patients reported on a recent study presented a symptomatic delayed-onset hyphema after trabectome surgery (Neomedix Corp., Tustin, CA, USA) lacking further surgeries or trauma. From 262 trabectome surgery cases, 4.6% developed a delayed-onset symptomatic hyphema. Some patients presented recurrent hyphema, and the mean time of presentation was 8.6 months postoperatively. Likely mechanisms proposed for these patients were ocular compression and decompression during sleeping on the surgical side, and the episcleral venous pressure rises after physical activity.7 A recently published report described a 77-year-old woman with history of uncomplicated phacoemulsification cataract surgery combined with iStent implantation (Glaukos Corporation, Laguna Hills, CA, USA) and experienced delayed-onset hyphema 13 and 19 months after surgery. Since the patient reported blurry vision after she awoke, possible theories regarding recurrent hyphema were increase of episcleral venous pressure attributed to postural effect and ocular compression-decompression with the pillow when sleeping on the surgical side.8 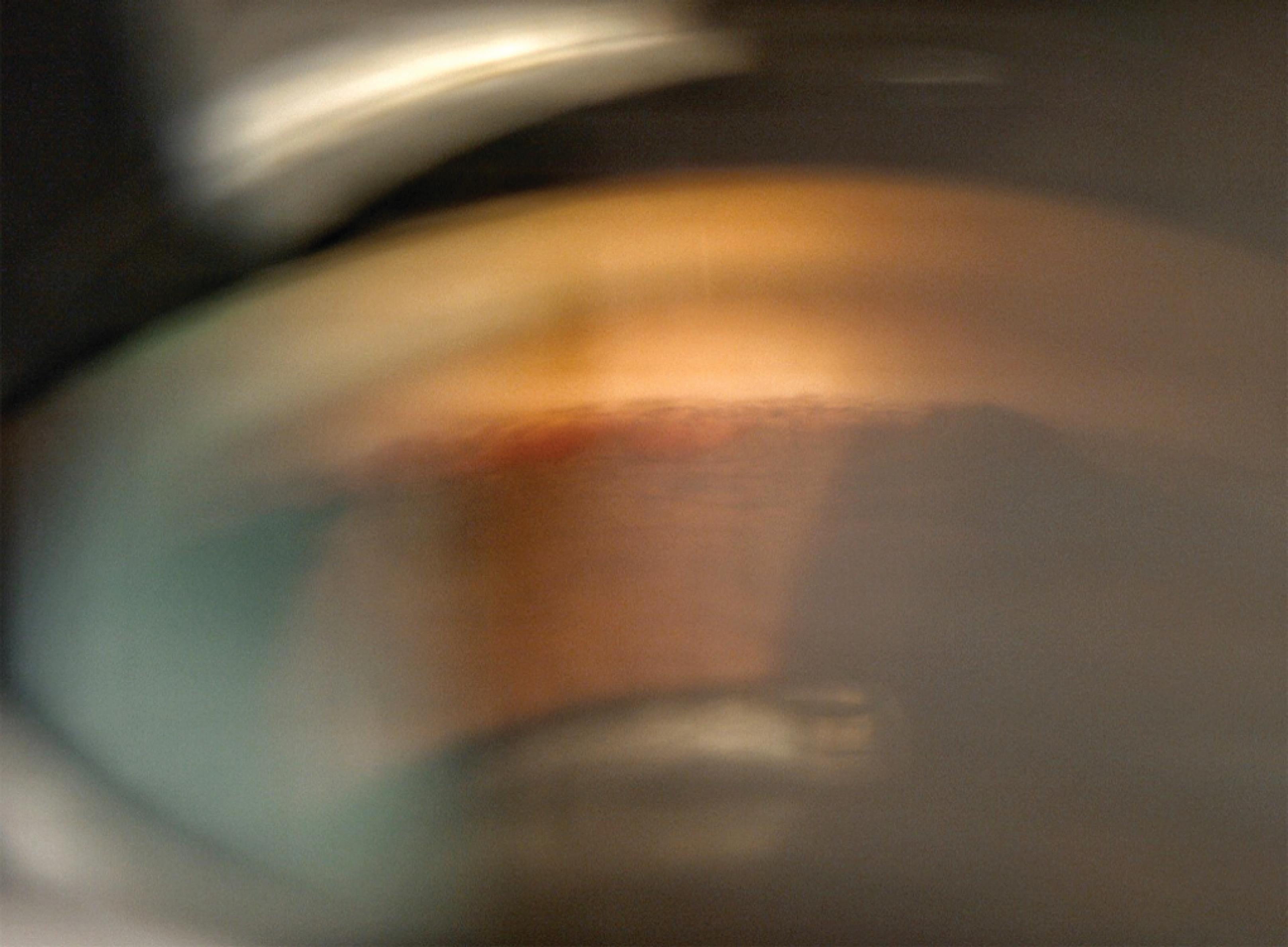 Fig. 2: Gonioscopy showing layered hyphema of less than 1 mm of heme collected in the inferior angle of the left eye of the presented patient

Our patient’s hyphema had a clear association with pharmacologic-induced mydriasis. Gonioscopy after dilation showed a small amount of blood reflux through the collector channels in both eyes and important increase in erythrocytes in the AC in OU. This could be explained by AC angles widening following dilation caused by mechanical forces from a posterior pull of the iris-lens diaphragm and blood reflux through the collector channels. Kim et al. evaluated IOP and anterior chamber depth (ACD) changes using Visante optical coherence tomography (OCT) in 32 eyes of 32 phakic patients after administering 1% tropicamide and 2.5% phenylephrine. Increase in ACD values was reported to be statistically significant before and after the pupillary dilation of 3.09 ± 0.48 mm and 3.20 ± 0.45 mm, respectively.11 Furthermore, Dastiridou et al. used spectral domain OCT to evaluate AC angle measurements in 20 phakic patients under several circumstances such as physiologic mydriasis in a darkened room or postpharmacologic mydriasis, finding that the latter yielded the widest angle opening.12 However, as far as we know, no studies have been carried out to evaluate changes in AC angle measurements of pseudophakic patients following pharmacologic-induced mydriasis. Another theory could be a transient reduction in IOP following the administration of the mydriatic eye drops that may have caused blood reflux through collector channels and subsequently a microhyphema that induced an increase in IOP. Kim et al. also found that from the 32 eyes that are evaluated, 22 eyes had an increase in IOP, 8 remained the same, and 2 had a reduction in IOP. This low rate of IOP reduction might explain how not all patients that go through the pupil dilation after GATT develop microhyphema.11

Pharmacologic pupillary dilation in the pigment dispersion syndrome (PDS), POAG, and exfoliation syndrome may result in significant pigment liberation into the AC, leading to elevated IOP secondary to acute obstruction of the aqueous outflow pathway attributable to the pigment granules deposits.13–15 After dilation, mechanical rubbing between the iris pigmented epithelium and the zonular bundles in PDS cause pigment release that then deposits on the lens capsule in the exfoliation syndrome. Given the fact that in our patient-induced pupillary dilation that led to the release of red blood cells, this mechanism is considered very unlikely. Another possible reason could be related to flare and cell number modification on aqueous after the pupillary dilation. Petternel et al. evaluated 20 eyes from 20 patients who were enrolled for cataract surgery and for the measure of aqueous flare before and after the pupil dilation with tropicamide 0.5% in specific timings: 30, 90, and 180 minutes. Their findings were that flare decreased during the pupil dilation.16 Therefore, it seems unlikely that this could explain hyphema onset following pharmacologic-induced mydriasis.

Regarding oral medications, our patient was taking ASA, vitamin E, and omega 3. Rebleeding has been described among patients taking ASA after traumatic hyphema.17,18 Despite the fact that our patient was using ASA during the first episode of microhyphema, ASA is most likely not related to recurrent hyphema given the fact that she had stopped ASA 4 months before the second episode. As for vitamin E and fish oil supplements, even though there have been studies supporting possible anticlotting activity associated with vitamin E and reduced platelet aggregation in healthy subjects with omega 3,19–21 our patient had a clear association with hyphema onset and mydriatic agent instillation. Furthermore, she did not complain about bleeding elsewhere.

To our knowledge, this is the first reported case of bilateral delayed-onset hyphema following the administration of a fixed combination of phenylephrine and tropicamide eye drops after combined GATT and cataract extraction.

Delayed-onset hyphema may occur months after the uncomplicated GATT procedure. Ophthalmologists should be aware of the possibility of microhyphema after induced mydriasis and the risks that this might represent with noteworthy and repeated IOP spikes which may eventually require treatment.

Delayed-onset hyphema and IOP spikes may occur following the pupil dilation with fixed combination of phenylephrine and tropicamide eyedrops after the uncomplicated GATT procedure.