Aim: We present a case of successful reduction of intraocular pressure (IOP) in a patient with Sturge–Weber syndrome (SWS) and moderate open angle glaucoma using a suprachoroidal shunt.

Background: Patients with SWS glaucoma often have elevated episcleral venous pressure resulting in elevated IOP. This makes the conventional pathway for aqueous humor outflow a poor target for IOP reduction, yielding it difficult to treat. Medication and procedures that facilitate uveoscleral outflow have been more successful.

Case description: We present a case where a suprachoroidal shunt device (CyPass®) was used to reduce IOP in a patient with SWS. The IOP reduction has persisted for 12 months without complication or the requirement for topical prostaglandin analog use.

Clinical significance: Glaucoma in patients with SWS has been historically difficult to treat. Previous surgical procedures that have been successful are more invasive and have required the creation of alternative drainage routes of aqueous humor. The CyPass device offers a promising less invasive option to reduce IOP in these patients.

The incidence of patients with capillary malformations is estimated to be from 0.3 to 2.1%.1,2 These cutaneous manifestations are typically present from birth and have a predilection for facial involvement.3 For those with facial capillary malformations (FCM), some go on to develop an associated ocular or neurological disorder consistent with a diagnosis of Sturge–Weber syndrome (SWS).4 The incidence of glaucoma in the eye ipsilateral to an FCM is estimated to be between 30% and 70%.3,5–7 Interestingly, the risk of neuro-ocular involvement in these patients is contingent upon its presence in the V1 dermatome. If the FCM is not present in V1, there is no increased risk of associated neuro-ocular disorders; however, if the entirety of V1 is involved, there is a 78% chance of developing an associated neuro-ocular disorder.3 Open-angle glaucoma is the most common ocular manifestations in patients with FCM in V1 and demonstrates a bimodal age distribution.8 The bimodal age distribution includes early childhood and adolescent/adulthood referred to as early-onset and late-onset, respectively. Early-onset is often related to congenital malformations of the angle, whereas late-onset is proposed to be secondary to arteriovenous shunts into the episcleral hemangioma lending to elevated episcleral venous pressures with an open angle.5 In patients with SWS, it has been shown that the glaucomatous eye ipsilateral to the FCM has a significantly higher episcleral venous pressure as measured by a venomanometer when compared with the contralateral eye, lending further support for the role of elevated episcleral venous pressure as a likely etiology.9

Medical management using prostaglandin analogs for late-onset glaucoma in patients with SWS has been modestly effective at reducing intraocular pressure (IOP), notably as they increase aqueous outflow via the uveoscleral pathway.8,10,11 For those nonresponsive to medical management, surgical outcomes to reduce IOP in patients with SWS have been likewise inconsistently successful.8 The Ahmed glaucoma valve is one of the few surgical options shown to decrease IOP long-term in such patients as it creates an alternative drainage route for aqueous humor.12

A 52-year-old man was referred over concerns of elevated IOP and progression of glaucoma in the left eye, with normal pressure and no glaucoma in the right eye. He noted a recent onset of blurry vision in the left eye. The patient had a self-described history of poor compliance with the use of his prescribed latanoprost. On examination, best corrected visual acuity showed 20/15 on right and 20/20-2 on left. The patient’s manifest refraction was +2.75–0.50 × 153 OS and + 5.25–1.00 × 075 OD. Ultrasound pachymetry measured central cornea thickness of 521 μm in the right eye and 530 μm in the left eye. External examination showed a left-sided unilateral FCM along the V1 and V2 dermatomes with minimal V3 involvement (Fig. 1). Slit lamp examination of the right eye showed a mild nuclear sclerotic cataract but was otherwise unremarkable. Slit lamp examination of the left eye showed prominent episcleral vessels and a mild nuclear sclerotic cataract (Fig. 2). Posterior segment examination showed asymmetric optic nerve cupping with a cup-to-disk ratio of 0.3 on right and 0.7 on the left. Intraocular pressure was 12 mm Hg in the right and 30 mm Hg in the left via Goldmann applanation. 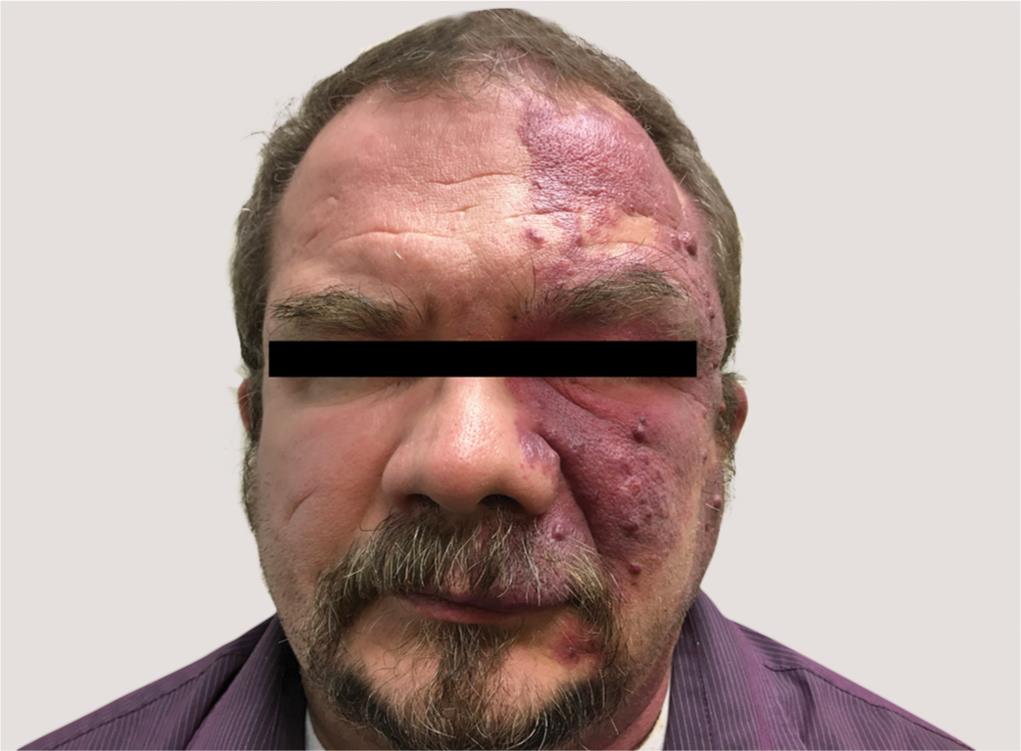 Fig. 1: Facial capillary malformation with distribution in V1 and V2 with minimal involvement of V3 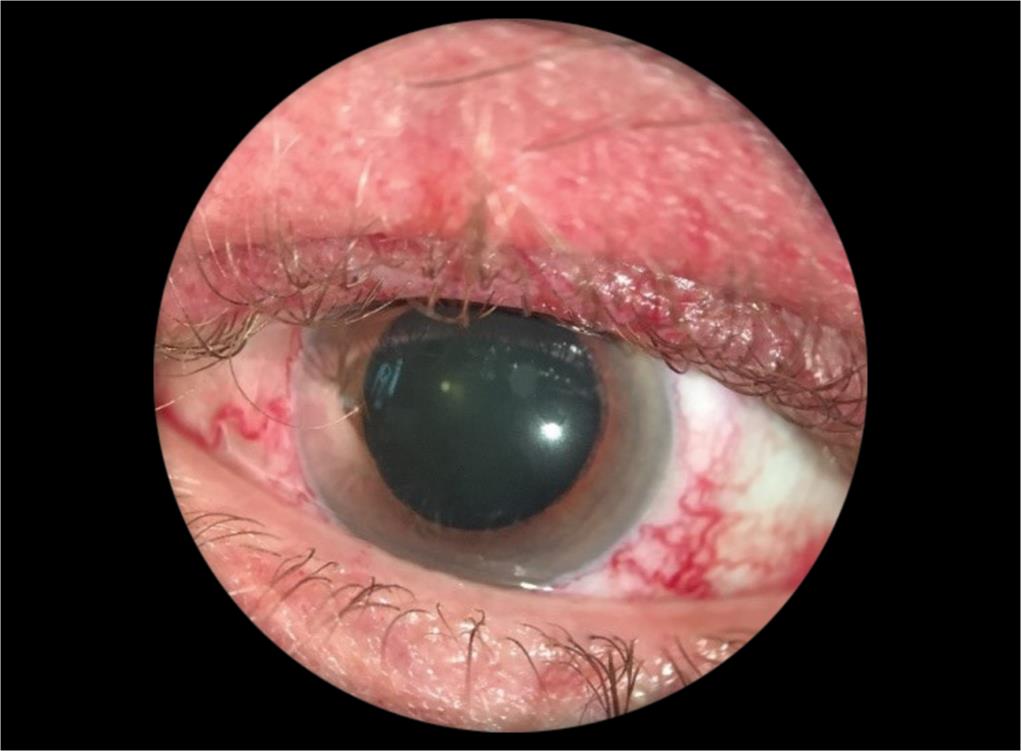 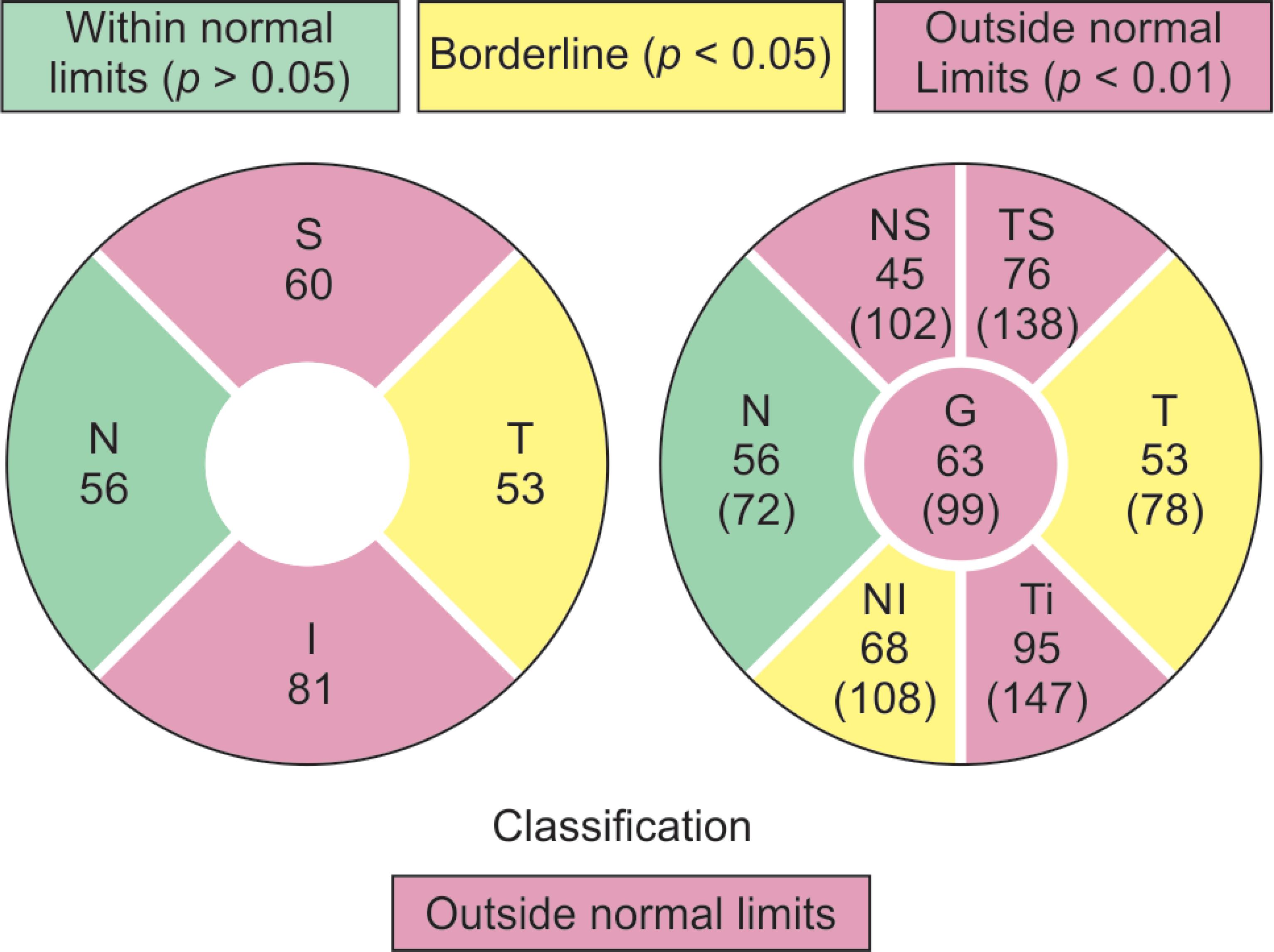 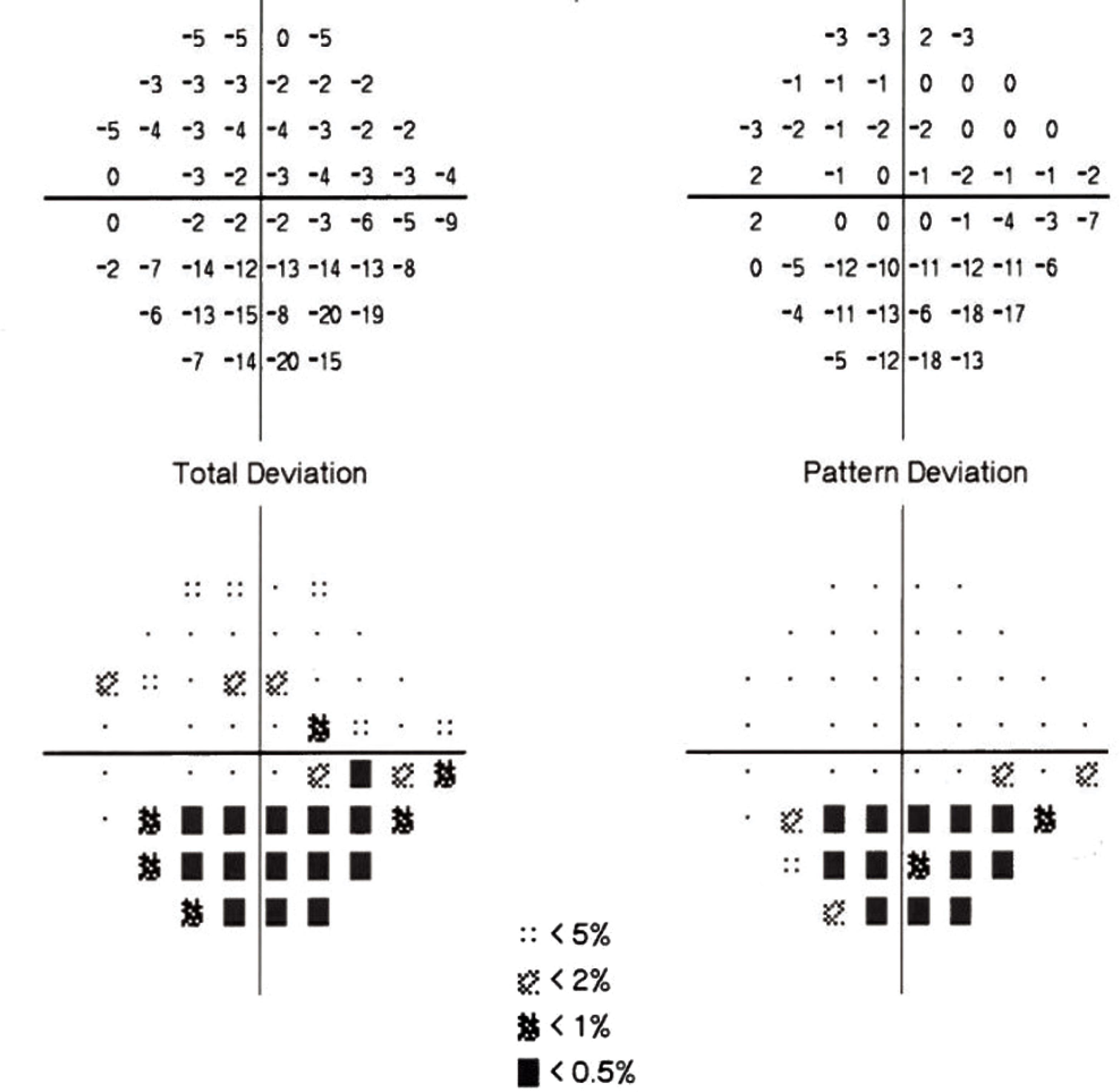 After discussing the diagnosis of moderate primary open angle glaucoma in the left eye, the options for reducing IOP were explored. The patient elected to proceed with cataract surgery plus the CyPass stent. The cataract surgery was uneventful, and the CyPass device was placed into the supraciliary space without complication. During stent placement, a reflux of blood was noted which was likely from choroidal vascular malformations that can also be present in patients with FCM.

An immediate reduction in IOP was observed. This reduction sustained through 12 months postoperatively without a requirement for topical medications (Table 1). During routine follow-up visits, prominent episcleral venous prominence has continued in the left eye, but repeated RNFL measurements have shown no progression of his glaucoma (Fig. 5). His best corrected visual acuity at 12 months was noted to be 20/20 in the right eye and 20/20 in the left eye. 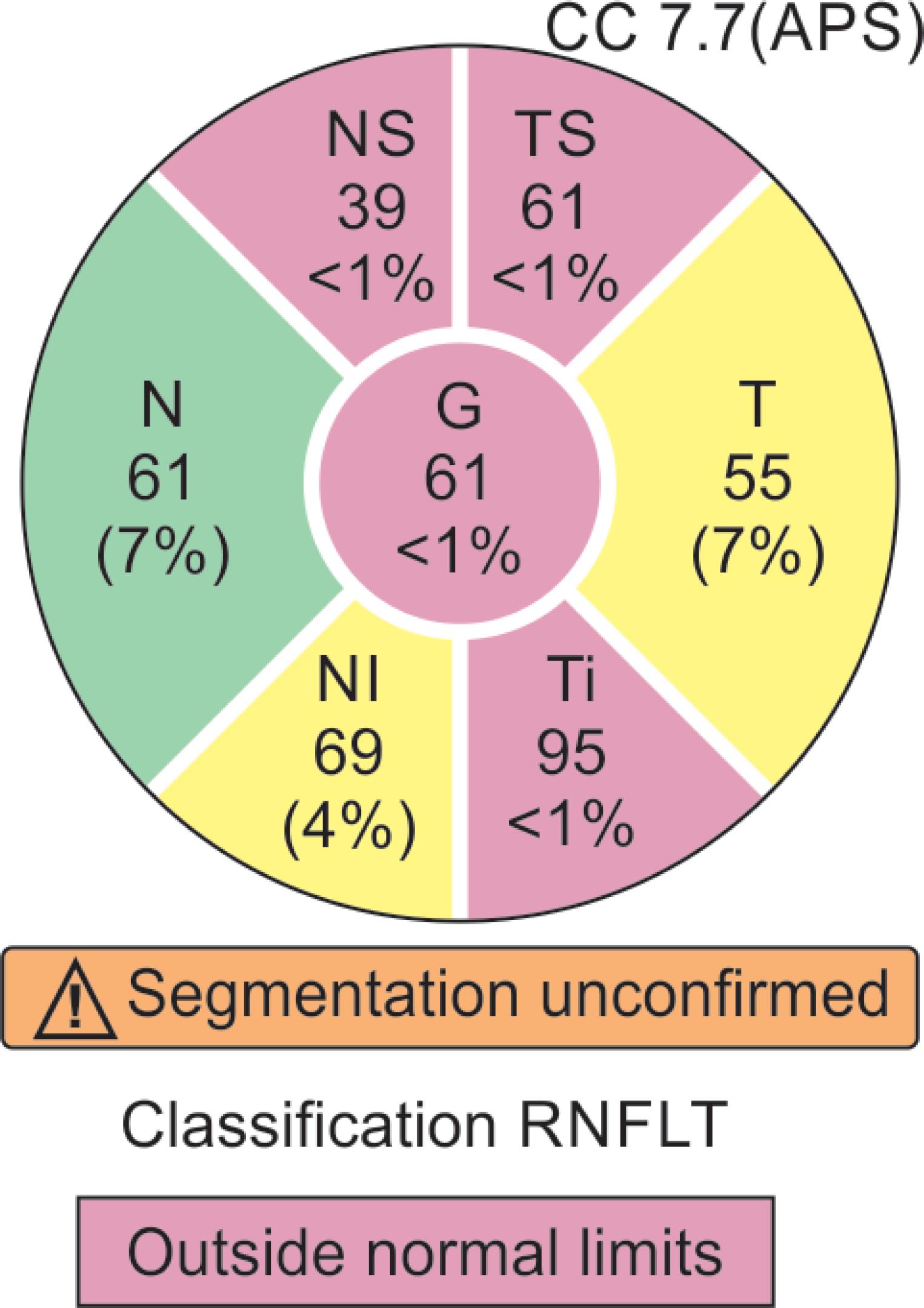 Facial capillary malformations—also known as port-wine-stains or nevus flammeus—are congenital cutaneous vascular malformations that are estimated to be present at birth in 0.3–2.1% of newborns.1,2 They are persistent throughout life and often change from a faint pink at birth to a darker violaceous color with aging. The changing FCM is significant beyond cosmetic concerns. Neuro-ocular disorders can accompany FCM with involvement of the ophthalmic branch of the trigeminal nerve.3 When the ophthalmic branch of the trigeminal nerve is involved, there is a significant increase in associated ophthalmological and/or neurological involvement.3 Glaucoma is the most frequent associated condition, often demonstrating a bimodal distribution in these individuals. Therefore, individuals with FCM in the V1 region should be screened regularly for elevated IOP from birth through adulthood.5,8

When occurring in childhood, glaucoma can be due to congenital malformations of the iridocorneal angle. In adolescent/adult years, there is often no malformation of the iridocorneal angle but rather an elevation in episcleral venous pressure.5,9 In the conventional pathway, aqueous humor outflow is thought to occur down a pressure gradient with the highest point of resistance occurring at the trabecular meshwork, namely in the juxtacanalicular connective tissue.13–15 However, in SWS, the presence of dilated episcleral veins can be a clinical clue to an abnormal pressure gradient through the conventional pathway caused by arteriovenous malformations. These malformations are characteristic of SWS and are also responsible for the FCM.5,9

At presentation, our patient did not have a diagnosis of SWS as he has no known leptomeningeal vasculature abnormalities or history of epilepsy. After diagnosing a moderate primary open angle glaucoma in the presence of an FCM in V1, V2, and V3, he meets criteria for SWS type II.16 Both the medical and surgical management of glaucoma in patients with SWS is challenging, and success is inconsistent. Previous successes were often achieved through invasive surgeries.8 The recent advancements of MIGS devices allow for a safer and more effective way to manage such patients. The CyPass stent offers an ab interno approach that is less invasive and has been shown to offer a long-term solution for lowering IOP. Placement of the stent into the supraciliary space has also been shown to decrease the need for IOP lowering medications.17 This allows for increased aqueous outflow through enhancement of a natural orifice while avoiding the elevated episcleral venous pressure in patients with SWS.

Further follow-up on this patient’s IOP will be required as current data are limited to 12 months postoperatively. Cataract extraction has been shown to modestly reduce IOP independently of additional glaucoma procedures. As a result, we cannot dismiss the potential role phacoemulsification may have played in reducing IOP in this patient.16 However, studies have shown a more significant and long-lasting IOP reduction when phacoemulsification is combined with additional glaucoma procedures.18 Some caution should be exercised when using the CyPass device in patients who have a low corneal endothelial cell density as there is some concern about accelerated cell loss in such patients when using this device. Nevertheless, the suprachoroidal pathway remains an intriguing target for future MIGS procedures or devices to treat these recalcitrant cases of glaucoma.

The uveoscleral pathway is a preferred target for IOP reduction in patients with elevated episcleral venous pressure, which often includes patients with FCM and SWS. The CyPass device offers a promising ab interno MIGS approach to reduce IOP in these patients by circumventing the pathologic pressure gradient in the trabecular meshwork, however it should be used with caution in those with a low corneal endothelial cell count.

Glaucoma in patients with SWS has been historically difficult to treat. Previous surgical procedures that have been successful are more invasive and have required the creation of an alternative drainage route for aqueous humor. Placement of a supraciliary shunt offers a promising and minimally invasive alternative to reduce IOP in patients with SWS glaucoma. This is clinically significant as management of glaucoma in these patients has historically been challenging and inconsistently effective.