Background: To evaluate the intraocular pressure (IOP), anterior chamber angle (ACA), and globe biometric parameters in β-thalassemia major children and the correlations of these changes.

One of the most common inherited blood disorders is thalassemia major. It is caused by mutation in the gene responsible for the synthesis of the beta chain of adult hemoglobin. Red blood cell maturation leads to ineffective erythropoiesis.1 Chronic anemia, iron accumulation in the tissues resulting from the red blood cell destruction, repeated blood transfusion, and the use of iron chelators (all these factors) affect organs negatively.2

β-Thalassemia affects more than 42,000 newborns every year all over the world. Populations with the highest prevalence are the Mediterranean, Central Asia, Middle East, India, and the Far East.3

The aim of this study was to find the effect of β-thalassemia on the angle of anterior chamber (ACA), intraocular pressure (IOP), and the other globe parameters.

The study included 84 eyes. Forty-two eyes of children with thalassemia major (18 male and 24 female) and 42 eyes of control healthy children of the same age-group (12 male and 30 female). The thalassemia major children are on blood transfusion iron-chelating agents. Informed consent was obtained from the parents after detailed information was given. The study protocol was approved by the declaration of Helsinki protocol.

Cycloplegic refraction (using 0.5% cyclopentolate hydrochloride) and the corneal astigmatism were determined using an auto kerato-refractometer. The final result was taken as the average of three consecutive readings.

NIDEK RS-3000 retinal scan with anterior segment module was used for anterior segment optical coherence topography (AS-OCT) measurements. Patients, with undilated pupils, fixated to AS-OCT. The ACA line was used to image the nasal and temporal angle quadrants (180° and 0° meridians). Both the quality and centration of image should be sufficient for analysis. The central corneal thickness (CCT) was measured using the cornea radial scan pattern. The best images were selected for being analyzed to measure the CCT and ACA.

The ACA width was calculated by measuring the angle between the iris tangential line and the posterior corneal surface with its apex in the angle recess.

A-scan ultrasonography was used for measurement of ocular components anterior chamber depth (ACD), lens thickness (LT), AL, and vitreous chamber depth (VCD). The monitor AandB scan biometer was used following corneal anesthesia with tetracaine HCL. The patients were requested to lay in a supine position and look at a far object to neutralize the accommodation effect on the measured LT. The fingers were used to hold the lids apart. Excessive pressure on the globe should be avoided. The measures were obtained by applying the probe tip to touch the cornea. Five measurements per eye were taken. Relative lens position is the relative position of the center of the lens which is calculated by adding half the LT to the ACD and then dividing the sum by the AL multiplied by 10 [ACD + 0.5 × LT/AL × 10].

The data were collected and then statistically analyzed by using Mann–Whitney test, independent t test, Chi-square test, and Spearman test. 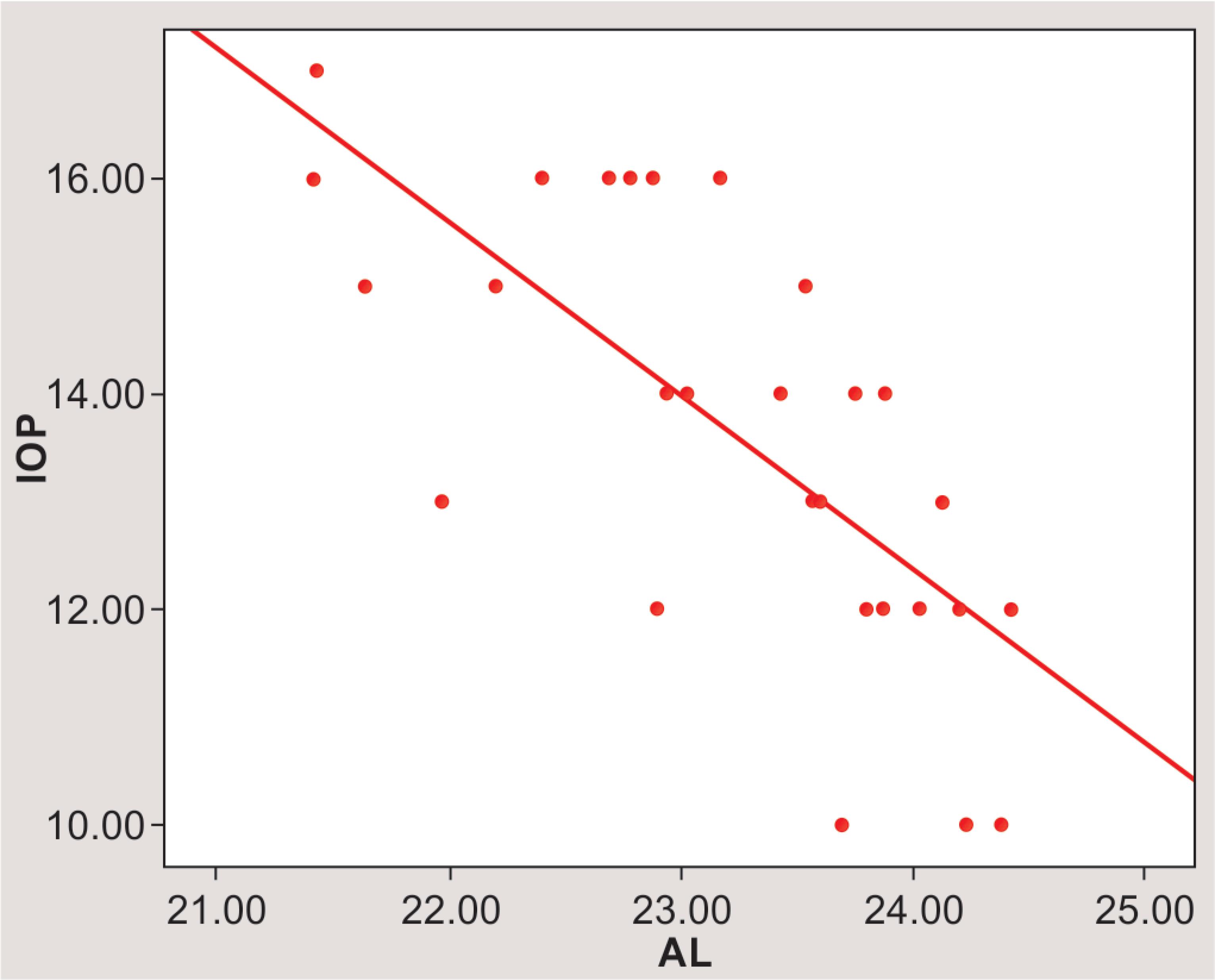 Fig. 1: A negative correlation between intraocular pressure and axial length 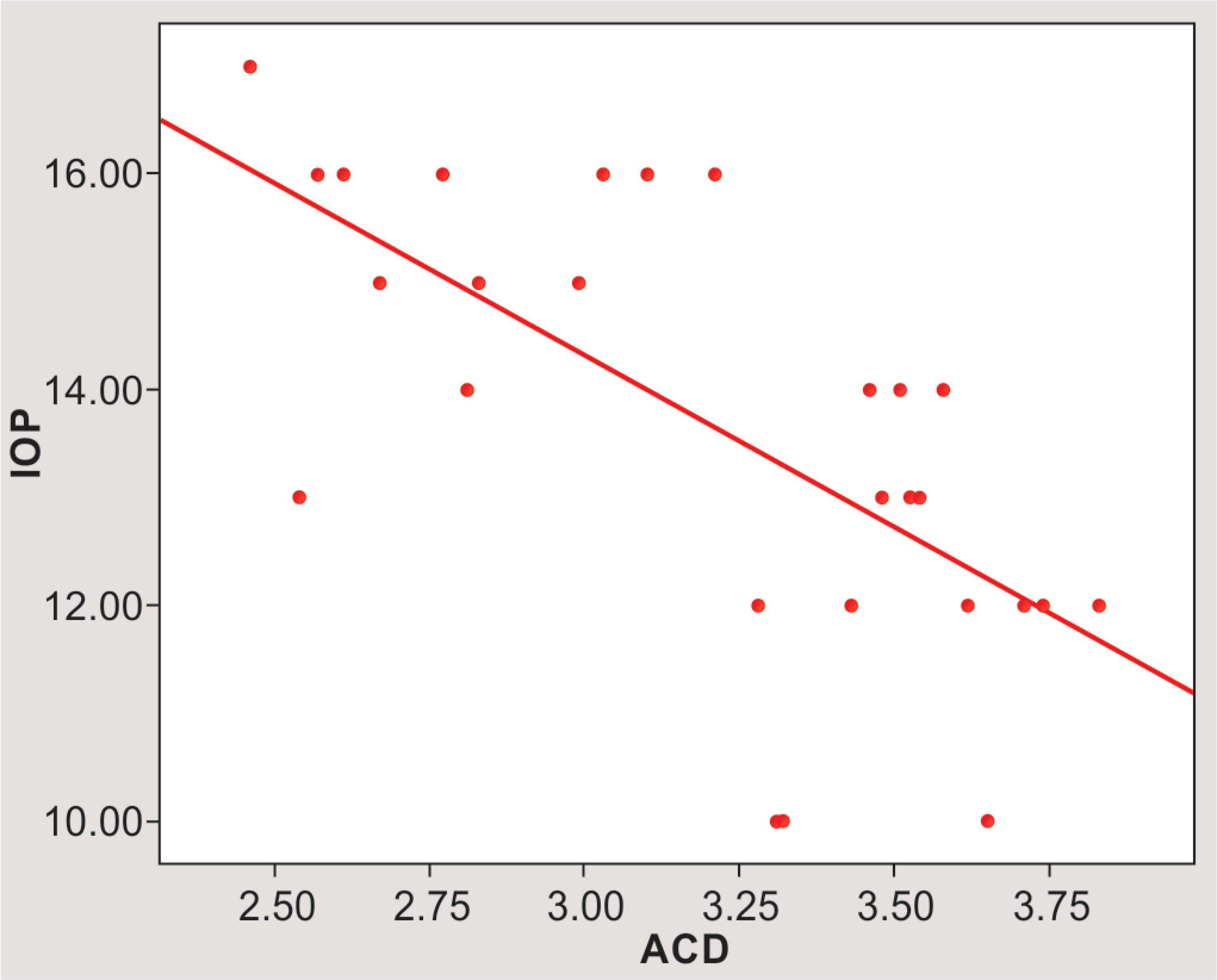 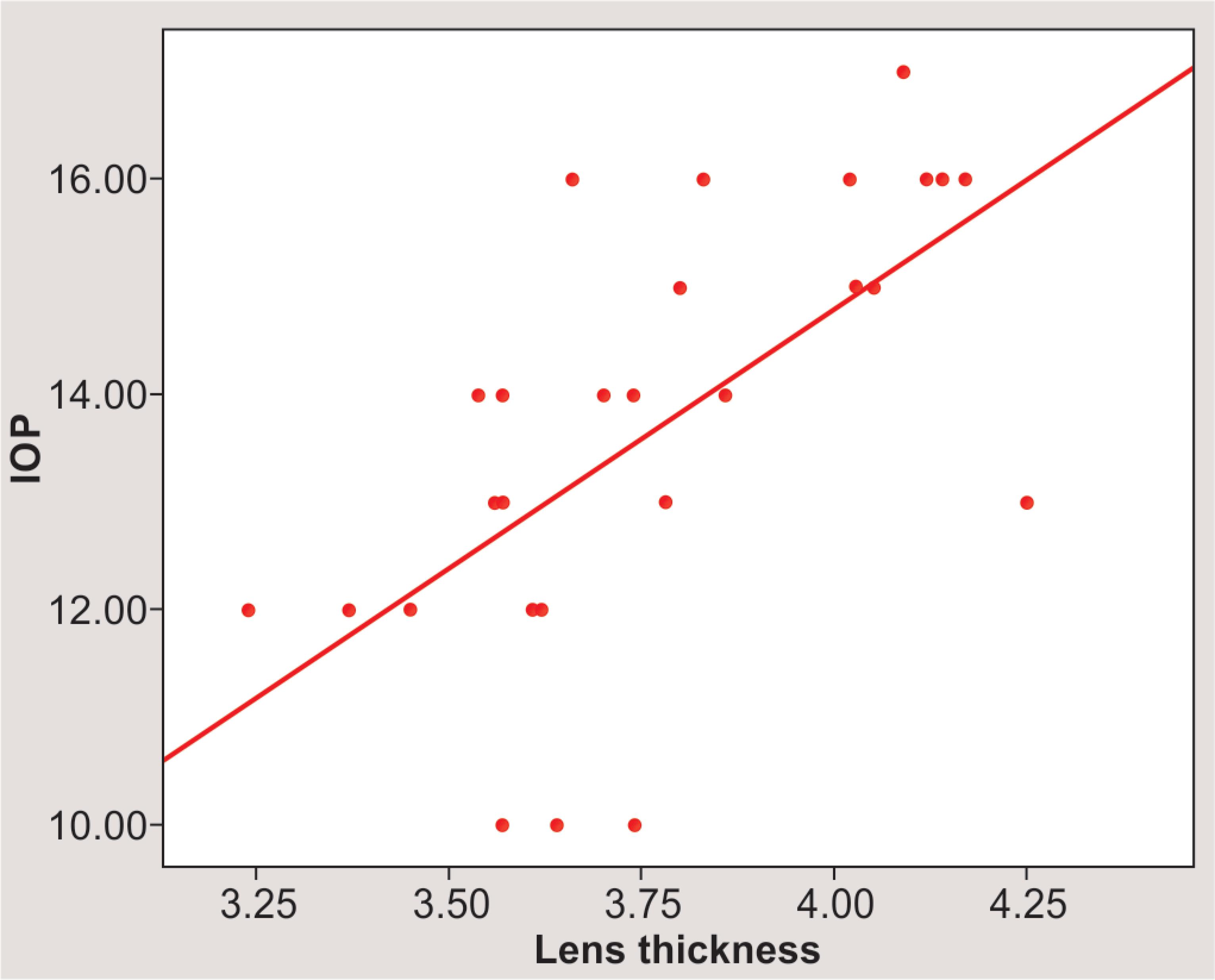 Fig. 3: A positive correlation between intraocular pressure and lens thickness 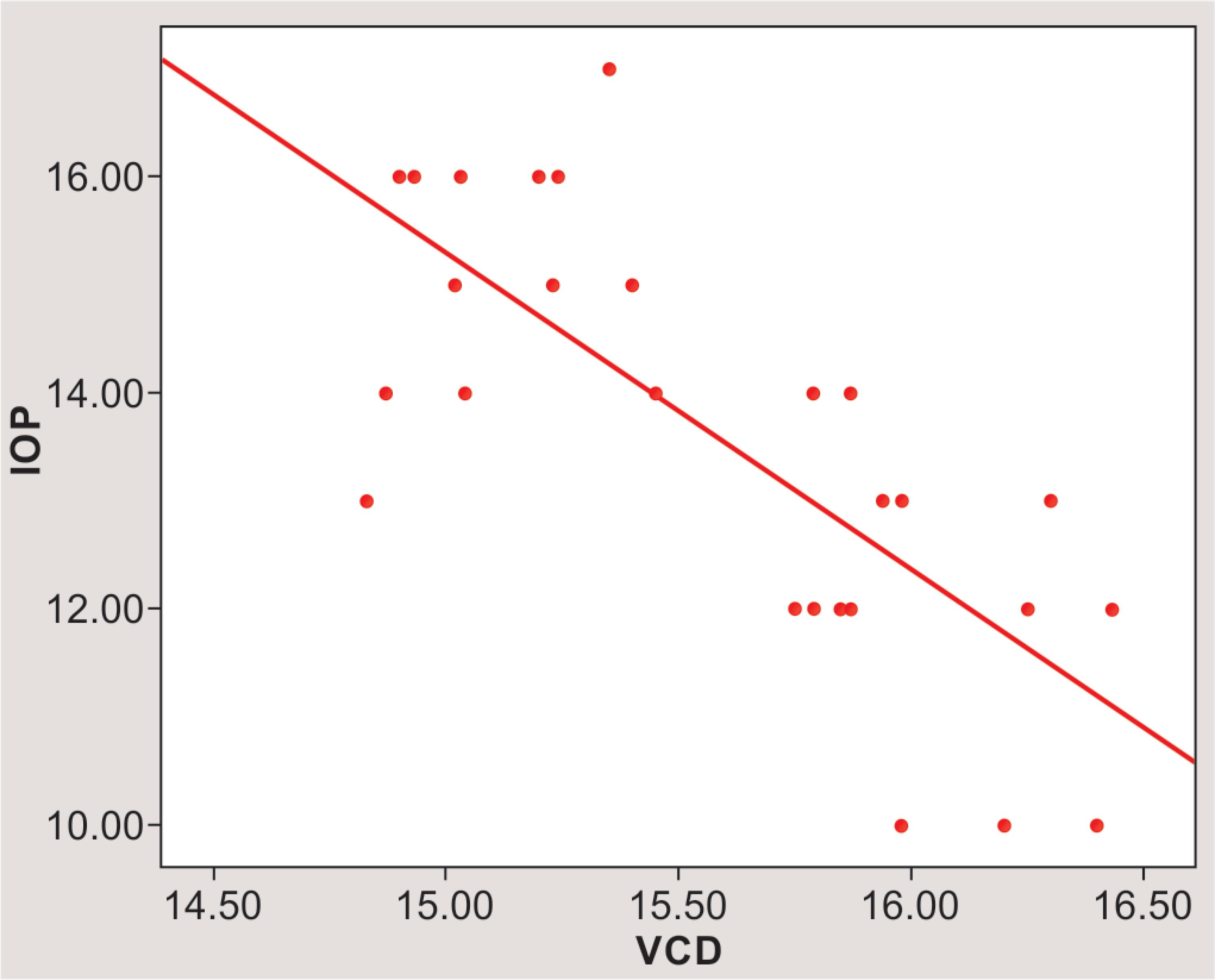 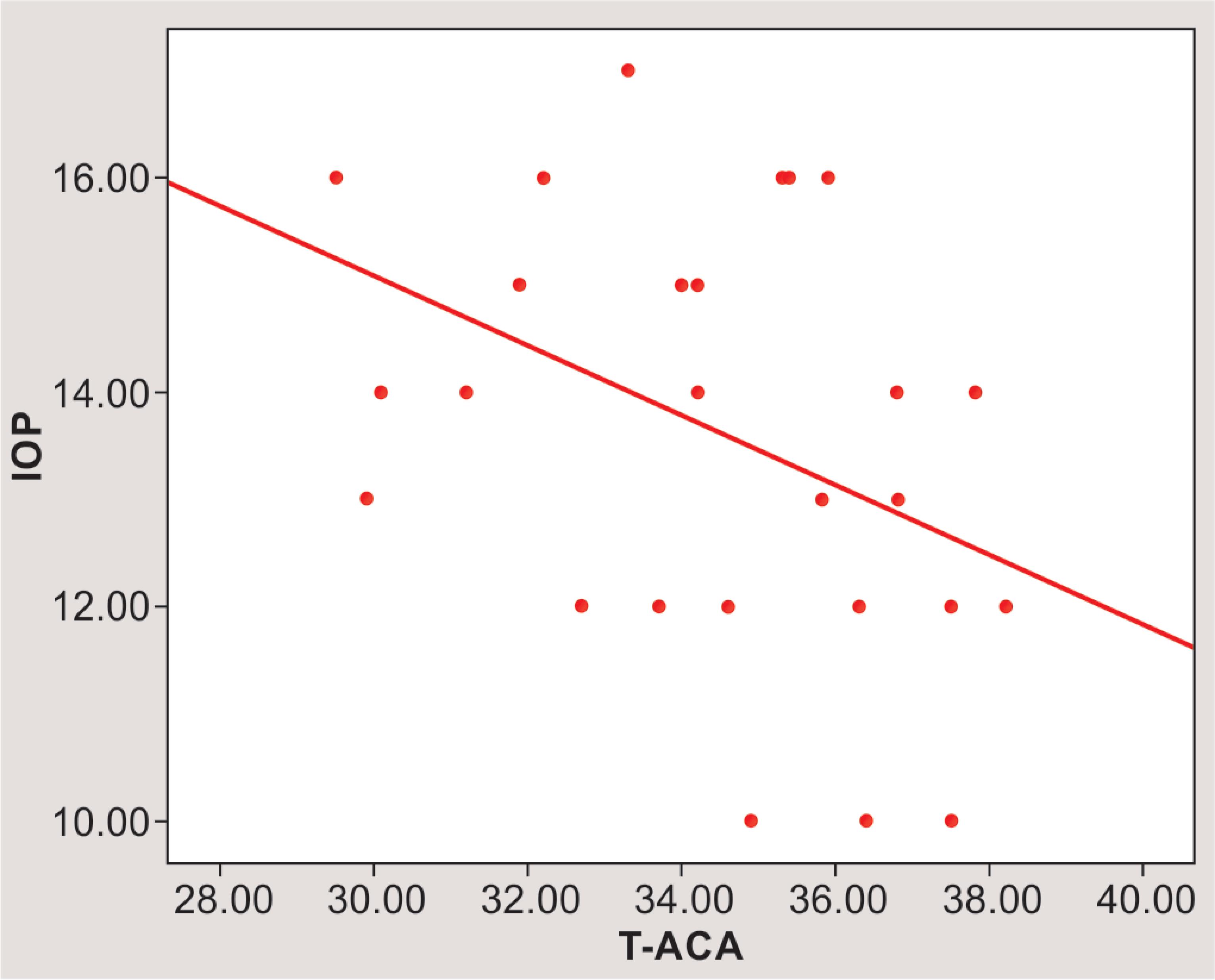 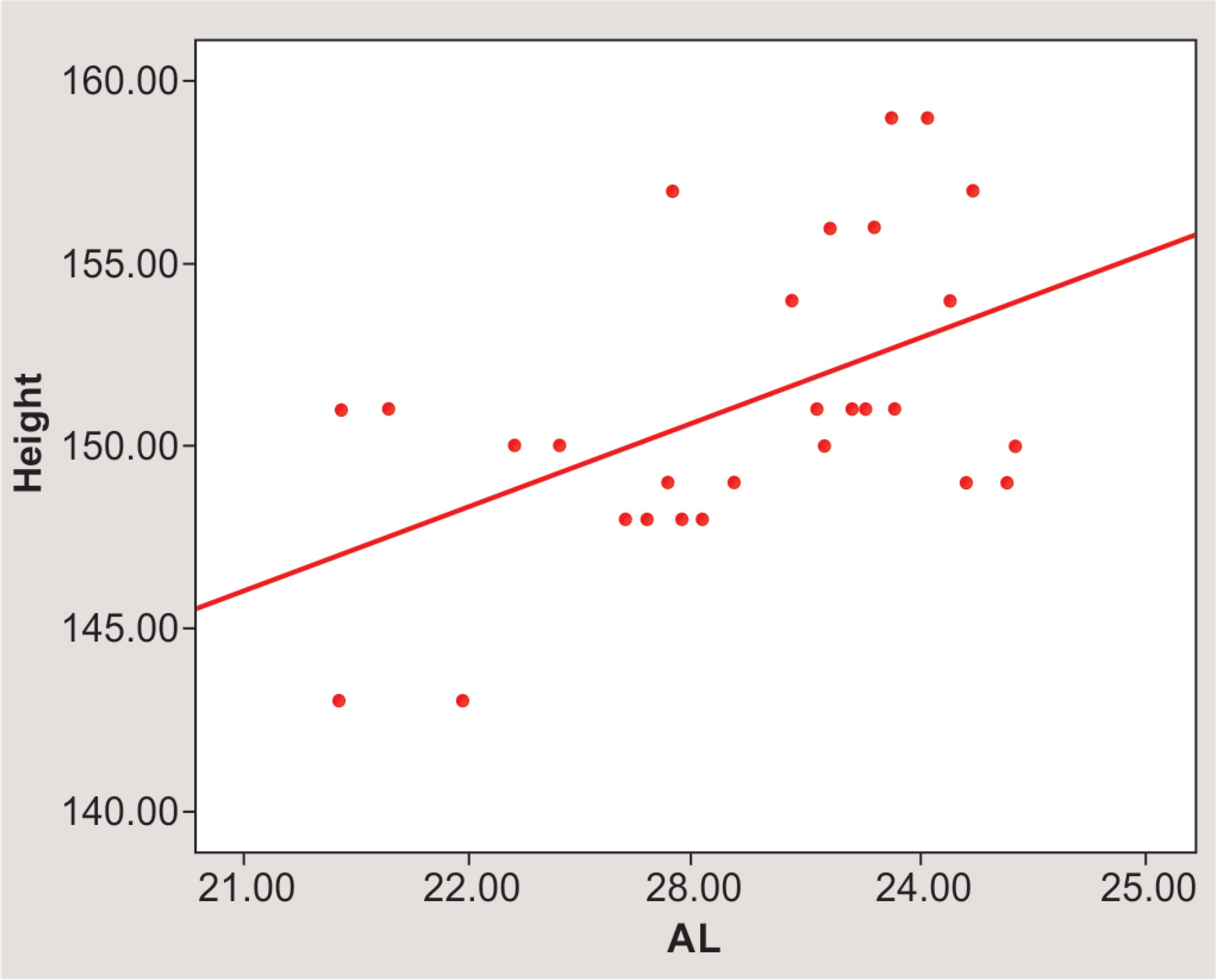 Fig. 6: A positive correlation between height and axial length 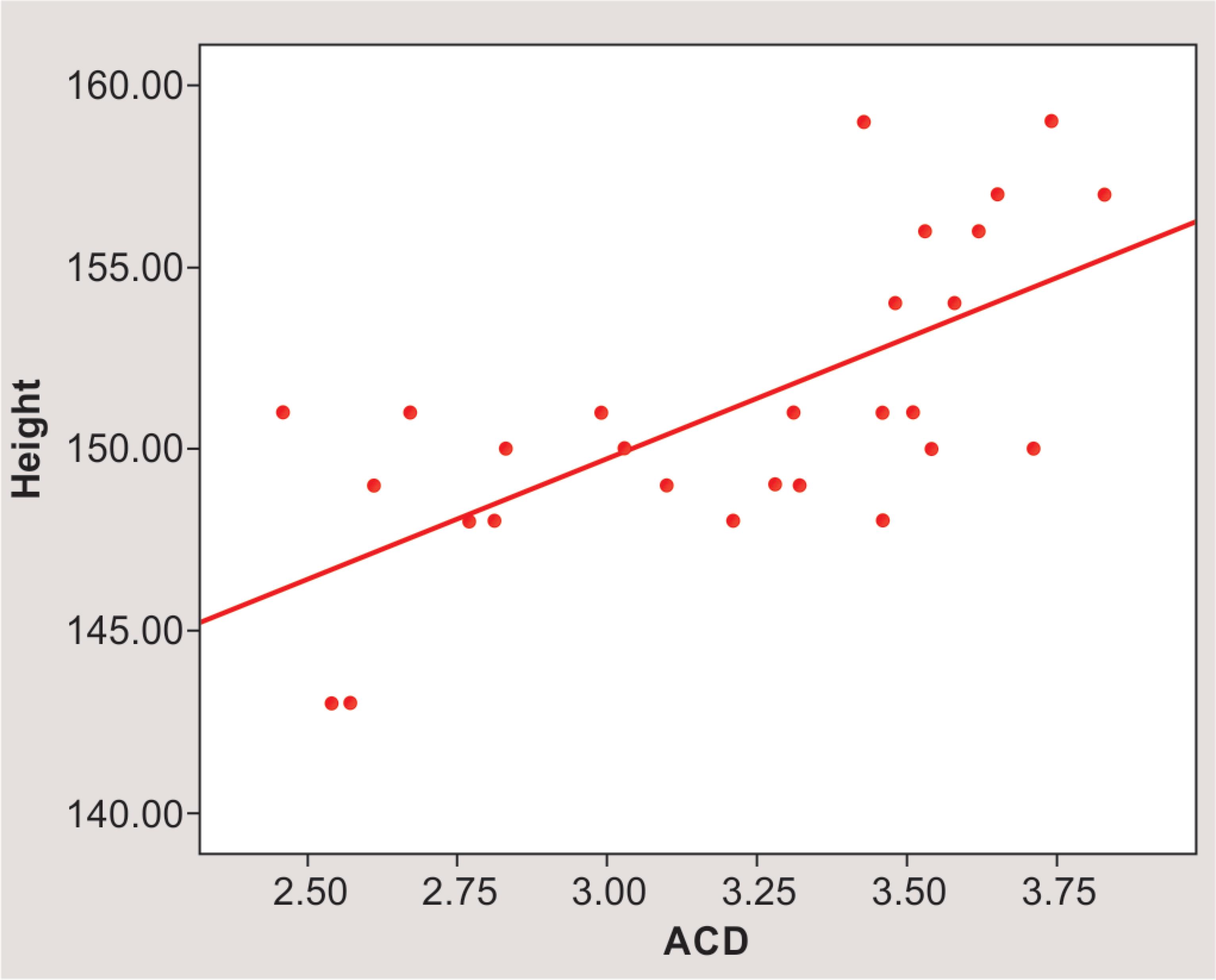 Fig. 7: A positive correlation between height and anterior chamber depth 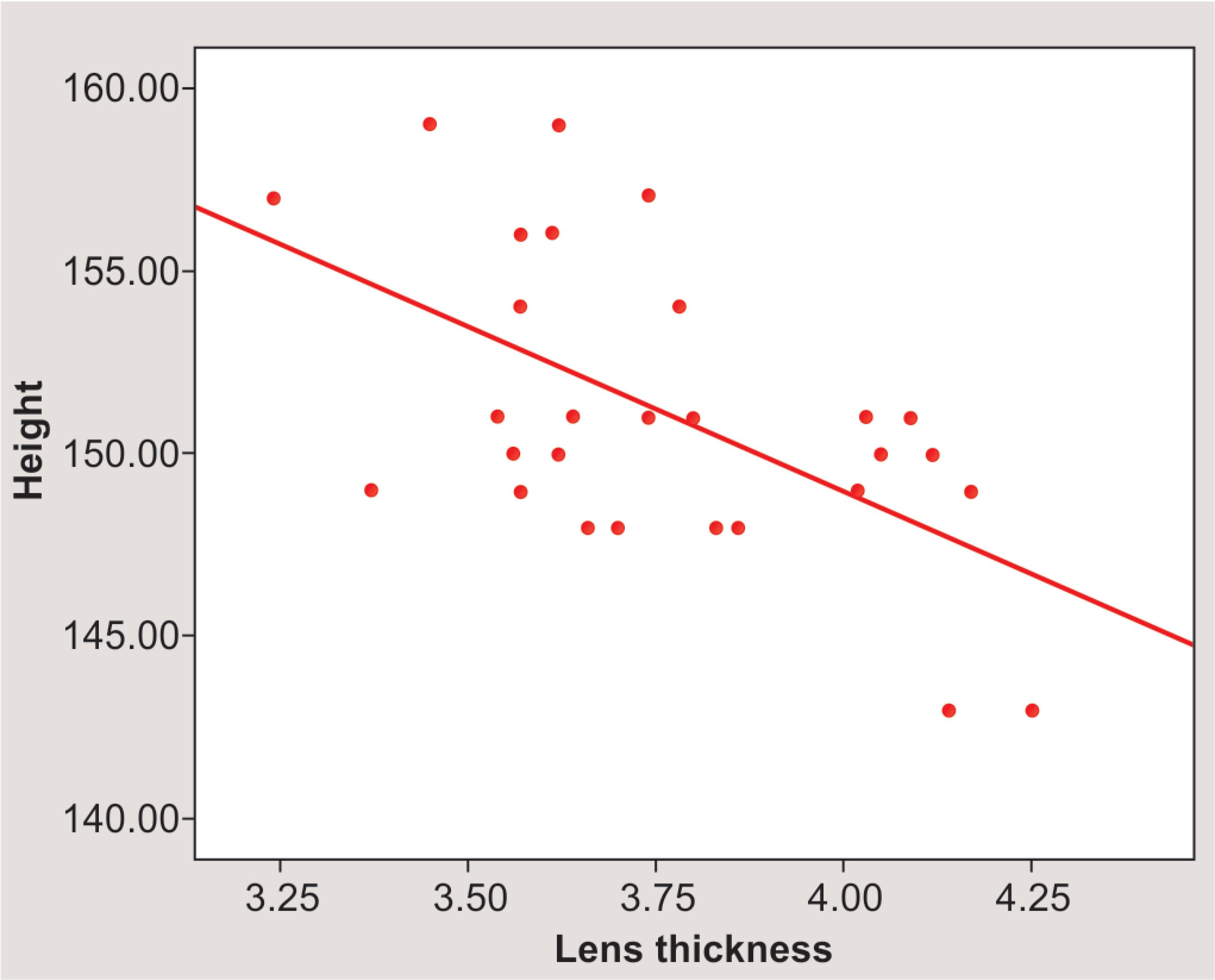 Fig. 8: A negative correlation between height and lens thickness 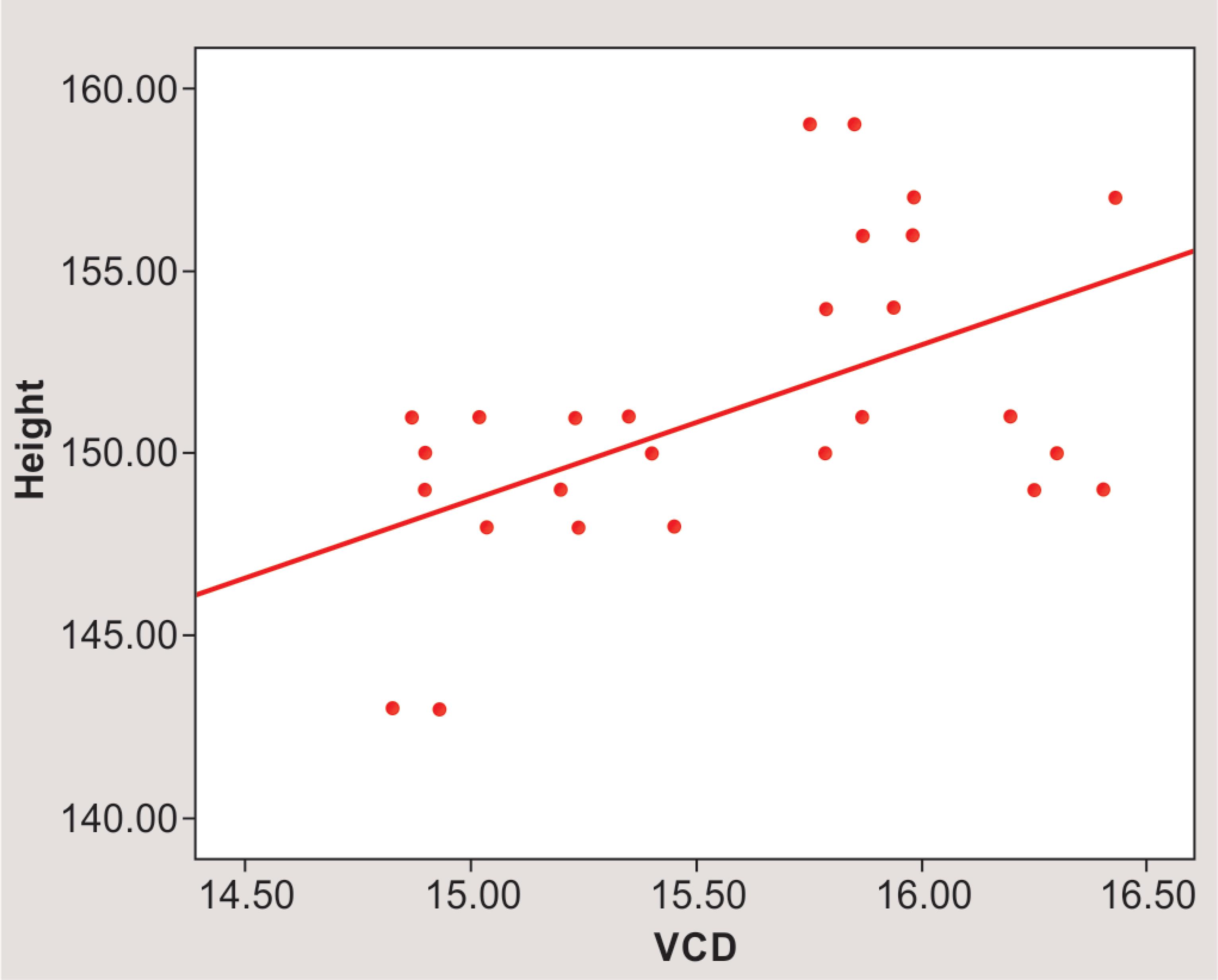 Fig. 9: A positive correlation between height and vitreous chamber depth 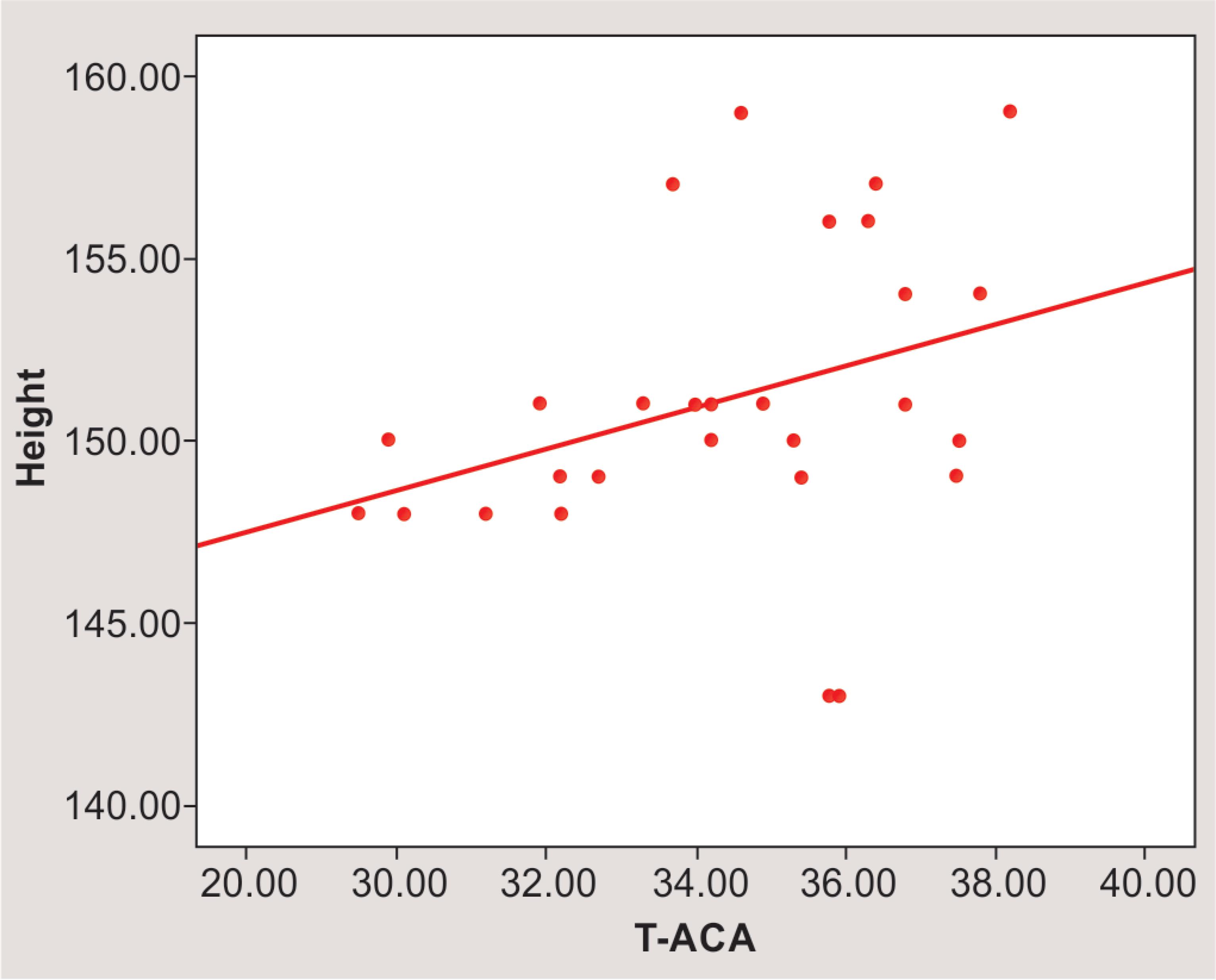 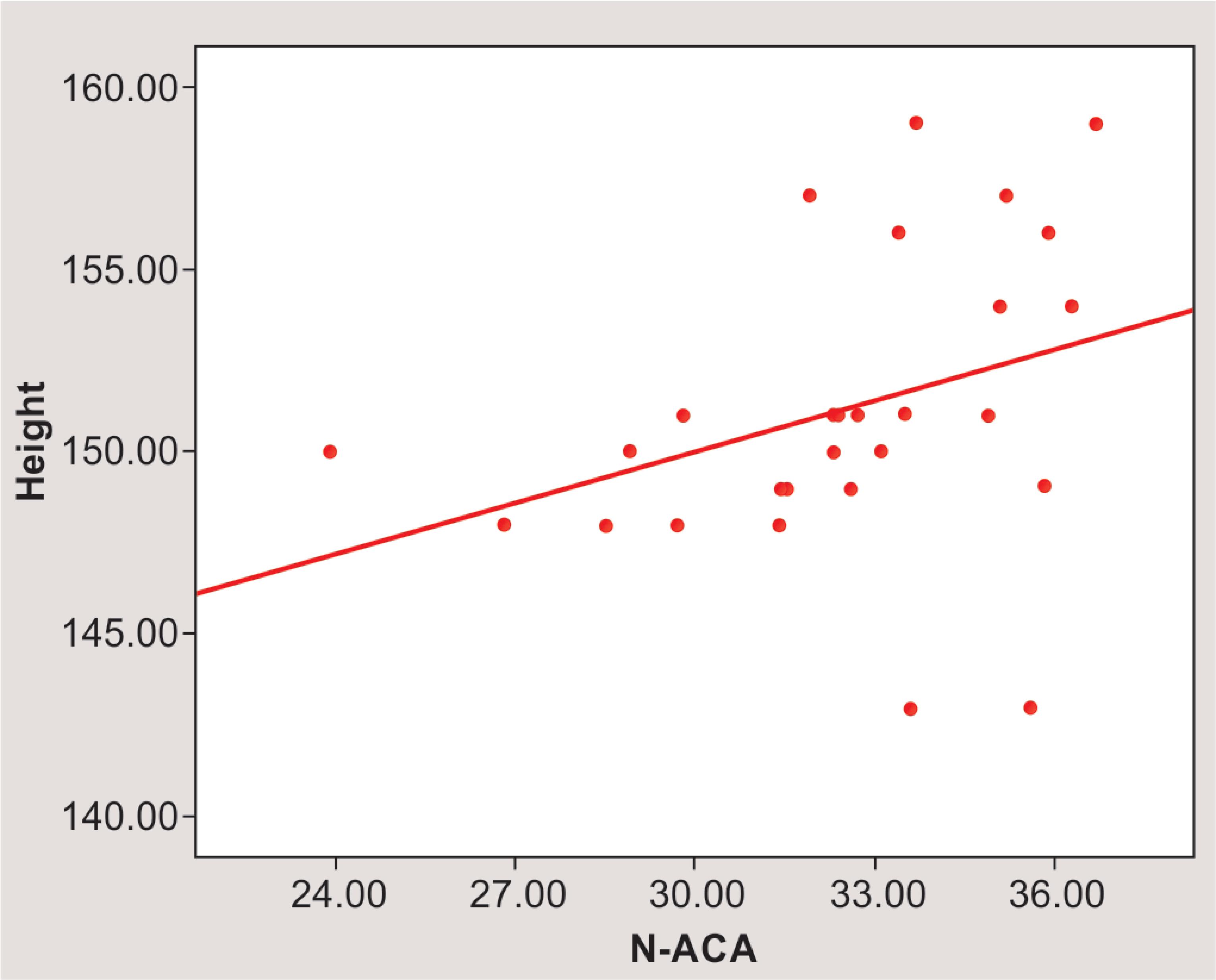 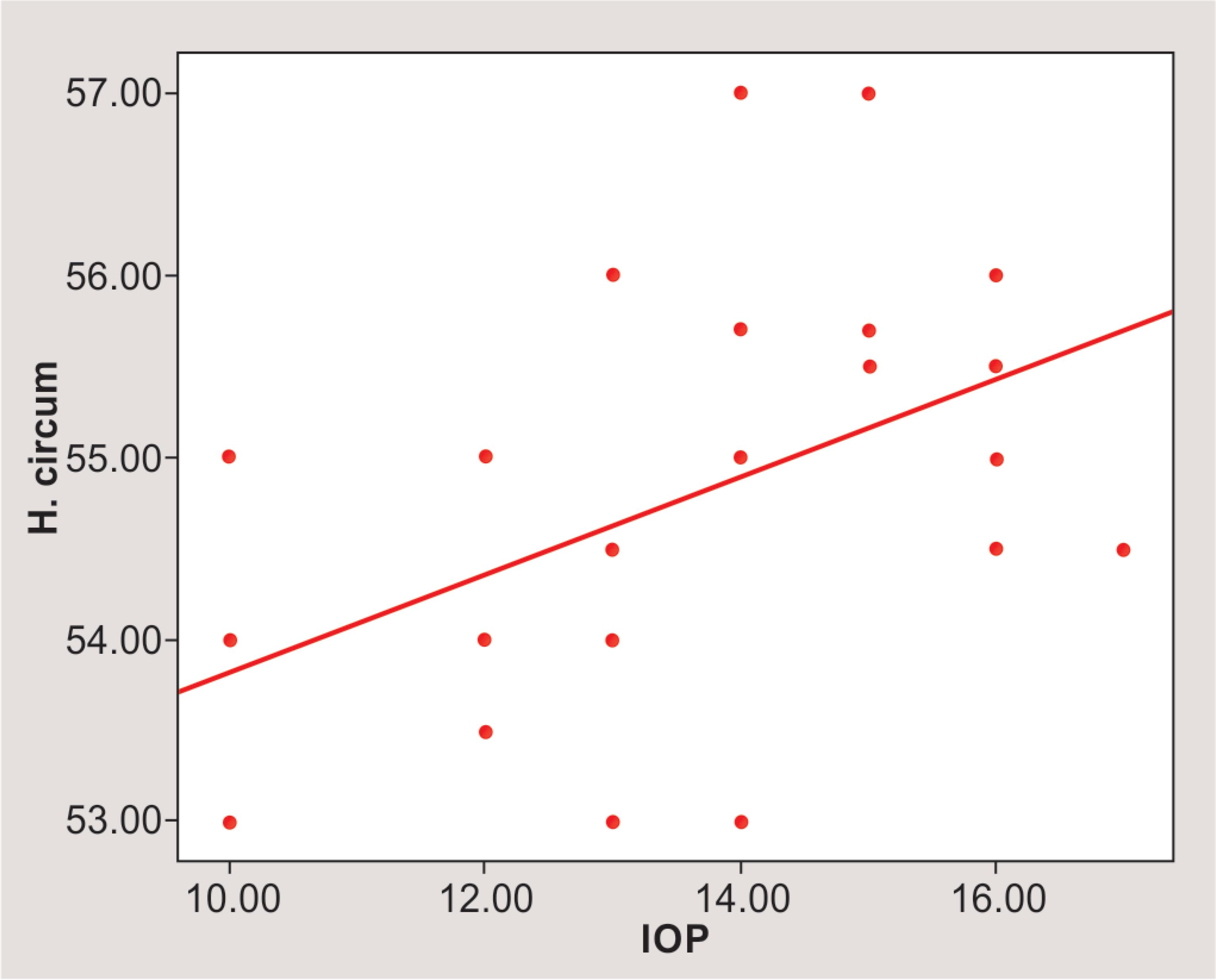 Fig. 12: A positive correlation between the head circumference and intraocular pressure 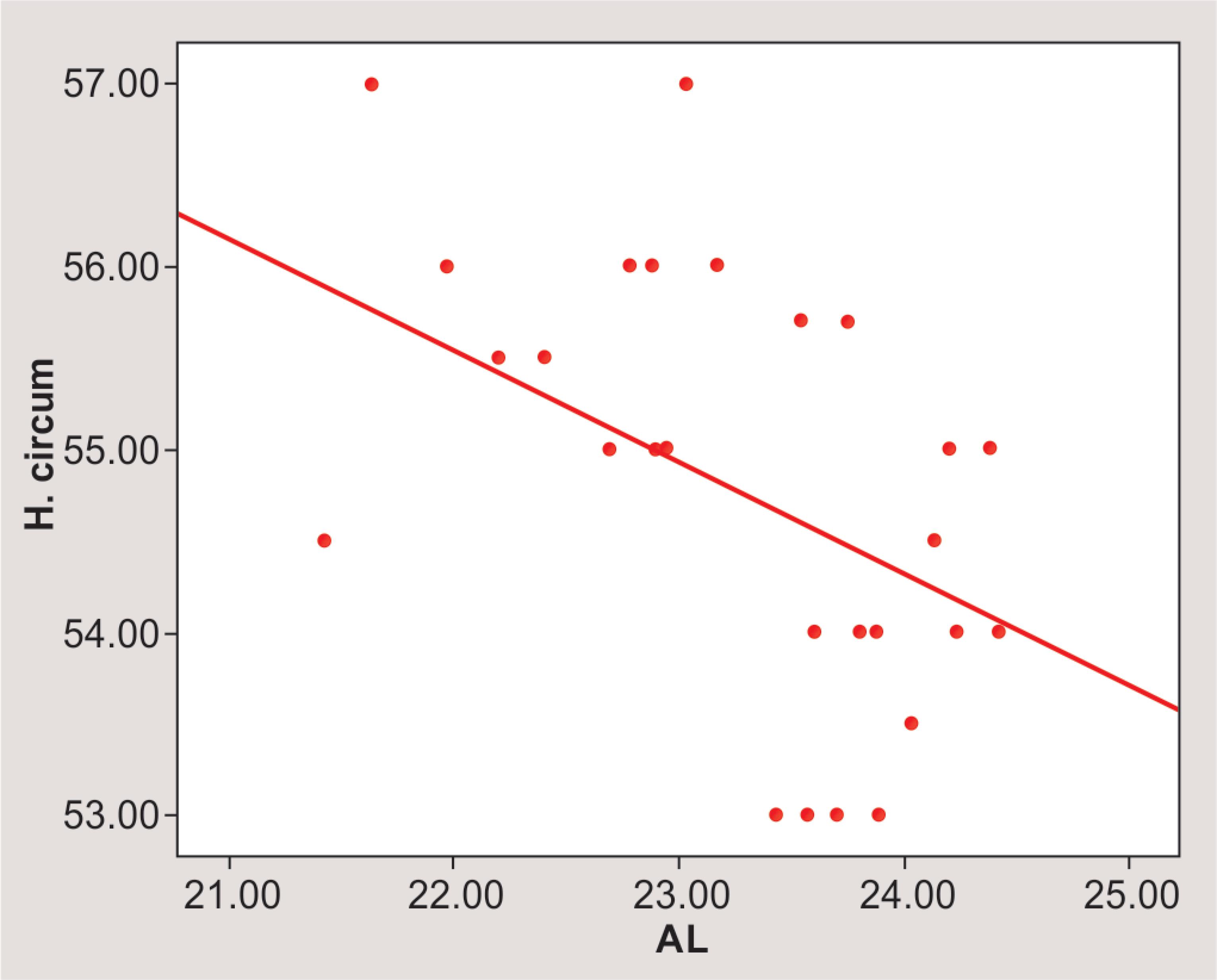 Fig. 13: A negative correlation between the head circumference and axial length 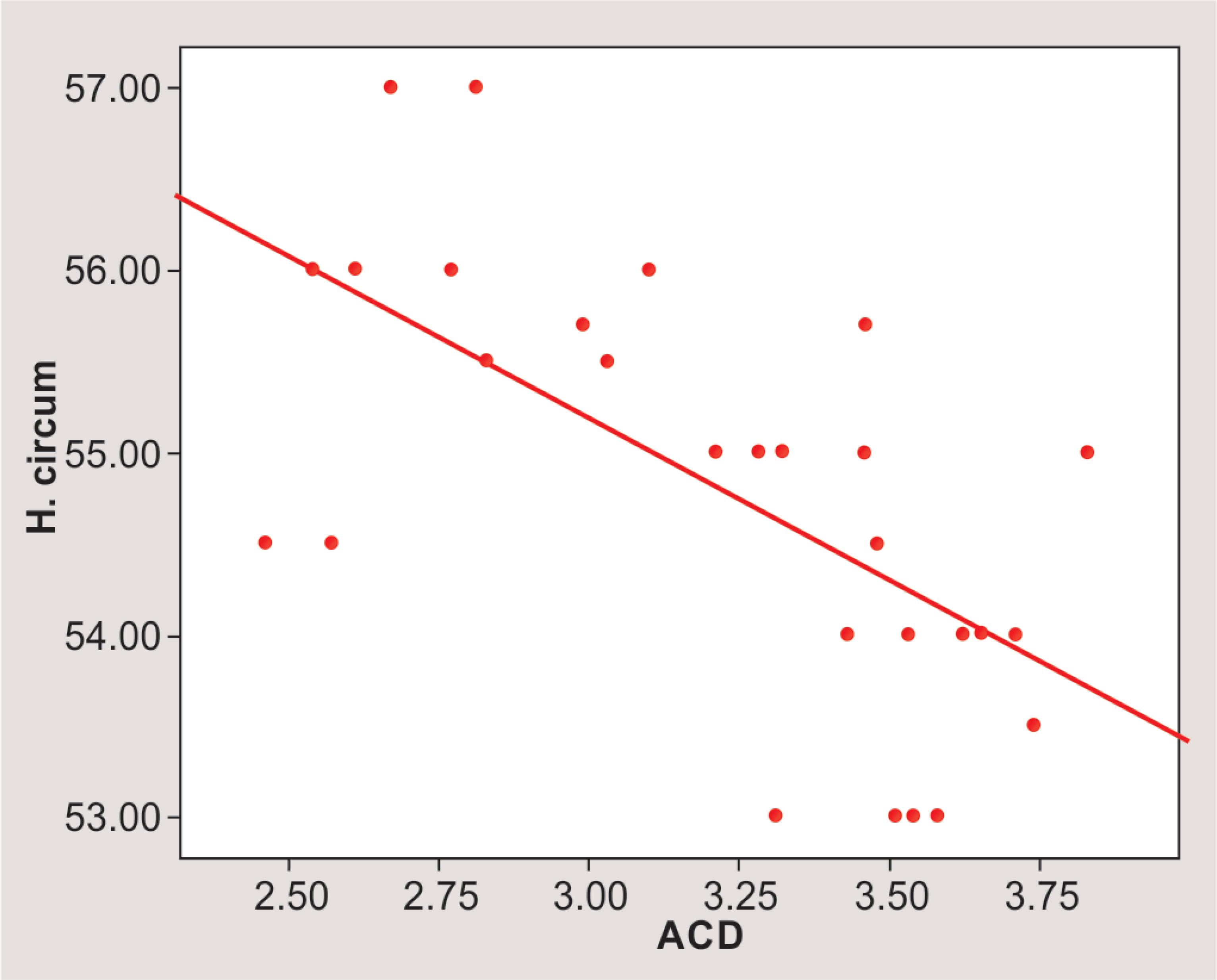 Fig. 14: A negative correlation between the head circumference and anterior chamber depth 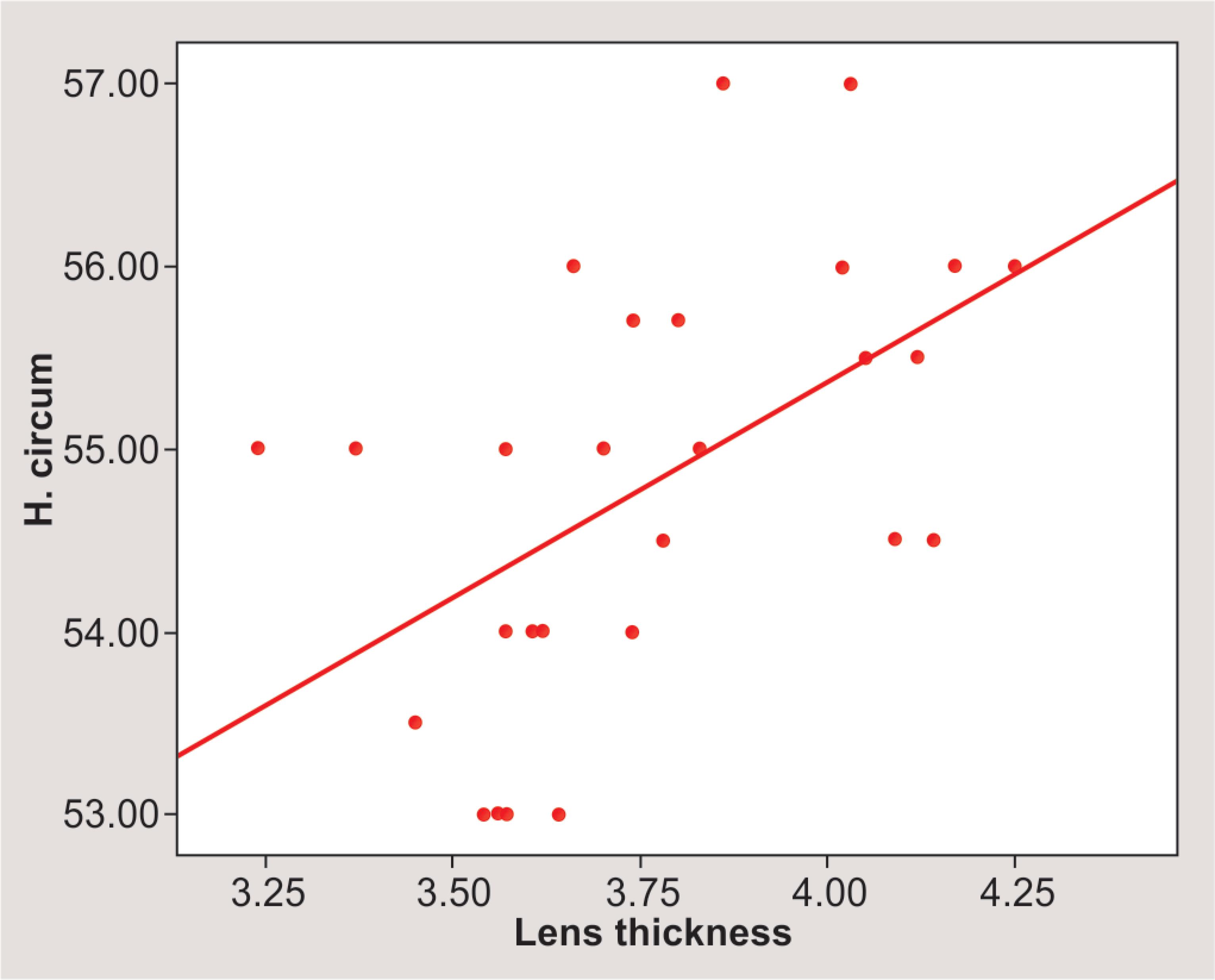 Fig. 15: A positive correlation between the head circumference and lens thickness 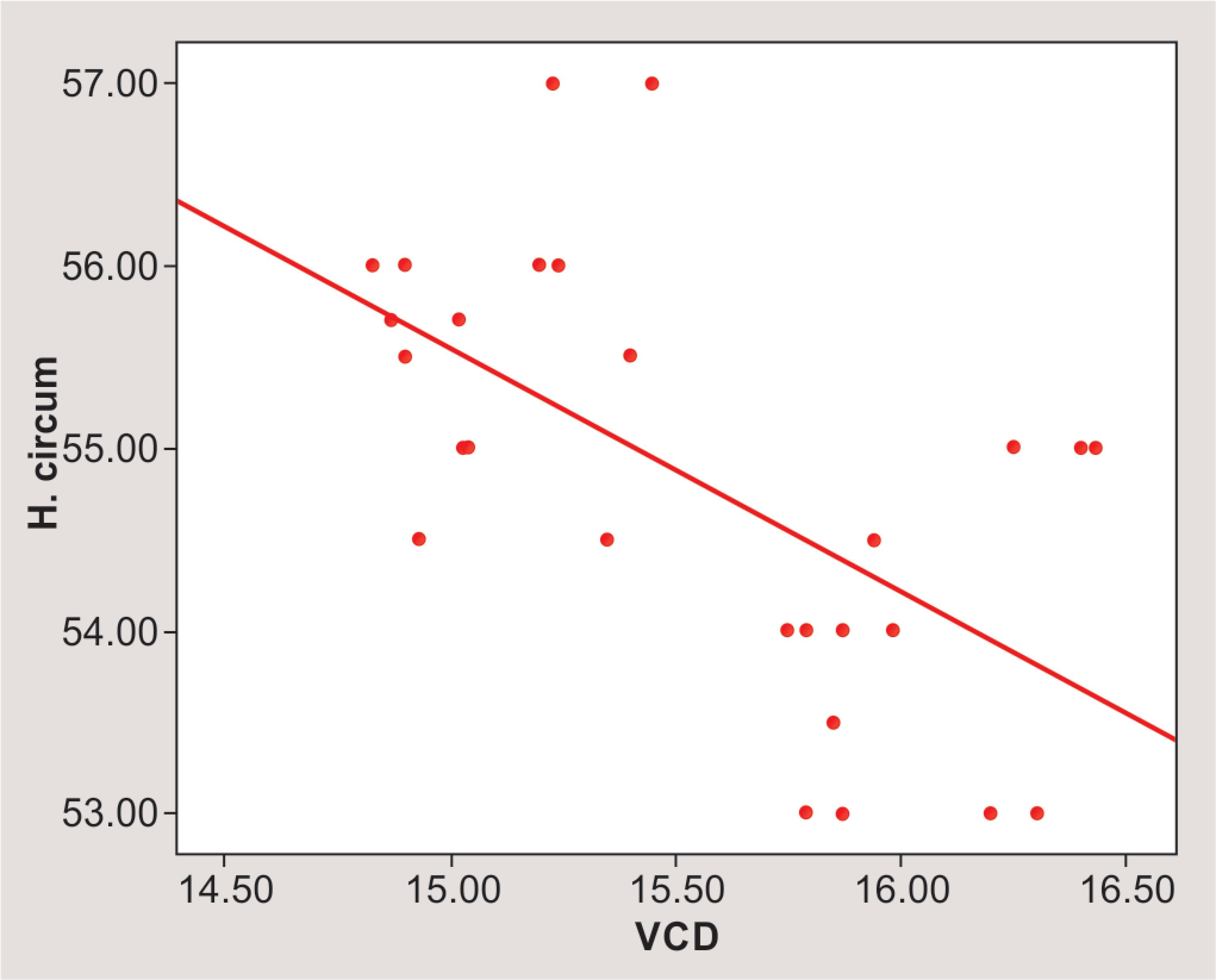 Fig. 16: A negative correlation between the head circumference and vitreous chamber depth 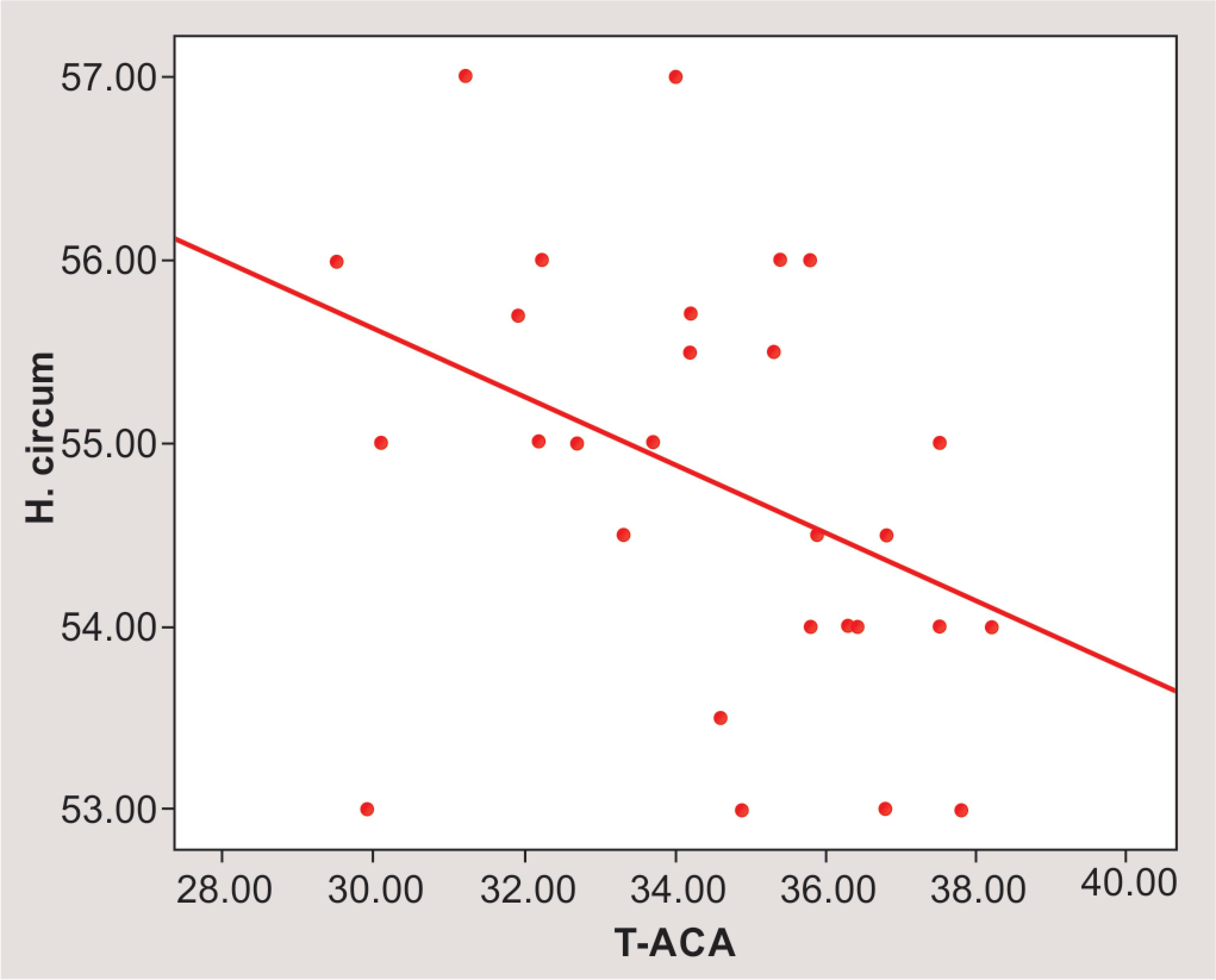 Fig. 17: A negative correlation between the head circumference and temporal anterior chamber angle

Also, there was steeper corneal curvature in thalassemia group with p value of 0.023 and 0.015 (for K1 and K2, respectively). No significant change was observed in corneal thickness in both groups with p value of 0.810 (Table 3).

Thalassemia major is a hereditary disease that affects those living in the Mediterranean area, including Egypt, especially with a high incidence of the consanguineous marriages. The disease needs long-lasting follow-up and treatment. It creates an economic and social problem. Many factors affect the life span and the systemic symptoms such as the patient’s socioeconomic and environmental situation. The progression of the disease in patients with thalassemia major, frequent blood transfusions, and the usage of chelating agents could affect the systemic symptoms.5 So, it is important to study the effect of thalassemia in different countries.

In this study, ACA was reported to be narrower in thalassemia patients, T-ACA was statistically significant, but N-ACA was statistically nonsignificant. There were no references to other studies to compare these results with others. This narrowing in T-ACA may be due to the increased length thickness that bush iris anteriorly, leading to T-ACA narrowing in the same mechanism of narrowing the angle with age. The affection of temporal angle with sparing of nasal angle is not well understood. But this finding has been found by Chen et al.6 who reported that the temporal angle is the angle that narrows with age.

The corneal thickness in both groups was not statistically different. So the increased IOP in thalassemia patients reported in this study and in other studies was not due to the difference in pachymetery. But it may be due to steeper corneal curvature as explained by Nowroozzadeh et al.7 However, the increased IOP in thalassemia patients may be due to the short AL, ACD, and VCD and due to the thick lens as supported by the negative correlation between the IOP and AL, ACD, and VCD found in this study (Figs 1 and 2). Also, the positive correlation between the LT and IOP reinforces this hypothesis. The narrower T-ACA may play a role in the increased IOP because a negative correlation between IOP and T-ACA was found in this study (Fig. 5).

Thalassemia major affects the biometric parameters of the globe. In this study, the AL, ACD, and VCD decreased in thalassemia patients. This matches with Khalaj et al.,8 Nowroozzadeh et al.,7 Heydarian et al.,9 and Elkitkat et al.10 All reported shorter AL and ACD of thalassemia patients. This can be due to the skeletal abnormality affecting the bony orbit as a result of the bone marrow expansion. Pereira and Allemann11 found a correlation between AL, ACD, VCD and the height in normal population. As thalassemia patients have shorter height, they have shorter AL, ACD, and VCD as a part of generalized growth retardation. This hypothesis was supported by the positive correlation between the AL, ACD, VCD, and the height found in my study (Figs 6 to 9).

This study demonstrated an increase in LT in thalassemia patients as reported in some studies.7–10 The cause of this is not well understood. It might be due to precipitation of iron in lens matter. Despite the lens was thicker in thalassemia patients compared to the control, the relative lens position did not show statistical difference in both groups. This is because the increased LT is compensated by the short AL and ACD.

The thalassemia patients had steeper corneal curvature than the control group, which has been reported by Nowroozzadeh et al.,7 Heydarian et al.,9 and Elkitkat et al.10 The cause of this steep cornea has not been understood yet, but the change in a bony orbit may be the cause or it may be a compensatory mechanism for short AL.

The steeper corneal curvature and the increased LT compensate shorter AL. So no statistical difference in BCVA.

Thalassemia affects ACA, IOP, and the biometric globe parameters. Narrower T-ACA and increased IOP were found in thalassemia patients. Shorter AL, VCD, and ACD were reported. Also, steeper corneal curvature and thicker lens were found. The CCT and the relative lens position were the same in both thalassemia patients and control groups.