Conclusion: The reduced SC parameters in the eyes with unilateral 360° ARG and the normal fellow eyes could mean that these patients probably have an underlying structural abnormality in the SC. Trabecular meshwork injury, angle recession, and increased trabecular pigmentation are probably the predisposing factors in the ARG eyes for the increase in IOP. Whether the normal fellow eyes develop IOP rise in the future needs to be seen during regular follow-up.

Anterior chamber iridocorneal angle recession is a known complication after an ocular-closed globe injury. It is a radial tear between the longitudinal and circular muscle fibers at the anterior face of ciliary body and seen on gonioscopy as a characteristic marked deepening and widening of ciliary body band and often bare sclera.

It has been reported that a 601 to 77%2 of these eyes will develop some degree of angle recession after ocular concussion injury and up to 63 to 7%4 of the eyes may develop angle recession glaucoma (ARG), which is classified under secondary open-angle glaucoma (OAG). There appears to be two peak incidences of ARG, with the first peak occurring within the first few weeks to years and the second peak in %3E;10 years, after the initial injury.4,5 Late development of glaucoma has been reported to be more frequent in the eyes with angle recession of >180°.4–6

After closed globe injury, the mechanism for early intraocular pressure (IOP) elevation is postulated to be due to inflammation, hyphema, trabecular meshwork (TM) injury and impairment of the Schlemm’s canal (SC) function, which may last for days or weeks. Chronic IOP elevation can occur in the later years, which could be due to the hyaline membrane over TM, scarring and fibrosis of the TM, and SC that may decrease the aqueous outflow especially in an individual with a predisposition for primary OAG, causing ARG.4,7–11

Recent studies have provided reproducible measurements of the SC cross-sectional area (SC-CSA) with anterior segment optical coherence tomography (AS-OCT).12–15 The purpose of our study was to quantitatively evaluate the SC parameters by AS-OCT in the eyes with unilateral 360° ARG and compare it with the SC parameters of the normal fellow eyes and age-matched normal controls.

In our prospective study, 14 patients with unilateral 360° ARG, who were referred to glaucoma clinic for gonioscopy after blunt trauma or for the management of raised IOP between August 2017 and April 2018, and 34 age-related normal controls were enrolled. The study was conducted in accordance with the tenets of the Declaration of Helsinki, and a written informed consent was obtained from all the study participants.

A detailed medical history, past history of blunt ocular trauma (mode of injury, time from trauma to the first visit, previously sought ophthalmic consultation, and treatment), and family history of glaucoma were obtained. Patients with iridodialysis, subluxated lens, history of surgery for traumatic cataract, vitreo-retinal surgery for posttraumatic vitreous hemorrhage, and retinal detachment were excluded.

On gonioscopy, 360° recessed angle was identified as an angle with a regular deepening and widening of the ciliary body band, and the area of recession was carefully compared with areas of normal angle in the nontraumatized fellow eye. Other signs included irregular and increased angle pigmentation, broken iris processes, and widened and prominent scleral spur.

Study participants underwent imaging of SC with RTVue (Optovue, Fremont, CA) AS-OCT corneal line scan, which has 8 mm scan length. The scan line was placed on the limbus at temporal and nasal, 3 and 9 o’clock meridians. SC was identified in the cross section scan as a horizontal elliptical or oval-shaped translucent space, close to the TM (Fig. 1). All the scans were obtained by a single experienced examiner. Scans with excessive shadowing or high signal–noise ratio were discarded, and only the scans with good image quality and signal strength %3E;50 were selected for the analysis.

An examiner, who was masked to the clinical diagnosis, exported the AS-OCT images, using OCT files, and the ImageJ2 tool (https://imagej.nih.gov/ij/plugins/raw-file-opener.html) was used to compute the measurements. With the free hand option in the ImageJ2 tool, SC-CSA was manually marked and measured by fitting the optimal ellipse. Measurement of SC meridional and coronal diameters was also taken.

SPSS software version 16 (SPSS, Inc., Chicago, IL, USA) was used for the statistical analysis. A descriptive analysis was reported as mean ± standard deviation. Levene’s test was used for equality of variances. Independent sample t test was used for comparison between the groups. Statistical significance was considered when the p value was <0.05.

Out of the 14 patients who were diagnosed to have unilateral 360° ARG after the blunt injury, 6 patients fulfilled inclusion criteria and were included for the analysis. All the patients had no history of blunt trauma in the fellow eye. Out of the eight eyes who were excluded, one eye had Ahmed glaucoma valve surgery for traumatic glaucoma, two eyes had subluxated lens, one patient had unilateral pseudophakia (operated for traumatic cataract), and four eyes had prior vitreo-retinal surgery (two for traumatic vitreous hemorrhage and two for the retinal detachment).

Out of the six patients, two patients (cases 3 and 6) had forgotten about the ocular injury and gave distant history of eye trauma. They recalled that they had sought ophthalmic consultation at the time of the injury but could not produce the reports of prior examination. Table 1 summarizes the clinical characteristic of the six patients with unilateral 360° ARG.

There was no significant difference in the mean age, gender, laterality of the eyes, and CCT between the ARG eyes and the normal controls (Table 2). Mean duration from the time to injury to the initial presentation, when the diagnosis was made, was 130.6 ± 210.8 days (range, 1 month–43 years). Mean IOP at presentation, visual field mean deviation (MD), and visual field pattern standard deviation (PSD) were higher in the ARG eyes, when compared with the fellow eye and age-matched control. All the ARG eyes showed 360°, dense grades III to IV homogeneous pigmentation in the angle and early to moderate glaucoma, at the time of diagnosis (Table 2). There was no significant difference in the IOP, CCT, MD, and PSD (all p %3C; 0.05) between the age-matched controls and the fellow eyes of ARG patients.

In our study, we found that the six eyes with 360° angle recession had reduced SC dimensions, compared with the age-matched normal controls. Interestingly, the fellow eye SC dimensions were also reduced when compared with the normal healthy subjects, and there was no significant difference in the measured SC parameters between the ARG eyes and the normal fellow eyes. Previous studies with the AS-OCT have demonstrated a reduced SC area and diameter in the primary open angle glaucoma (POAG) eyes, when compared with the normal control.13,14 Hong et al.14 and a study by our group15 have demonstrated that there is no significant difference between the temporal and nasal section parameters as measured with AS-OCT.

Fig. 1: Cross-sectional image of Schlemm’s canal in the temporal quadrant obtained with anterior segment optical coherence tomography in the right eye of a normal subject

In a study of 40 eyes with traumatic glaucoma after closed globe injury, Sihota et al.6 found that the factors which were predictors of glaucoma were increased baseline IOP, hyphema, increased TM pigmentation, angle recession of %3E;180°, and lens displacement. The increased IOP at the baseline in these eyes could be due to decreased aqueous outflow because of inflammation, extensive pigment deposition, and damage of TM. Another proposed mechanism for the raised IOP in ARG eyes is the loss of ciliary muscle tension on the scleral spur resulting in SC narrowing, as the angle recession can disrupt the ciliary muscle tension on the TM and SC, which can compromise aqueous outflow.1 Histopathological studies have reported atrophy, degeneration, fibrosis, and scarring of the TM and SC. Wolff and Zimmerman9 suggested that the initial trauma to the TM stimulated proliferation and degenerative changes in the TM and obliteration of the inter trabecular spaces and SC, and inner circular muscles atrophy of the ciliary body can also occur. This can cause reduction in aqueous outflow facility, and IOP can increase with the time as with the advancing age, the outflow facility decreases. Electron microscopy has shown the hyaline membrane over the inner TM and an endothelial layer, which is structurally similar to the normal corneal endothelium.11

a p value between the normal and angle recession eyes

b p value between the angle recession and fellow eyes

c p value between the normal and fellow eyes 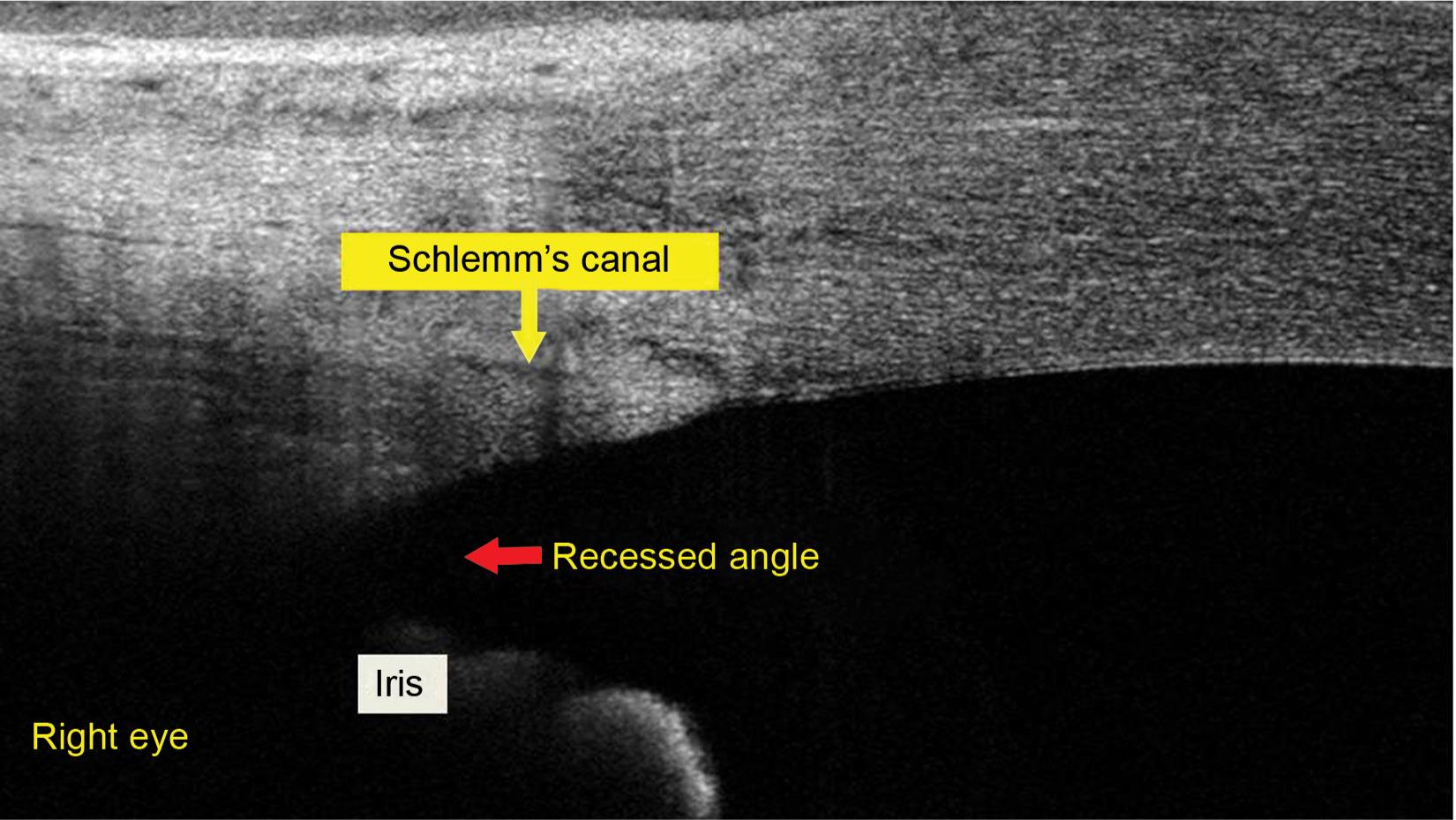 Fig. 2: Cross-sectional image of the recessed angle in the temporal quadrant, showing narrowed Schlemm’s canal and posterior displacement of iris root in the right eye of a patient with angle recession glaucoma

A study reported that the 50% of ARG eyes will develop OAG in the contralateral fellow eye, over a mean of 7.7 years of follow-up.16 In their study, the “normal” fellow eye of patients with unilateral ARG had early glaucoma, ocular hypertension, or “high normal” IOP. It is reported that the normal fellow eyes of unilateral ARG patients are likely to have an increased IOP and a positive response to corticosteroid provocative test.17 This supports the hypothesis that the angle recession per se does not cause increase in the IOP in ARG eyes, but the TM injury and subsequent scarring secondary to the blunt ocular trauma, along with a predisposition for the development of primary OAG, causes ARG, with the passage of time.9 It was thought that the ARG eyes could have a genetic predisposition to a gradual, chronic decrease in the trabecular function in both the eyes.18

We speculate that the ARG patients have an underlying structural abnormality of SC in both the eyes, and the ocular blunt trauma initiated a cascade of events leading to glaucoma in the ARG eyes. Due to the extensive injury in the eyes with 360° angle recession, loss of ciliary muscle support to the scleral spur, dense TM pigmentation, and TM injury, all could have contributed to the increase in IOP in the ARG eyes. Kagemann et al.19 have reported that the elevated IOP causes SC compression, which could explain the trend of lower SC-CSA and SC diameters in the ARG eyes, compared with the normal fellow eyes, though the difference between the two groups did not reach statistical significance. Whether the fellow eyes will develop IOP rise in the future needs to be seen. It would also be interesting to see the changes in the SC morphology in the eyes with angle recession without increased IOP.

Limitations of the study were small sample size of ARG patients. Second, two SC scans in two quadrants may not be representative of overall SC measurements. However, it was technically not possible to obtain scans over 360° for the SC.

Despite the limitations, the observed results are of interest and were consistently observed in all the patients. Careful monitoring of IOP, gonioscopy, and optic disk evaluation is recommended for all the patients after ocular blunt trauma. Clinicians must educate the patients and make them understand the lifetime risk of developing glaucoma. Also, a regular, annual follow-up examination is recommended for an indefinite follow-up period to detect late onset of glaucoma.