Purpose: To report a case and management of persistent hypotony with hypotony-induced maculopathy after CyPass® device implant.

Background: The CyPass® was the first supraciliary ab interno device approved by FDA and commercially available. Efficacy studies showed adequate intraocular pressure (IOP)-lowering results in combination with phacoemulsification. Hypotony induced by suprachoroidal minimally invasive glaucoma surgery (MIGS) was reported to be lower than 3% in the population that comprised the COMPASS study.

Case description: A 57-year-old female patient with mild open-angle glaucoma with maximum topical medical therapy who underwent sequential bilateral CyPass® implantation developed persistent hypotony. Device obstruction was induced through argon laser burns directed to the peripheral iris, and the device was no longer visible on follow-up examinations. Topical IOP-lowering medication was restarted (timolol–dorzolamide) and has since been controlled under 16 mm Hg, without progression on visual fields.

Clinical significance: Here, authors show a novel approach for treatment of persistent hypotony secondary to CyPass® implantation. In the knowledge of the authors, this is the first report that describes a noninvasive management for this complication, and this case could help other physicians to manage similar cases.

Minimally invasive glaucoma surgery (MIGS) includes devices and procedures aimed to reduce intraocular pressure (IOP) with a quick recovery and minimal eye trauma in patients with early glaucoma.1 Such procedures are directed to one of the three mechanisms: reducing resistance at the trabecular meshwork and Schlemm’s canal,2 accessing the subconjunctival space through an ab interno approach,3 or communicating the anterior chamber to the suprachoroidal space.4

Cyclodialysis has been long used in the management of glaucoma and was recently repurposed through the implantation of specially designed devices with the purpose of opening a channel between the anterior chamber and the virtual space between the sclera and the choroid near the ciliary body in a controlled fashion. The CyPass® Micro-Stent (Alcon, Fort Worth, Texas) was the first supraciliary ab interno device to be approved by FDA and commercially available in the US and Mexico, and it showed adequate IOP-lowering results with low complication rates when performed in combination with phacoemulsification.4

In August 2018, the CyPass® device was withdrawn from the market by its manufacturer over concerns of accelerated endothelial loss found on the COMPASS-XT trial 5-year result cohort5 (Clinical-Trials.gov Identifier: NCT02700984). At the time of the withdrawal, thousands of devices had already been implanted, leaving patients and ophthalmologists without a clear guideline as to what to expect and how to conduct follow-up.

Hypotony induced by suprachoroidal MIGS was reported to be lower than 3% in the population that comprised the COMPASS study.6 Surgical intraluminal occlusion of the device has been reported to be successful to treat these patients without complications;7 we present a different, noninvasive approach to manage persistent hypotony following CyPass® implantation.

A 57-year-old female pseudophakic patient known for open-angle glaucoma treated with a fixed combination of timolol, brimonidine, and dorzolamide twice daily (BID) with best-corrected visual acuity (BCVA) of 20/40 on both eyes and IOPs of 26 mm Hg and 24 mm Hg after washout with moderate visual field defects underwent sequential successful CyPass® implantation nasally on both eyes.

The day after insertion on the right eye, IOP was 2 mm Hg with a slightly narrow anterior chamber but no choroidal detachment either clinically or by ultrasound. After 2 weeks of observation, the anterior chamber deepened but IOP failed to raise over 5 mm Hg and BCVA dropped to 20/200, and gonioscopically the device could be seen inserted in the supraciliary space with only the neck and one retention ring visible (Fig. 1). Fundal examination revealed hypotony maculopathy with choroidal and retinal folds over the posterior pole (Fig. 2). Ultrasound biomicroscopy showed the device correctly placed in the supraciliary space without any other abnormality. 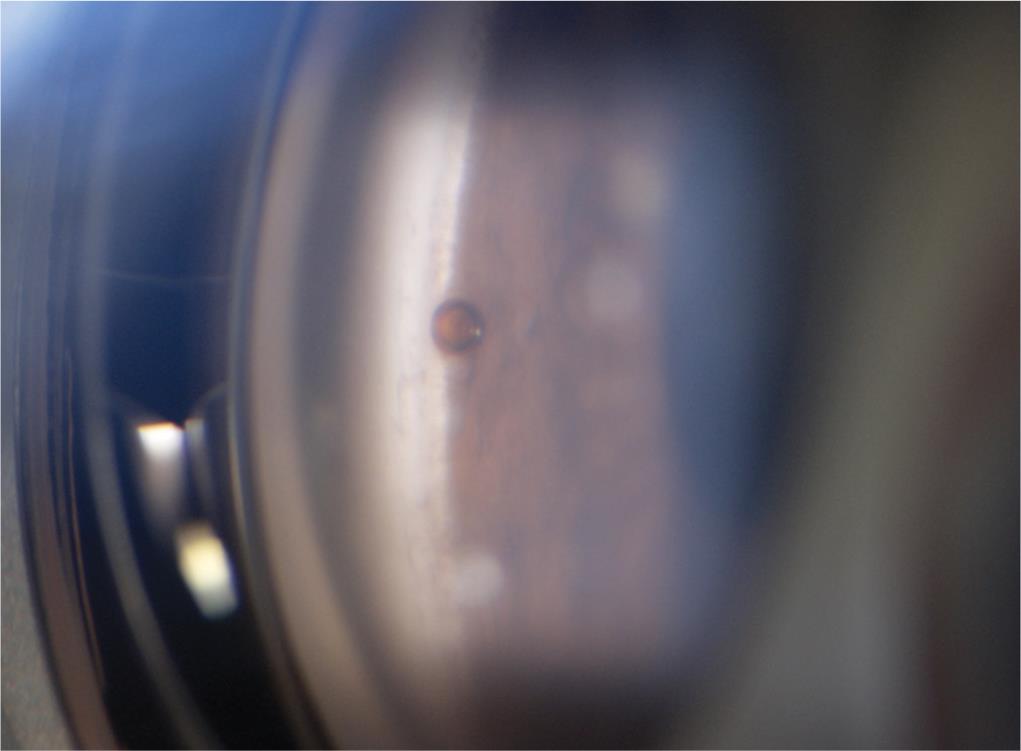 Fig. 1: Gonioscopy of the right eye 2 weeks after implantation 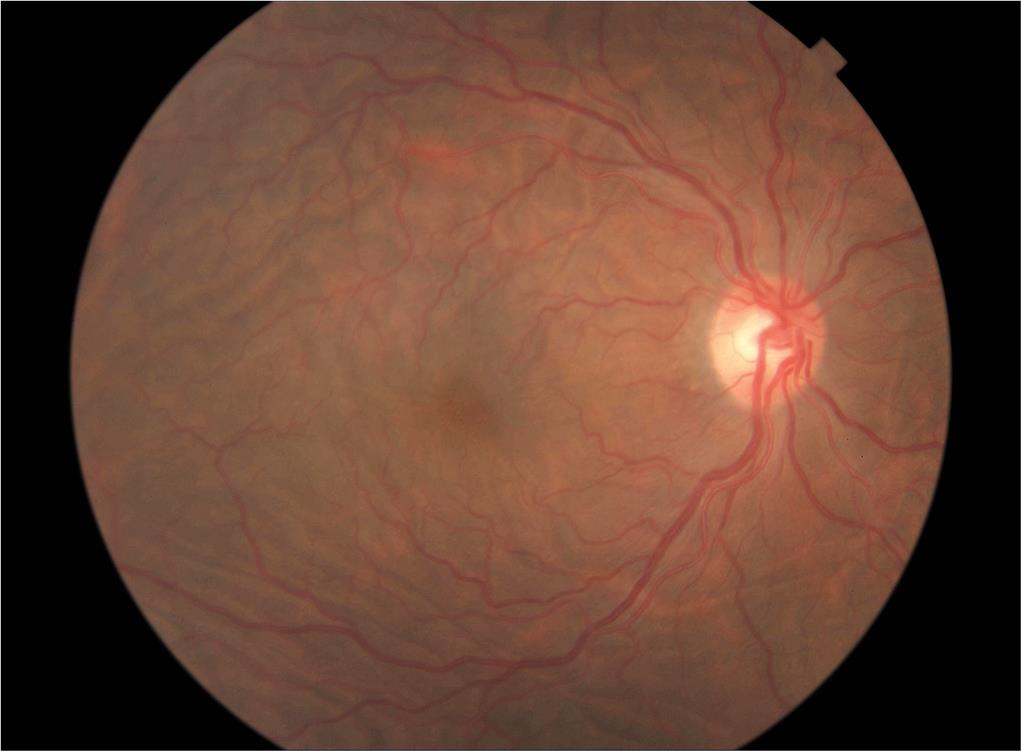 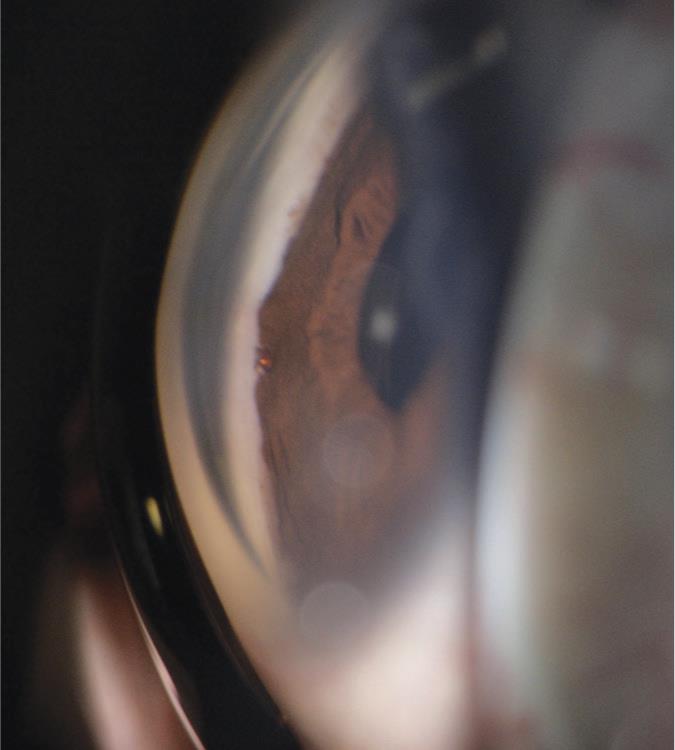 Fig. 3: Gonioscopy of the right eye 3 months after laser treatment

After 3 weeks without improvement, we decided to try to occlude the device inducing the formation of synechiae with the application of argon laser burns on the peripheral iris and ciliary band around the device. A total of fifteen 400 microns diameter burns with 200–250 mW were applied with previous pupillary pharmacological dilation; nonsteroidal anti-inflammatory drops and tropicamide were prescribed for 7 days.

One week after laser treatment, the IOP risen to 8 mm Hg and the iris started creeping over the device’s neck; 3 weeks later, the device was barely seen through the newly formed synechiae (Fig. 3) and IOP was 16 mm Hg and BCVA recovered to 20/60.

At 4 weeks, the patient presented to the emergency department with pain and an IOP of 30 mm Hg, and device was no longer visible on examination; topical IOP-lowering medication was restarted (timolol–dorzolamide) and has since been controlled under 16 mm Hg, without progression on visual fields.

The device on the left eye remained functional with IOP under 16 mm Hg for the first 3 months after implantation, after which time IOP started to rise up to 20 mm Hg, and the same combination therapy was prescribed, with adequate response. Bimestral endothelial counts have been recorded without significant endothelial loss.

Hypotony is a rare complication of MIGS, and it has been previously reported in patients with high myopia and higher preoperative IOPs during either trabecular or suprachoroidal procedures.8 The COMPASS study6 found 2.9% (11 patients) of hypotony after uneventful noncomplicated phacoemulsification-CyPass® surgery, but only three of them developed maculopathy and all patients resolved with conservative management.

Cyclodialysis clefts are surgical or traumatic complications that present with hypotony and a slightly shallow anterior chamber when the ciliary body detaches from its insertion in the scleral spur. Suprachoroidal devices take advantage of the negative pressure of the suprachoroidal space allowing aqueous to freely flow through the cleft with little resistance and reduce IOP in a somewhat controlled fashion. Inadvertent surgical trauma during the device placement can create a larger than intended cleft around the device and produce lower IOP readings. The COMPASS study6 reported 7 eyes with a cleft of >2 mm, but none of them were associated with hypotony or other sequelae, and 85% closed spontaneously within 6 months.

Management usually includes cycloplegic drops to relax the ciliary muscle and bring it closer to the scleral spur to favor adherence. Different laser protocols have been described to induce inflammation, tissue adhesion, and closure of the cleft.9–11 When laser and medical management fails, surgical ab externo cyclopexy techniques have proven to be useful.

Sii et al.7 have recently described two myopic patients with persistent hypotony after CyPass® implantation, which were managed with intraluminal insertion of 4-0 monofilament nylon with resolution of maculopathy and final IOPs of 10 and 15 mm Hg.

In this case, the device was successfully obstructed through a laser-induced inflammatory response of the iris and angular tissue around the device. After 3 weeks, the device was completely covered by the iris, and therefore, IOP spiked, as it is commonly seen after closure of traumatic cyclodialysis clefts. In contrast to the intraluminal suture occlusion technique, in which some flow is presumed to still occur between the suture and the internal device’s wall, the synechial obstruction nullifies the device completely, therefore needing reinstating pharmaceutical control or performing additional glaucoma procedures.

Our patient has remained on target IOP with no evidence of glaucoma progression with medication. No new surgical proposal has been necessary, but it has not been discarded completely.

This case of ocular persistent hypotony secondary to cyclodialysis cleft induced by CyPass® implantation was successfully treated with argon laser burns, and IOP peak produced by the total obstruction of device lumen has good response to topical medication. This technique is less invasive in comparison with previously described and showed no significant endothelial loss in specular microscopy; a careful follow-up of these patients must be carried out for avoid further complications.

In this report, the authors showed a laser treatment-based approach for management of persistent hypotony secondary to CyPass® implantation. In the knowledge of the authors, there are no previous experience reported for the management of this complication using laser or that avoid intraocular surgery. This case could guide other physicians in similar cases.

The authors would like to acknowledge Fundacion Hospital Nuestra Señora de la Luz for funding and support during this case study.