Source of support: An unrestricted/challenge award to Yale Eye Center from the Research to Prevent Blindness (RPB), Inc.

Aim: The aim of this study is to report cyclodialysis cleft creation during Kahook dual blade (KDB) goniotomy.

Background: No known reports of cyclodialysis clefts have been published to the authors’ knowledge after KDB goniotomy.

Case description: A 55-year-old myopic male with primary open angle glaucoma in both eyes (OU) underwent routine cataract extraction and intraocular lens implant with KDB goniotomy in the right eye (OD). Preoperative intraocular pressures (IOP) OD were in the low 20 mm Hg range on timolol and bimatoprost. Postoperative IOP was 4 mm Hg, with a moderate depth anterior chamber. Gonioscopy was slit in all quadrants, with no structures visible, and no improvement on indentation. Mild macular choroidal folds were present OD. Ultrasound biomicroscopy (UBM) revealed an area of supraciliary fluid. Anterior chamber reformation with viscoelastic was performed and repeat gonioscopy revealed a cyclodialysis cleft from 2:00 to 3:00. Treatment with multiple sessions of argon laser photocoagulation successfully closed the cleft.

Conclusion: KDB goniotomy may be complicated by cyclodialysis cleft formation and hypotony maculopathy. Visualization of a cleft on gonioscopy may require anterior chamber reformation.

Clinical significance: With an increasing use of KDB for goniotomy, previously unreported complications may arise including cyclodialysis cleft and resultant hypotony maculopathy. Because cleft following KDB goniotomy is rare, suspicion may be low and diagnosis could be delayed in the setting of postoperative hypotony with closed angles.

In recent years, surgical options for IOP lowering in glaucoma patients have expanded, from surgeries to bypass the natural outflow channels to removing trabecular meshwork (TM), one of the main sites of aqueous outflow resistance. Multiple devices and techniques have emerged to perform goniotomy or ab-interno trabeculotomy, in which the TM and the inner wall of Schlemm’s canal are stripped to allow aqueous direct access to the outflow channels.1 The single-use KDB for goniotomy was introduced in 2015 for near complete removal of the TM without damage to adjacent tissues.2 It has a sharp distal tip that is used to easily enter the Schlemm canal through the TM and a ramp to lift the TM to facilitate cutting of the TM by two blades. Once the blade is seated, it is advanced along the nasal TM superiorly and inferiorly to create two parallel incisions along the anterior and posterior edges of the TM with a resulting free strip of TM. Short-term results of the KDB have revealed a favorable safety profile. Unlike traditional filtering surgery, no reports of hypotony have been reported.2

Cyclodialysis clefts occur when the longitudinal ciliary muscle fibers separate from the scleral spur, most commonly as a result of significant trauma or intraocular surgery. Hypotony may occur with passage of aqueous fluid into the suprachoroidal space and decreased production of aqueous due to decreased perfusion of the ciliary body. To our knowledge, we report the first case of cyclodialysis cleft following routine cataract extraction with intraocular lens implant and KDB goniotomy. Diagnosis of the cleft was delayed due to 360° of angle-closure with no improvement on indentation with dynamic gonioscopy. After unsuccessful conservative treatment, argon laser photocoagulation was performed with successful closure of the cleft and increase in IOP.

A 55-year-old myopic male with primary open angle glaucoma OU was referred for the evaluation of hypotony following clear cornea phacoemulsification cataract extraction and intraocular lens placement, combined with KDB goniotomy OD, 2 months prior to presentation. He had previously underwent successful cataract extraction combined with KDB OS. Preoperatively, the IOPs OD were in the low to mid-20s mm Hg range on timolol and bimatoprost. One day after surgery, his IOP was 4 mm Hg and remained 4 mm Hg despite medical management with topical difluprednate and cyclopentolate. His best corrected visual acuity (BCVA) was OD 20/20 − 3 and OS 20/20 − 2 with manifest refraction OD +4.00 − 6.00 × 175 and OS −2.00 − 3.75 × 006. Implanted intraocular lenses were Alcon model MN60MA OD −2.0 D and OS −5.0 D. Axial lengths of OD and OS were 30.23 mm and 34.37 mm, respectively. He subsequently developed macula changes and his BCVA OD dropped to 20/40 + 2. Slit lamp examination did not show any filtration blebs. Anterior chamber was of moderate depth (Fig. 1A). Gonioscopy revealed closed angles with no improvement on indentation. Fundus examination revealed mild macular choroidal folds. UBM revealed a supraciliary effusion at 3:00 (Fig. 1B). Given the persistent hypotony, therapeutic and diagnostic anterior chamber reformation was performed with viscoelastic (Healon®). Repeat gonioscopy OD now showed grade III angles open to scleral spur with a cyclodialysis cleft from 2:00 to 3:00 (Fig. 2). IOP increased to 6 mm Hg. The patient subsequently underwent 3 sessions of argon laser photocoagulation OD. Six months after his cataract and KDB goniotomy, his visual acuity was OD 20/20 − 1 corrected with refraction OD plano −2.25 × 90 and IOP 14 mm Hg, with an improvement in the macular choroidal folds.

Figs 1A and B: Ultrasound biomicroscopy (UBM), right eye; (A) Prior to anterior chamber reformation, UBM revealed moderate anterior chamber depth with iridocorneal touch peripherally in the setting of hypotony (IOP 4 mm Hg); (B) UBM of anterior chamber at 3:00, with supraciliary fluid and cyclodialysis cleft 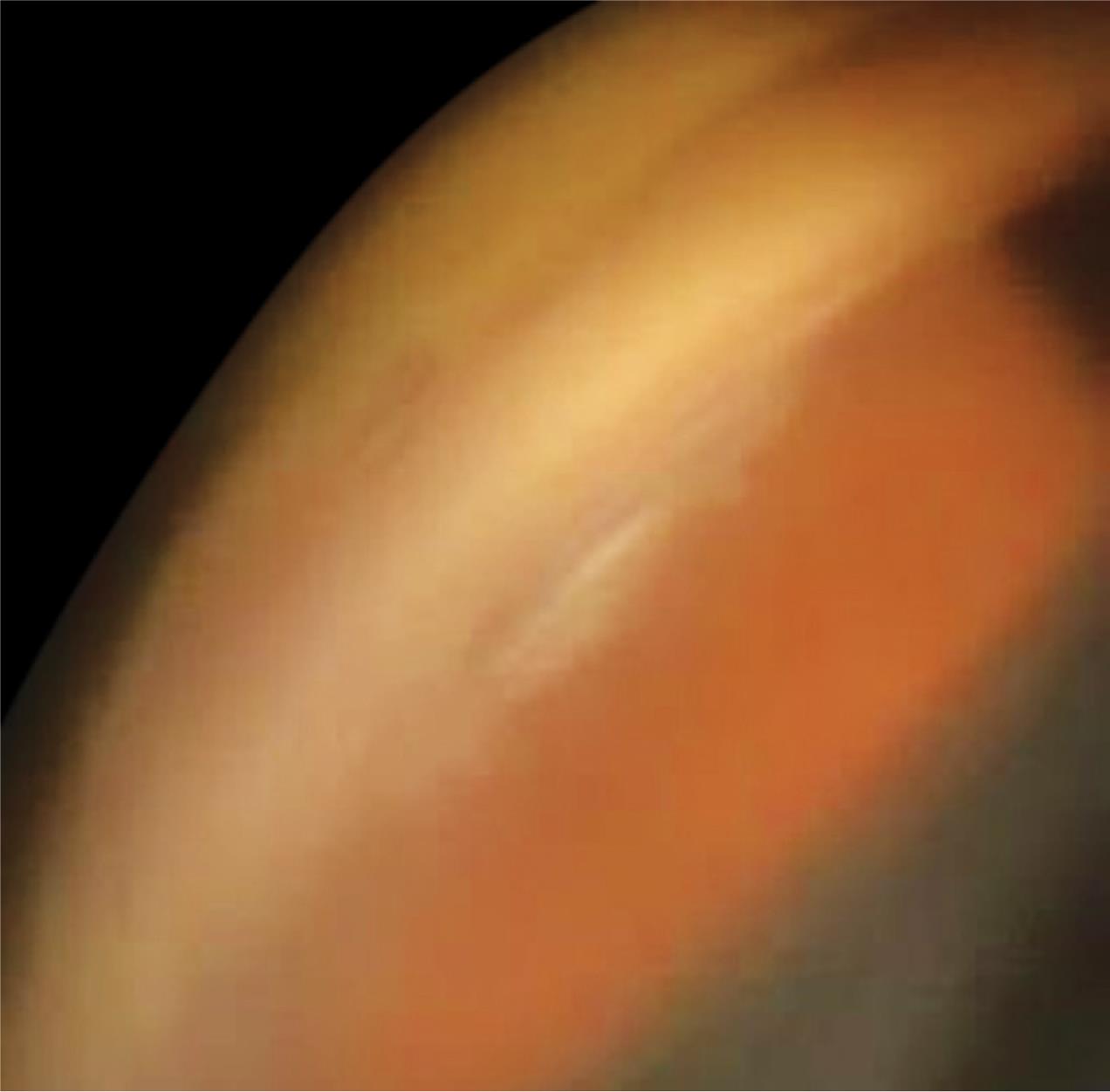 Fig. 2: Slit lamp photograph with gonioscopy, right eye, after anterior chamber reformation with viscoelastic. A cyclodialysis cleft is visible from 2:00 to 3:00

Inadvertent cyclodialysis clefts are rare during intraocular surgery. They have been reported to occur during cataract surgery; however, they have mostly been small enough to resolve with cycloplegics.3 One cleft that was associated with extracapsular cataract surgery without phacoemulsification spanned two clock hours and resolved after argon laser photocoagulation.3

Our patient underwent clear cornea phacoemulsification with KDB. While the phacoemulsification or the intraocular lens implantation could have caused inadvertent trauma, causing cyclodialysis cleft with iris manipulation or during intraocular lens implantation, it seems unlikely given the nasal position of the cleft. The cleft spanned 1 clock hour and was located nasally, where the KDB was performed. The reported cases associated with cataract surgery were located superiorly.

Iridodialysis has been associated with KDB goniotomy; however, there have been no reports to the authors’ knowledge of KDB goniotomy associated with cyclodialysis cleft creation.2 Trabectome has been reported to induce a cyclodialysis cleft.1 Both instruments are intended to strip TM in the nasal angle with a pointed footplate. KDB manually removes the TM strip, while trabectome ablates the TM with electrocautery. The KDB does not use any electrical input; however, as demonstrated in this case, cyclodialysis cleft creation is possible with malposition of the blade posterior to the TM, or with trauma to the peripheral iris root or CB with an inadvertent nick with the blade (particular caution may be needed in myopic eyes with stretched and thinned tissues). In performing angle-based procedures, preoperative and intraoperative gonioscopy technique is crucial, to properly identify the TM. To visualize lightly pigment TM, staining with trypan blue is a helpful technique.

When hypotony occurs after surgery in the absence of a wound leak, a cleft may be suspected. Given the absence of overt intraoperative complications in this patient, there was very low suspicion of a cleft in the immediate postoperative period. Furthermore, the diagnosis was delayed due to initially having a normal corrected visual acuity, and the observance of 360° of iridotrabecular contact on gonioscopy, which obscured the visualization of the cleft. UBM supported the presence of a cleft at 3:00 with the presence of supraciliary fluid. The technique of reforming the anterior chamber with viscoelastic to visualize the angle and elucidate clefts has been described.4 This technique led to the confirmation of a cyclodialysis cleft in our patient and visualization of the full extent of the cleft. Since the cleft could be visualized, argon laser photocoagulation could be recommended and applied to the entire cleft area, with resolution of the hypotony.

Cyclodialysis cleft with resultant hypotony may occur during KDB goniotomy. Given its rarity, diagnosis may be delayed. Anterior chamber reformation with repeat gonioscopy is an important technique to visualize a possible cleft.

Cyclodialysis cleft with associated hypotony and maculopathy may occur with KDB goniotomy.

This work has been supported in part by an unrestricted/challenge award to Yale Eye Center from the Research to Prevent Blindness (RPB), Inc.