A 79-year-old man underwent phacoemulsification (phaco) with TORIC intraocular lens (IOL) insertion combined with Kahook dual blade (KDB) goniotomy of the right eye several months after a stand-alone phaco in the fellow eye. He had significant against-the-rule astigmatism in both eyes (2.41D @ 10° right, 2.40D @ 160° left) preoperatively. Postoperatively, nearly all corneal astigmatism disappeared in the right eye (0.60D @ 37°), while it remained the same in the left eye (2.00D @ 167°). Ophthalmologists should be aware that KDB may have an unreported effect of altering corneal astigmatism, which should be considered when inserting TORIC IOL.

Kahook dual blade (KDB) goniotomy (New World Medical, Rancho Cucamonga, CA, 2015) has become one of the most popular angle surgeries to date. Its dual blade design allows complete removal of the diseased trabecular meshwork (TM) via an ab-interno approach to decrease aqueous outflow resistance.1 The effect of KDB on post-op corneal astigmatism is yet to be studied.

After 4 months of observation, repeat topography revealed that his OD astigmatism had further shifted from the preoperative 2.41D @ 10° to postoperative 0.6D @ 37°, while his left eye changed only slightly from 2.4D @ 160 to 2.06D @ 167° (Fig. 2), without any topographical or clinical sign of corneal dystrophy. Fortunately for this patient, the shift in his corneal astigmatism in OD was offset by the rotation of the toric lens. The patient still had 1.25D of residual astigmatism at 54° OS but was satisfied with vision corrected by glasses in that eye.

Due to the anatomical relationship between the TM, peripheral iris, anterior chamber angle, and posterior cornea, patients who undergo near-total removal of their sectoral TM may experience changes in any existing posterior corneal astigmatism in that axis. To our knowledge, no studies have evaluated the effect of KDB goniotomy on corneal astigmatism, but a recent report showed phaco-KDB was no more likely to result in refractive surprise than phaco alone.2

This case is unique, as the patient had a fellow eye to serve as a control, which did not show changes in corneal astigmatism after phaco alone. This patient’s postoperative topography showed near-complete resolution of his preoperative against-the-rule astigmatism in OD where he had nasal TM removed with KDB goniotomy. Remarkably, rotation of his TORIC IOL essentially negated its effect, leading to near-plano uncorrected visual acuity of 20/20 OD. If KDB does truly affect corneal astigmatism, then clinicians must consider when choosing to implant TORIC IOLs. Further studies to investigate the exact patterns and amount of astigmatism change will help determine the KDB-related surgeon factor to predict better outcomes of TORIC IOLs. 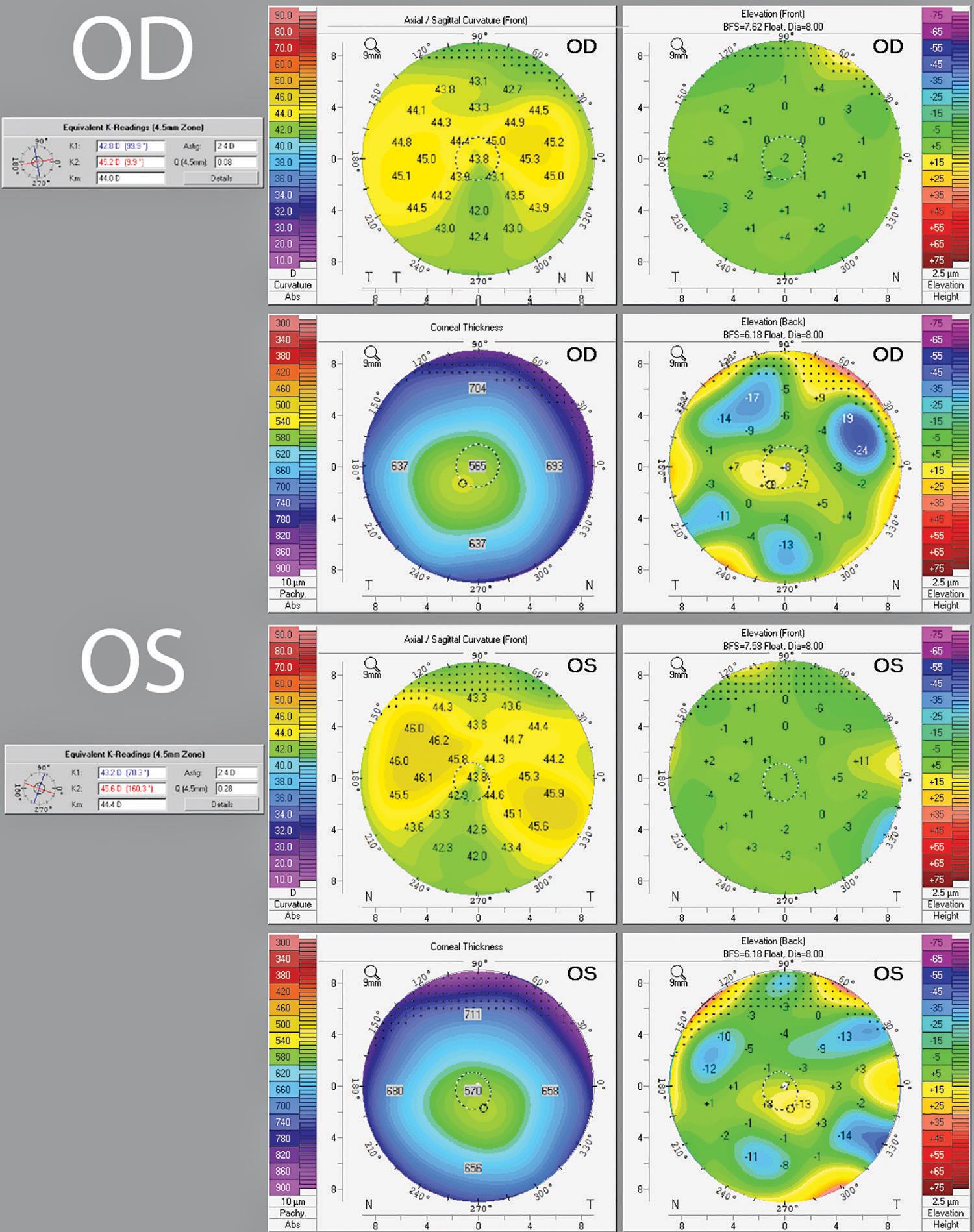 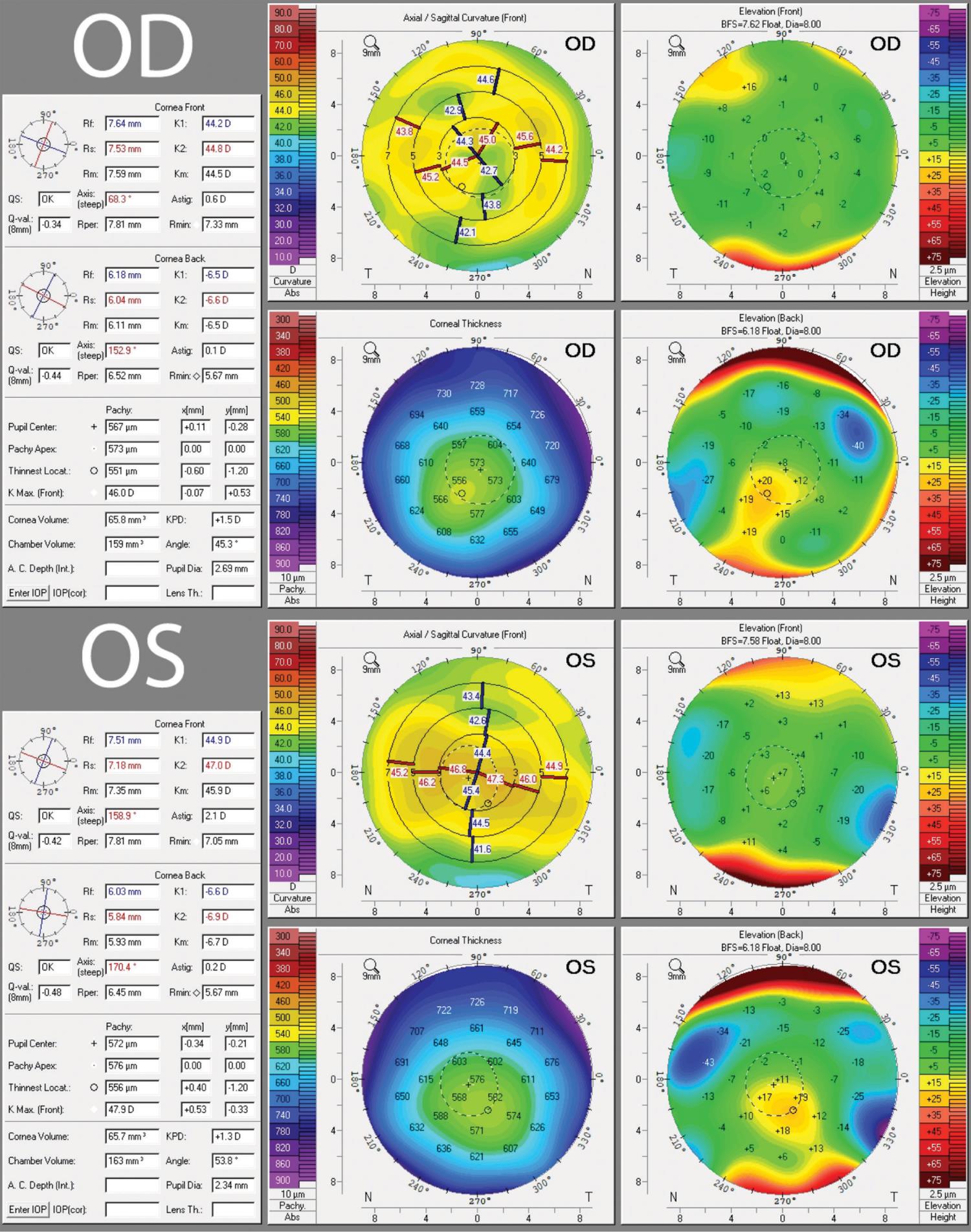 Fig. 2: Postoperative topography 4 months after the second eye showed resolution of OD astigmatism to 0.60D @ 37° while OS remained unchained at 2.1D @ 167°. Axis measurements were derived from Holladay report for accuracy (not pictured here)