There are a number of surgical options for treating medically refractory glaucoma. Traditional incisional surgery, such as trabeculectomy and aqueous shunts (tubes) are commonly used, however, both require normal sclera and conjunctiva to be performed safely. The same is true for other less invasive extraocular procedures, such as transscleral cyclodiode laser and deep sclerectomy. In patients with severe scleromalacia, surgical treatment of glaucoma is challenging and limited to intraocular procedures.

A 60-year-old man with a 30-year history of granulomatosis with polyangiitis (Wegener's granulomatosis) was referred with uncontrolled intraocular pressure (IOP) in his left eye. Multiple episodes of severe necrotizing scleritis had occurred in both eyes and resulted in phthisis bulbi with no perception of light of the right eye. Long-term systemic immunosuppression including methotrexate, prednisolone, cyclophosphamide, and rituximab only partially controlled the inflammation in his remaining left eye.

Visual acuity was 6/24 (improving to 6/12 with pinhole) with normal optic nerve appearance and a full visual field. Significant cataract was present. Despite a patent peripheral iridotomy, the peripheral anterior chamber was shallow and gonioscopy documented extensive peripheral anterior synechiae (PAS). This was thought to be a secondary angle closure with the PAS due to chronic inflammation, especially given the axial length was 25.06 mm.

The multiple episodes of scleritis had resulted in extensive severe scleromalacia of the left eye (Fig. 1) with excessive cicatrization of the lower lid causing over 5 mm of inferior scleral show (Fig. 2). 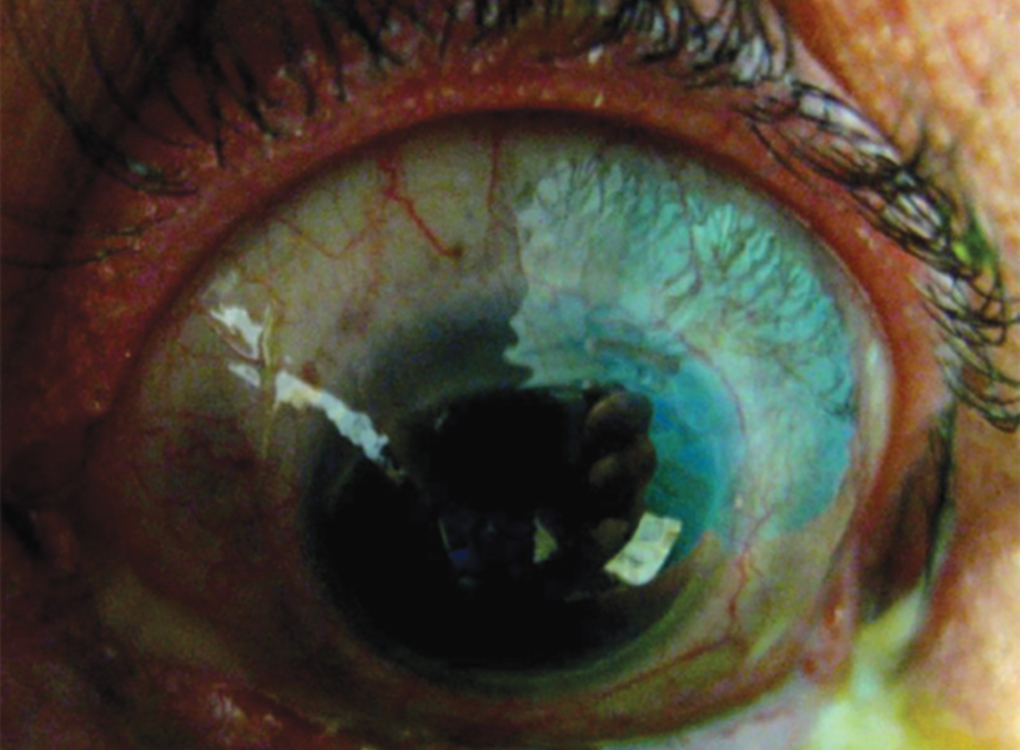 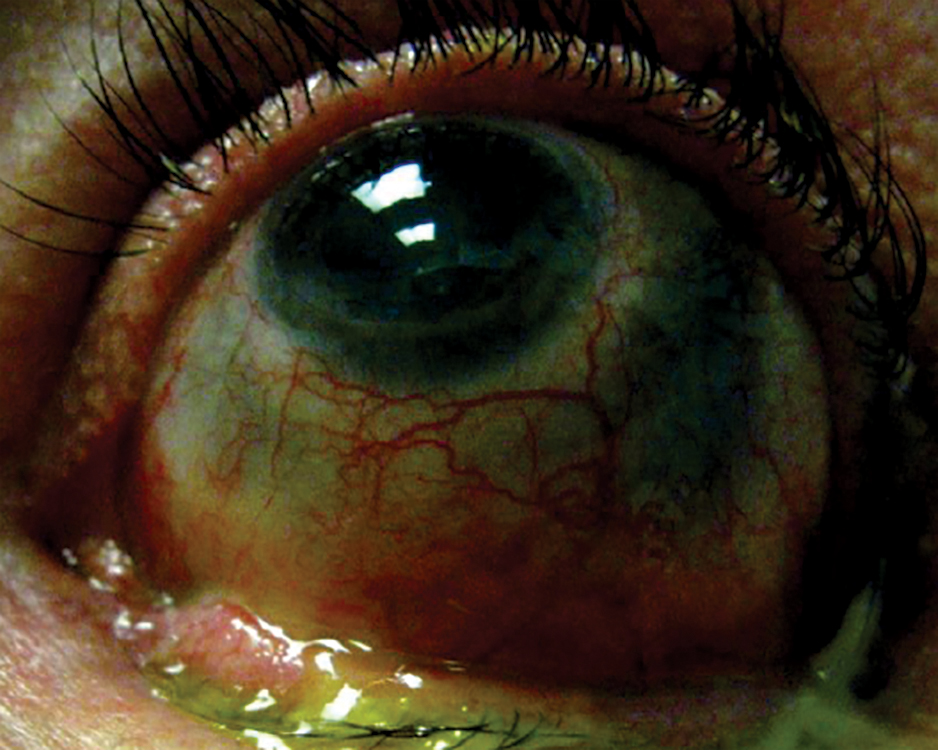 (A) Endoscopic and (B) microscope view of endoscopic cyclophotocoagulation 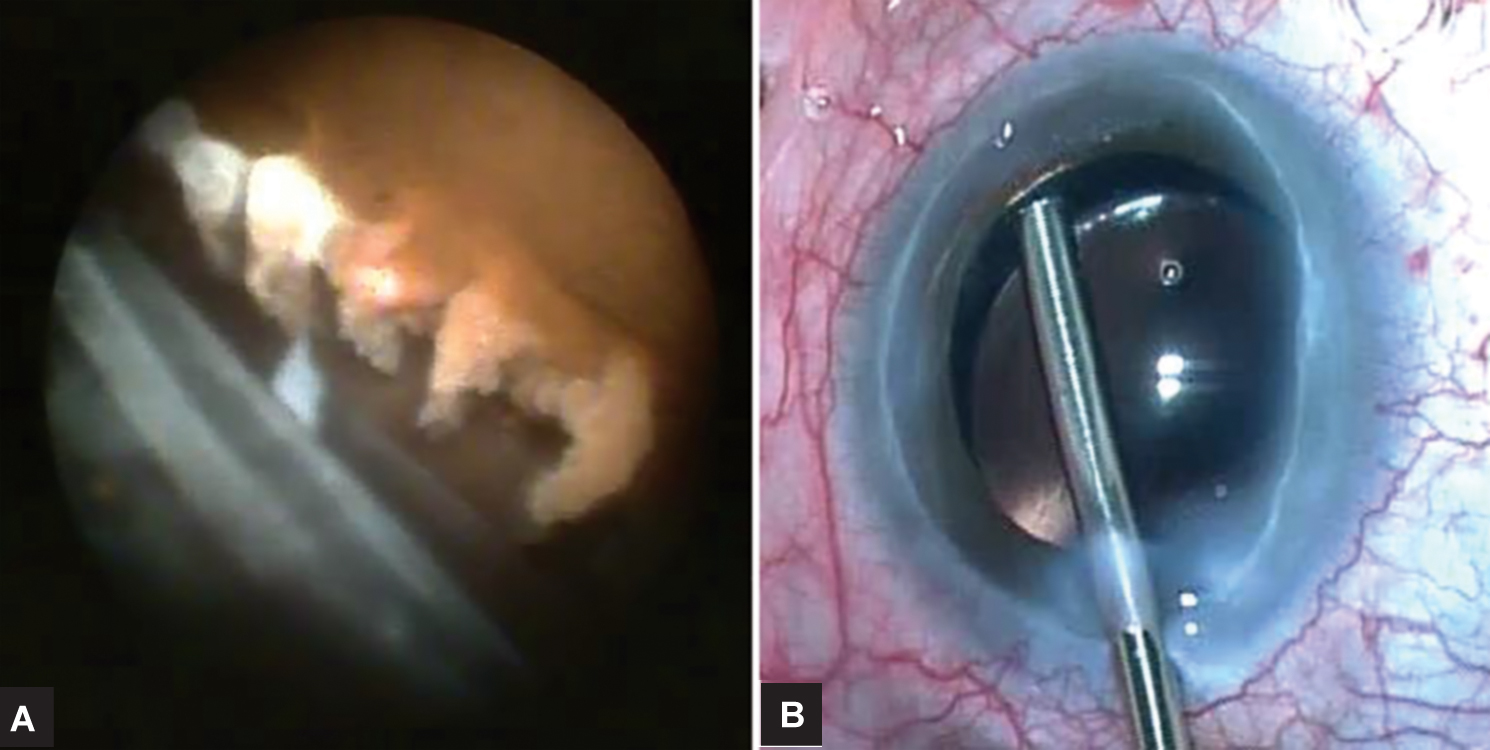 Choice of glaucoma surgery was very limited with all scleral or trans-scleral modalities and angle-dependent minimally invasive glaucoma surgery (MIGS) contraindicated due to scleromalacia and extensive synechial closure respectively. Phacoemulsification with endoscopic cyclophotocoagulation (ECP) was performed (by Goyal) under general anesthesia (Fig. 3). Inflammatory provocation was minimal and the angle, sclera, and conjunctiva were avoided. Pulsed immunosuppressive cover, intracameral dexamethasone, intravitreal triamcinolone acetate (Kenalog), and intensive postoperative preservative free topical steroids were employed to reduce the risk of postoperative inflammation on a background of chronic uveitis.

One year following surgery, IOP remains well-controlled at 12 mm Hg on timolol/dorzolamide combination therapy and vision improved from 6/24 to 6/6.

The surgical management options were both limited and challenging. The extensive scleromalacia in the superotemporal and superonasal quadrants meant placement of a tube or a trabeculectomy was not possible. Inferior tube placement carried unacceptable risk of erosion due to the significant inferior conjunctival exposure and scleromalacia, plus surgically-induced inflammation and scleritis may have led to perforation.

The definition of MIGS tends to encompass any glaucoma procedure that avoids conjunctival dissection and is thus approached via an ab interno clear corneal incision.1 Most modalities of MIGS target the drainage angle in an attempt to increase the aqueous outflow, often by using a plethora of permanent intraocular implants.2 The presence of widespread PAS meant that performing of any angle-MIGS procedure is relatively contraindicated and would be at high risk of device occlusion.

This case illustrates that ECP can be successfully used to control IOP in challenging patients with complex secondary glaucoma where the use of traditional incisional surgery and other MIGS procedures are all contraindicated. Endoscopic cyclophotocoagulation is one of few MIGS procedures that reduce aqueous production and is a minimally invasive, safe, and conjunctival-sparing procedure amongst a myriad of MIGS procedures that target the drainage angle to increase trabecular or uveoscleral flow.

The choice amongst the many surgical options for treating medically refractory glaucoma needs to be selected based on the unique circumstance of individual patients. Factors, such as the condition of the sclera or conjunctiva, the configuration of the drainage angle, and the suitability of permanent intraocular implants need to be considered against the safety and efficacy in context of the level of IOP reduction required of possible treatments.