Since its introduction 40 years ago, trabeculectomy has become the most frequently performed surgical procedure for glaucoma.1 The adjunctive use of antifibrotic agents, such as mitomycin C (MMC) in filtration surgery, has increased success rates, but also led to a higher incidence of ocular hypotony.2,3 Low intraocular pressure (IOP) attributable to overfiltration following trabeculectomy is a common early postoperative complication, ranging from 1 to 18% of the cases.2-4 It may lead to flat anterior chamber,5 choroidal detachment,6 hypotony maculopathy,7 optic disk edema,8 cataract development,9 and reduced visual acuity.10

The way each individual eye is affected by low IOP values may vary significantly. In this context, hypotony definition itself may also vary. When we think about objective absolute values, hypotony has been defined as an IOP less than 6.5 mm Hg by Pederson.11 Considering a more clinical point of view, hypotony has been considered as a condition in which IOP is low enough to result in anatomical and/or functional disturbances.12 It should be emphasized that hypotony may be accompanied by subclinical maculopathy in some cases, in which macular changes are only detected by high-resolution imaging devices.13 If not treated in a timely manner, hypotony maculopathy may result in permanent structural and functional damage.10,14

Many techniques have been developed to treat overfiltration following filtering procedures, such as bandage contact lens,15 intrableb autologous blood injection,16 cryotherapy,17 laser therapy (argon, Nd:YAG),18 compression mattress sutures,19-21 combined conjunctival compression sutures and autologous blood injection,19,20 and surgical revision of the trabeculectomy (open site flap resuturing).22 Overall, outcomes seem to vary significantly between studies and according to each case, and none of the above-mentioned methods has been adopted as a gold standard option for successfully managing such cases.23,24 In addition, these surgical interventions may also be associated with complications, such as hyphema, decreased vision, trabeculectomy failure, pain, and infection.25 In this study, we sought to investigate surgical outcomes and success predictors of transconjunctival scleral flap resuturing – a minimally invasive not so widespread technique – for the management of hypotony due to overfiltration following trabeculectomy with MMC.

Topical anesthesia was administered using xylocaine gel 2%. Topical 5% povidone-iodine solution eye drops were then instilled. A lid speculum was used to facilitate the procedure and to limit the risk of wound contamination by lashes. Through the intact conjunctiva, a minimum of two 10.0 nylon sutures were placed through the scleral flap, then passed through the adjacent sclera and conjunctiva, and knotted tightly over. All sutures were then buried. Postoperatively, all patients were treated with local antibiotics and steroids, tapered along 14 days.

*Data are given as mean ± standard deviation whenever indicated

No serious adverse event was recorded. In the majority of the cases, sutures were already buried under the conjunctiva after only a few days after the procedure (Figs 1A and B). No bleb or wound leakage was noted postoperatively.

Although low IOP attributable to overfiltration following trabeculectomy is a uncommon early postoperative complication, it may lead to serious visual disability due to choroidal effusion, maculopathy, flat anterior chamber, optic neuropathy, and cataract development.10,23,26,27 Adjunctive use of antifibrotic agents with trabeculectomy may increase the incidence of postoperative hypotony.2,3 Many techniques have been developed to treat overfiltration with hypotony maculopathy following filtering procedures, including transconjunctival scleral flap resuturing. Although good results (few studies) have been previously reported, this technique does not resolve all cases of hypotony due to overfiltration following trabeculectomy. In this context, the study not only reinforces the efficacy and safety data of transconjunctival scleral flap resuturing, but also underlines the time interval between trabeculectomy and flap resuturing as a significant predictor of hypotony resolution. These findings highlight the importance of early surgical reintervention in these cases, as odds of reaching hypotony resolution were halved in eyes left untreated for more than 6 months.

Transconjunctival scleral flap resuturing: (A) Two sutures were placed; and (B) two days after the procedure, sutures were already buried under the conjunctiva 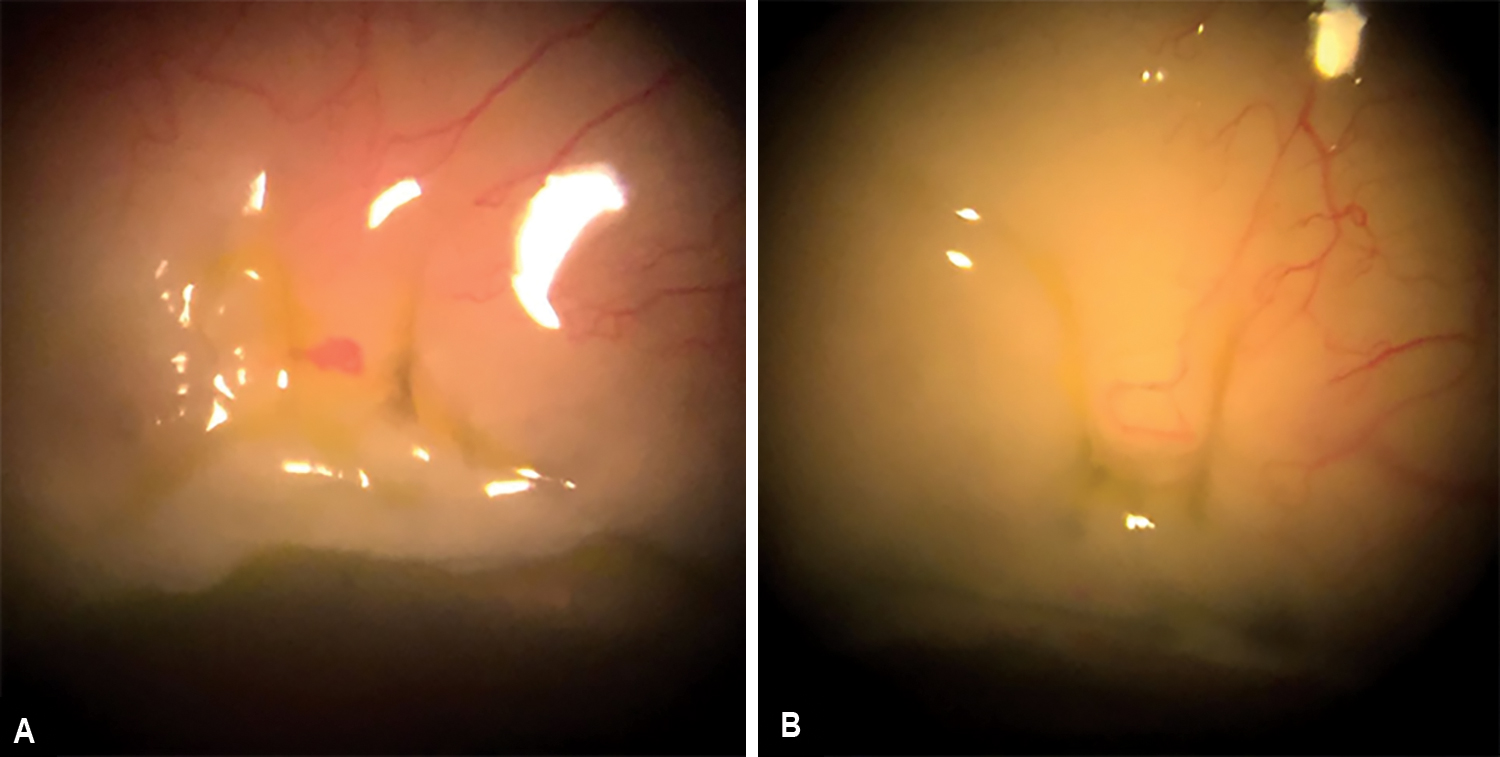 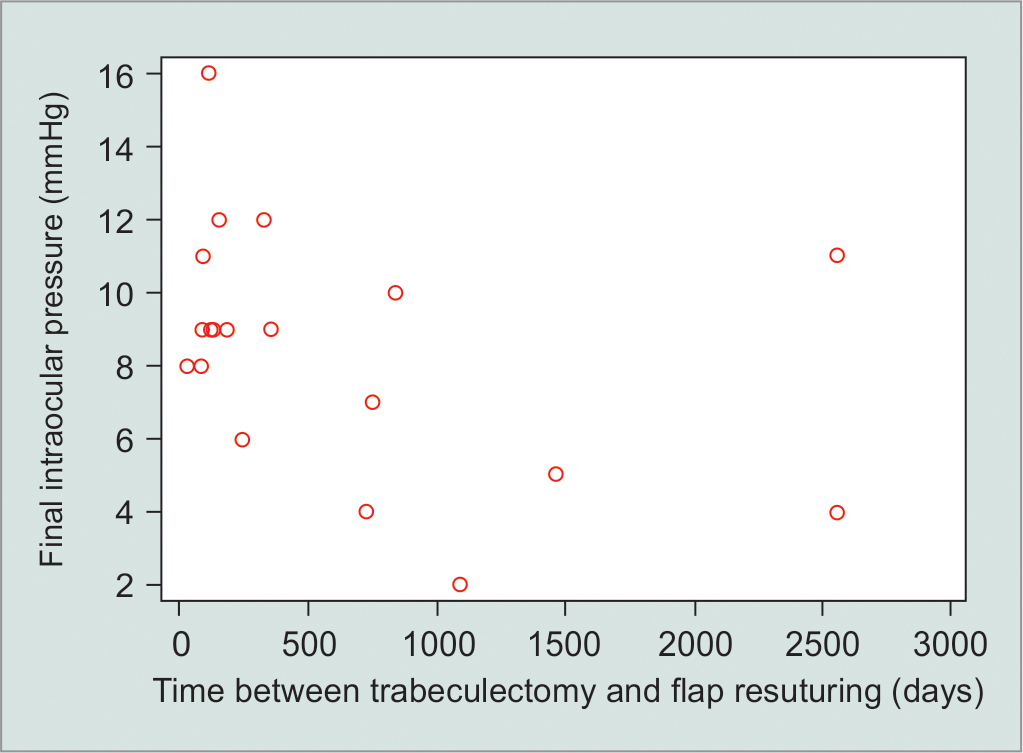 There are scant data in the literature when it comes to transconjunctival scleral flap resuturing. Regarding the few previously published studies, Maruyama and Shirato23 described a retrospective study in which mean IOP was 2.9 ± 1.4 mm Hg before and 8.4 ± 4.1 mm Hg at 12 months after flap resuturing. Another retrospective study showed statistically significant (p < 0.01) IOP increase (3–9 mm Hg) and BCVA improvement (20/100–20/30) 6 months after transconjunctival scleral resuturing flap.25 Eha et al,28 in 2008, published a prospective case study describing the outcome of 16 patients whose mean IOP was 9.6 mm Hg, and mean BCVA was 20/60, 6 months following the procedure. Finally, in 2013, the results of another retrospective study also demonstrated statistically significant IOP increase and BCVA improvement with the same surgical technique.29 All these above-mentioned studies focused specifically on procedure's efficacy and safety, not evaluating factors possibly associated with surgical outcomes. Nevertheless, we believe the results of this study corroborate their findings, as over 80% of our cases presented hypotony and maculopathy resolution, with a very similar mean IOP (8.5 mm Hg) at last follow-up visit.

At this point we believe it is important to discuss the clinical outcomes of the other available alternatives for post-trabeculetomy overfiltration management. Lynch et al.18 described a study with 23 patients that underwent YAG laser bleb remodeling due to overfiltration and hypotony. As a result, 64% of the treated eyes had an IOP increase of at least 3.0 mm Hg. Wise16 treated four patients with chronic hypotony and decreased vision after filtering surgery with autologous blood injection. In these eyes, mean IOP increased from 5.5 to 8.2 mm Hg following the injection. Nuyts et al,15 also performing intrableb autologous blood injection (22 eyes), found a mean IOP increase of approximately 4 mm Hg (from 4.3 ± 1.8 mm Hg before injection to 8.6 ± 4.6 mm Hg after injection). Haynes and Alward20 performed a combined procedure of autologous blood injection and bleb compression sutures to treat overfiltration with hypotony maculopathy in two patients and a small IOP increase was reported in both cases (patient 1: 3 to 5 mm Hg; patient 2: 2–5 mm Hg). Palmberg21 reported the results of a large series of patients treated with conjunctival compression sutures. Of the 46 treated eyes, 69% were classified as success following the procedure. Quaranta30 also performed conjunctival compression sutures for large blebs associated with ocular hypotony after uncomplicated trabeculectomy with MMC. Similar to the previously cited study, 64.4% of the eyes presented hypotony resolution (postoperative mean IOP: 13.4 ± 1.8 mm Hg. It is important to observe that patients profile, success criteria and main endpoints vary between studies, what limits a straight comparison between each technique. What seems clear is that even though IOP increase and visual acuity improvement may be obtained for many patients with such techniques, hypotony may persist in some eyes. Although, success predictors were not investigated in the above mentioned studies, our findings suggested the time interval between trabeculectomy and resuturing of the scleral flap as an important factor for hypotony resolution.

In clinical practice, it is of general consensus that hypotony duration is closely related to maculopathy resolution in eyes with postoperative hypotony. If timely managed, IOP increase usually leads to restoration of the normal smooth architecture of the retina, allowing realignment of photoreceptors and visual recovery.14,31 On the contrary, prolonged hypotony may cause irreversible fibrosis within the retina, choroid or sclera, maintaining the choroid in a folded position.14,31 In our study, even though maculopathy resolution was found in 85% of the cases following surgical reintervention, none of the variables investigated (including time interval between trabeculectomy and flap resuturing) was significantly associated with postoperative maculopathy resolution. This fact could be explained by the fact that hypotony maculopathy development has multiple underlying predisposing factors.32 In this context, two hypotheses arise: (1) None of the factors we investigated has an important effect on maculopathy resolution, (2) the IOP increase itself is strongly correlated with maculopathy resolution, thus mitigating the influence of any other factor.

It is important to stress some specific characteristics and limitations of our study. First, the retrospective (noncomparative) design of our study should be considered while interpreting its results. Second, our study has a limited sample size. A larger number of participants might have uncovered significant relationships that were not observed in our study (thus mitigating the chances of type II error). Third, the association between time interval (between trabeculectomy and flap resuturing) and patient's IOP at last follow-up visit had a weak coefficient of determination (R2 = 0.23). Therefore, this association accounted for only part of the hypotony resolution observed in these patients. Other factors not evaluated in this study might be related to hypotony resolution following transconjunctival sclera flap resuturing in these eyes.

Our findings support the use of transconjunctival scleral flap resuturing as an effective and safe alternative for hypotony management due to overfiltration following trabeculectomy. As time interval seems to negatively influence the odds of hypotony resolution, early reintervention is recommended in these cases.