Myopia is a known risk factor for glaucoma. The risk of developing glaucoma is reported to be two to three times higher in myopic individuals than in nonmyopic individuals.1,2 These myopic individuals often have enlarged optic disks with more oval configuration and large areas of peripapillary atrophy making diagnosis and management of glaucoma difficult in these cases.3

Retinal nerve fiber layer (RNFL) thickness is now considered as one of the sensitive indicator for predicting early glaucomatous damage.4-6 Optical coherence tomography (OCT) because of its excellent ability to assess peripapillary RNFL thickness has been extensively used for the diagnosis and follow-up of glaucoma and other optic neuropathies. Cirrus high-definition (HD) OCT (Carl Zeiss Meditec Inc., Dublin, CA), which is one of the newest versions of OCT, provides higher resolution and faster scan rate and has progressively replaced time domain OCT in the evaluation of glaucoma.7

This was a cross-sectional study, carried out after approval by All India Institute of Medical Sciences Ethics Committee and it adhered to the tenets of the Declaration of Helsinki. Informed written consent was taken from each enrolled patient. A total of 100 eyes of 100 healthy young patients were evaluated in the study and patients were divided in three groups according to their refractive status: Group I had 50 patients with emmetropia [spherical equivalent (SE) 0 D], group II had 25 patients with moderate myopia (SE between –4 D and –8 D), and group III had 25 patients with high myopia (SE between –8 D and –12 D). Patients with intraocular pressure (IOP) > 21 mm Hg, glaucoma, cataract, best corrected visual acuity < 20/20, refractive surgery, intraocular surgery, or any ocular pathology other than refractive error, diabetes, neurological disease, or any systemic illness were excluded from the study.

All subjects underwent a comprehensive ophthalmic evaluation which included visual acuity measurement by Snellen's chart, slit lamp examination, Goldmann applanation tonometry, gonioscopy, perimetry, fundus examination by slit lamp biomicroscopy, and indirect ophthalmoscopy. The refractive error from the manifest refraction was adjusted to the SE. Axial lengths were measured using ocular biometer (IOL Master, Carl Zeiss Meditec Inc.). Peripapillary RNFL thickness was measured using cirrus HD-OCT. Before testing, the pupil of each subject was dilated by instillation of 1% tropicamide and 2.5% phenylephrine hydrochloride to the eye three times over a 10 minutes period. After the subject was seated and aligned properly, three 200× 200-cube optic disk scans were obtained per eye, scans with signal strength below 7 were discarded, and new one was obtained. The scan that had the highest signal strength and was obtained with the least eye movement was selected. All scans were performed by a single operator. The average RNFL thickness, the average thickness in the four sectors — superior, inferior, temporal and nasal. and the average thickness in all clock hour positions was recorded. The superior clock hour was 12 o'clock, and the others were assigned accordingly in a clockwise manner in the right eye and counterclockwise in the left.

Statistically analysis was done using Statistical Package for the Social Sciences version 16. The Pearson correlation coefficient was used to determine relationship of RNFL thickness with axial length and age. Spearman's rho was used to evaluate relation between RNFL thickness and SE. One-way analysis of variance was used to compare the other variables among the three groups. Levene's test was used to assess the homogeneity of the variances. A value of p < 0.05 was considered to be statistically significant.

Table 1: Age distribution of patients in each group

Table 2: RNFL thickness measurements (in µm) of subgroups classified based on spherical equivalent

Scatter plots of the average RNFL thickness against: (A) Axial length; (B) spherical equivalent 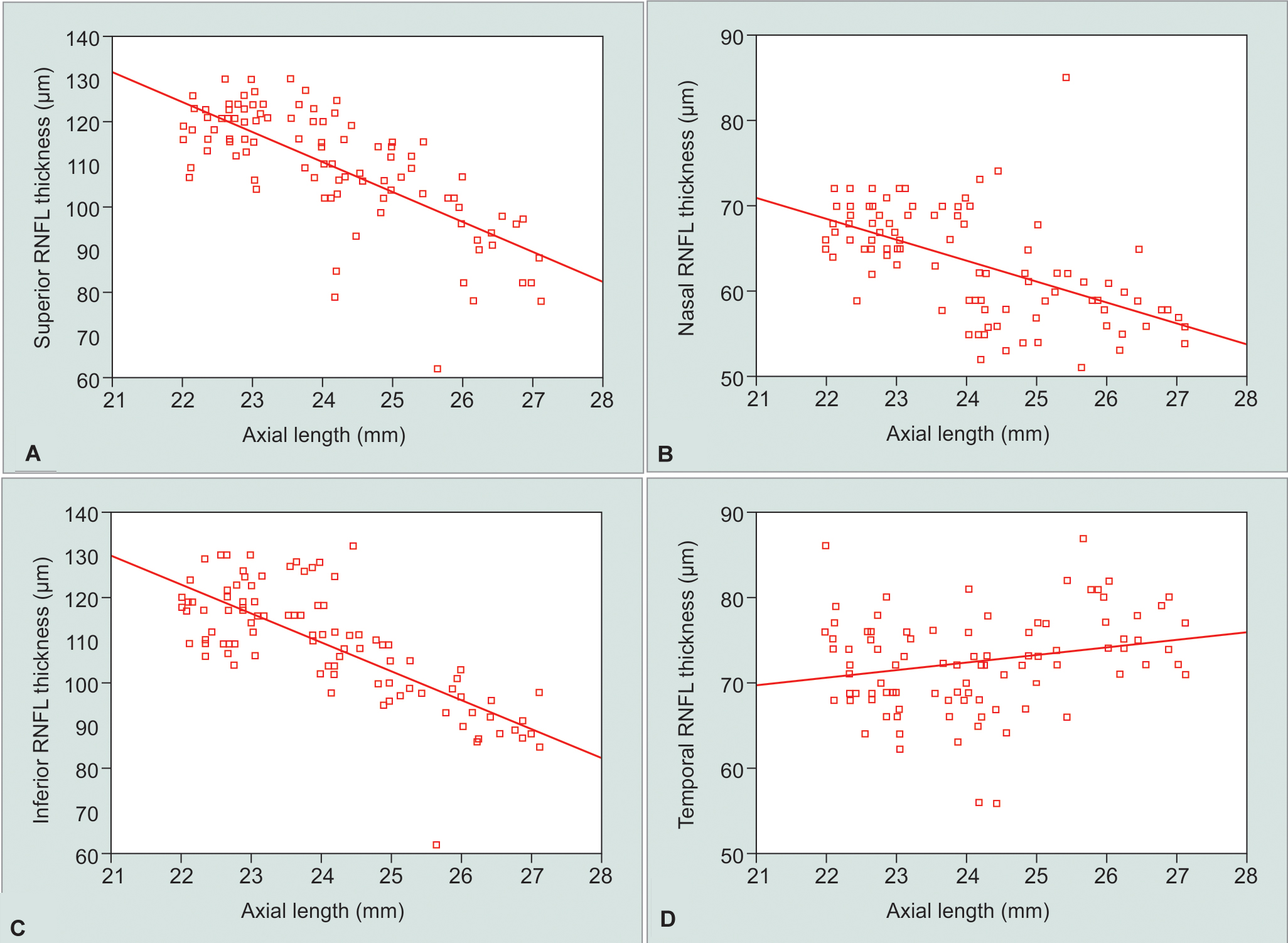 In a study by Rauscher et al,13 RNFL thickness decreased 7 microns for every 1 mm increase of axial length and 3 microns for every 1 diopter sphere increase of myopia which was more when compared to our study and previous other study. This decrease in RNFL with increasing Axial length can be because of larger AL which causes larger surface area and distribution of an equal amount of retinal nerves in larger area causing thinner RNFL. However, Hoh et al15 and various other studies18,19 failed to show any statistically significant correlation between RNFL thickness and axial length or SE. These differences can be due to poorer resolution of earlier generation OCT used in these studies. The cirrus HD-OCT used in our study has a better resolution (5 µ) and a faster scan rate of 26,000 A scans/second.

Quadrant-wise correlation of RNFL thickness with SE and axial length was done in our and various other study to determine if there is any change in distribution pattern of RNFL in myopes (Graph 3). Öner et al,12 noted a significant negative correlations between axial length and RNFL thickness in each of the four quadrants in their study, however, correction of magnification effect by Littmann's formula eliminated the relationship between RNFL thickness and axial length in each sector in their study. Several other studies in the past have also used magnification factor, as it has been found that actual scanning radius in eyes with greater axial length (myopic eyes) could be longer than 1.73 mm due to magnification effect, so using same-sized scan circle for measuring RNFL in patients with different degrees of myopia might be misleading because the RNFL thickness decreases with increasing distances from the optic disk. Although the actual scanning radius is longer than 1.7 mm in myopes, it necessarily does not mean that the RNFL is being measured farther from the disk margin as the optic disk size also increases with myopia, so we did not correct for magnification factor in our present study as there are chances of overestimation of RNFL after correction of magnification factor. 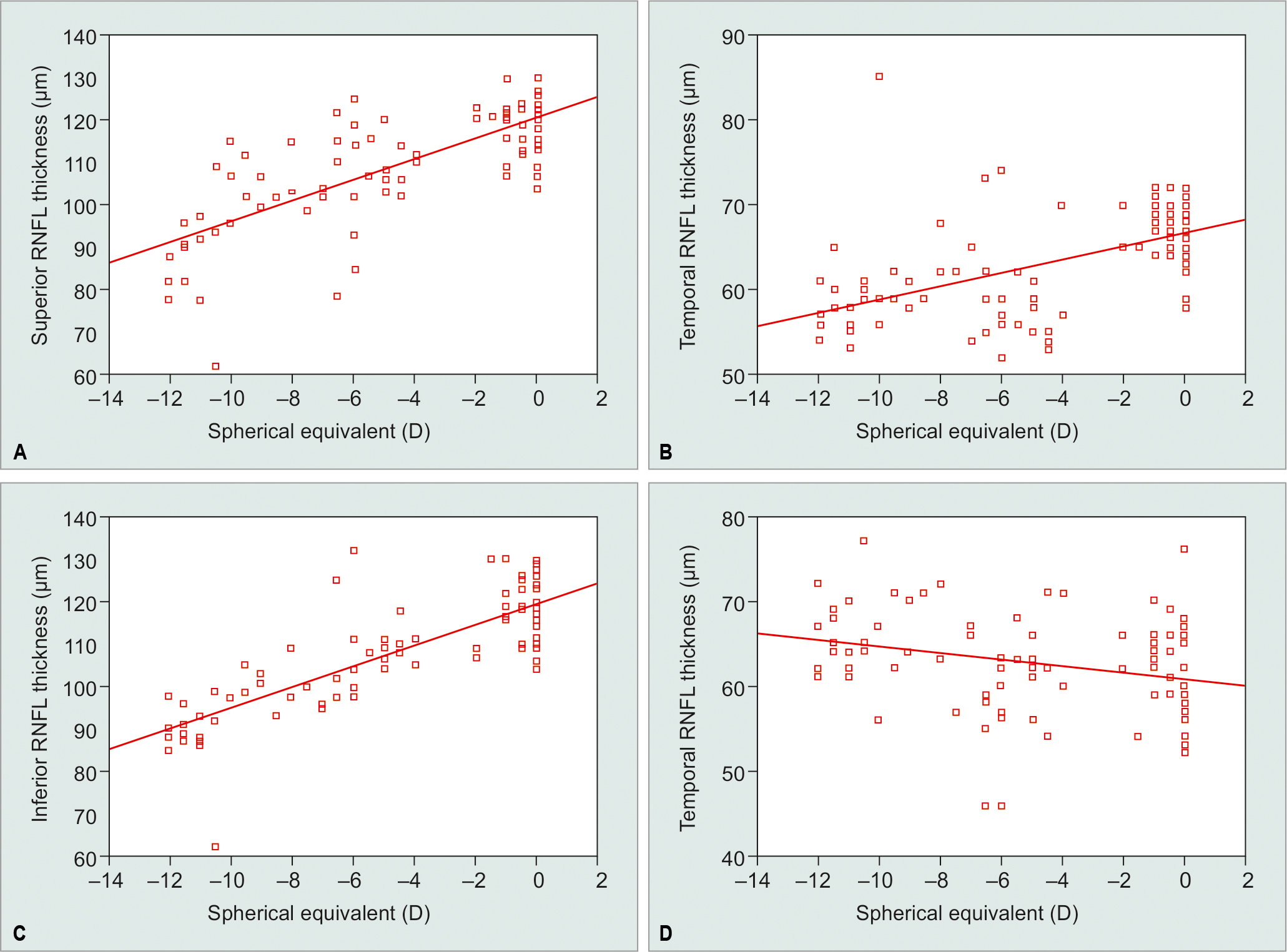 The main limitation of our study was that we did not correct for magnification factor and have not included hypermetropes in our study.