The intravitreal injection (IVI) of anti-vascular endothelial growth factor (anti-VEGF) has become one of the most common intraocular procedures over the past decade.1 The efficacy and safety profile of anti-VEGF therapy have revolutionized the treatment of several retinal diseases, such as neovascular age-related macular degeneration, retinal vein occlusion, and diabetic macular edema.2-4 Bevacizumab, an off label anti-VEGF drug used worldwide in the clinical practice for the last decade, is an humanized monoclonal antibody that binds all VEGF isoforms and interferes with receptor binding to inhibit its signal.3 Its efficacy and safety profile are similar to ranibizumab, but much less expensive, and for this reason is usually the first treatment choice.5

The majority of patients, over the course of their diseases, require multiple anti-VEGF IVI. The intraocular pressure (IOP) rise occurring after this procedure revealed to be transient and usually normalizes spontaneously within 30 minutes;6-8 however, repeated IOP spikes may be a contributing factor for sustained IOP elevation in susceptible eyes, related to the trabecular meshwork damage.8,9 The presence of vitreous reflux has been associated with lower postinjection IOP10 and Pang et al11 reported that the incidence of vitreous reflux was higher with larger bore size needles. Hence, we hypothesize that larger 27-gauge needles are less associated with IOP spikes, as they may cause higher vitreous reflux.

Despite this, there is a tendency to favor smaller bore size needles owing to the requirement for less force to penetrate the sclera and the belief that it induces less pain.12 The patient's pain experience during the injection may hinder his collaboration with sudden movements of the eye that can potentially cause complications and may also affect the decision to keep the treatments. Therefore, patients’ comfort has to be taken into account, as IVI treatments are rising exponentially. The visual analog scale (VAS) is a common and easy tool for assessing pain and it has been shown to be a valid and reliable research method in previous ophthalmology studies.13-15

The main purpose of the study was to compare the effect of size on immediate postinjection IOP and on patients’ pain experienced after the IVI of bevacizumab.

The study was approved by the local ethics committee and informed consent (according to the tenets of the Declaration of Helsinki) was obtained from participating patients. All patients, referred for IVI of bevacizumab by an ophthalmologist from our institution, older than 18 years of age and mentally able to score the pain, were selected to participate in the study. The exclusion criteria were:

The patients were randomly selected to be injected with a 30-gauge (0.40 × 12 mm, Braun®) or a 27-gauge (0.30 × 12 mm, Braun®) needle. The periocular skin, eyelid margins, and eye lashes were cleaned with 10% povidone iodine before the IVI. After topical anesthetic oxibuprocaine 0.4% and topical 5% povidona-iodine solution application to the conjunctiva, an eyelid speculum was positioned to stabilize the eyelids. No sedation was administered to any patient. Bevacizumab (1.25 mg/0.05 mL) was dispensed into single-use 27-gauge and 30-gauge needle syringes using an aseptic technique. The anti-VEGF was injected into the vitreous cavity using a straight scleral technique through the pars plana, 3.5 to 4.0 mm posterior to the limbus at the superotemporal quadrant, with the patient in supine position and under sterile conditions.

All patients had immediate pre- and postinjection IOP measurements, using Goldmann applanation tonometry, by the same ophthalmologist who was masked to the needle caliber. The measurements were performed three times and the mean value was used for the analysis. The postinjection IOP was consistently measured within the first 5 minutes after the IVI. After the injection, patients were also asked to rate their pain experience during the procedure on a VAS, which is a psychometric response scale for subjective characteristics that cannot be directly measured, indicating a position along a continuous line between two end points 0 and 10. All VAS measurements were collected by a single ophthalmologist after explaining this method to the patients.

Demographic and patients’ characteristics were compared using descriptive statistics and univariate analysis as appropriate. Immediate postinjectionIOP and acute IOP variation between groups were compared by a 2-tailed t test. Considering the VAS scores, categorical parameters were analyzed using Mann-Whitney test and continuous parameters were analyzed by Spearman's rank correlations. A value of P < 0.05 was considered to indicate statistical significance. 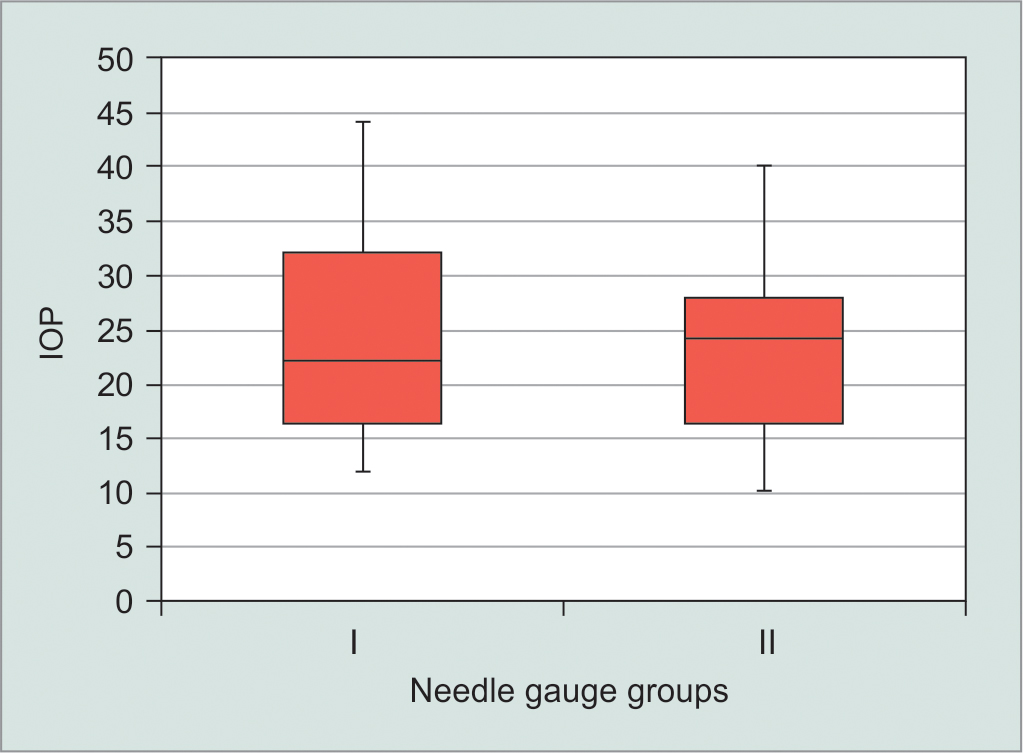 Fifty-four eyes of 48 patients received the bevacizumab IVI for the treatment of diabetic macular edema (63%), neovascular age-related macular degeneration (26%), and retinal vein occlusion (11%). Half of them were injected with 27-gauge needles whereas the other half with 30-gauge needles. 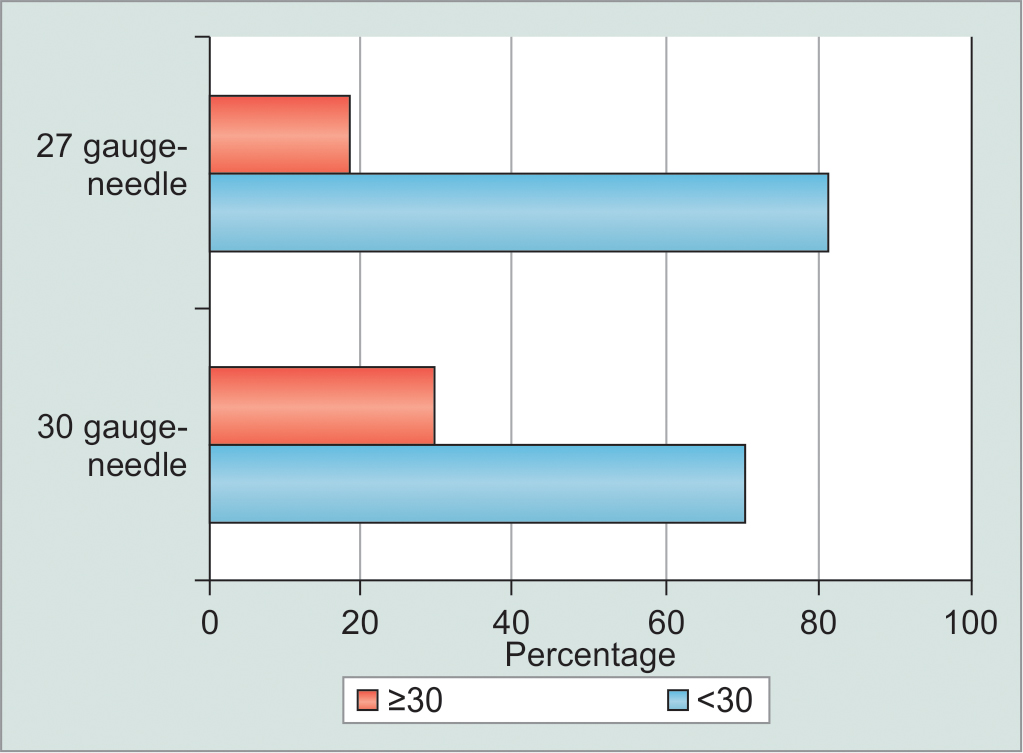 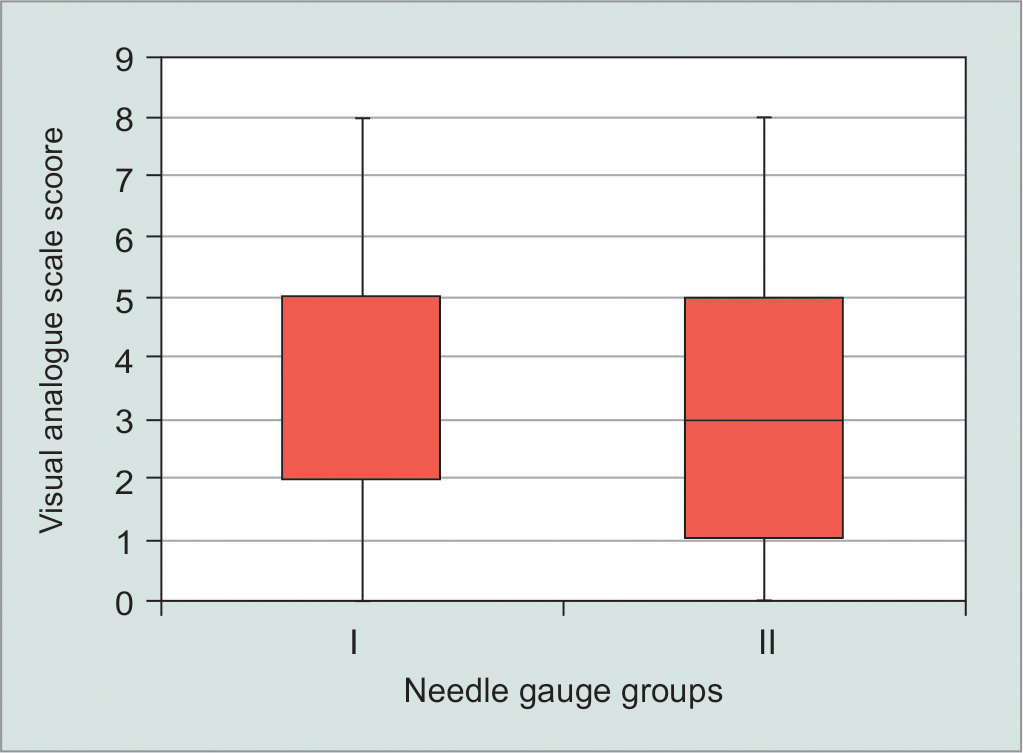 The IVI of anti-VEGF is a widespread accepted procedure; however, there is no clear consensus in terms of needle gauge used.9,16 The arguments surrounding the appropriate needle size choice have been related to the patients’ pain experience during the injection and the immediate post-IVI IOP. Therefore, this study might contribute to clarify the significance of needle choice, taking into account these two parameters, and thus helping to establish a standardized protocol.

Our study evidenced a significant IOP rise within the first minutes after the IVI, independently of the needle bore size. Despite the fact that the 27-gauge group presented a lower acute IOP variation, there was not a significant difference compared to the 30-gauge group. Previously, Kim et al17 showed greater IOP with 30- and 32-gauge needles in comparison to 27-gauge needles; however, the injections done with 30- and 32-gauge needles consisted of bevacizumab or ranibizumab, while injections done with 27-gauge needles were of pegaptanib or triamcinolone. Differently, in our study, we used the same drug and volume in both groups.

Pang et al11 investigated the effect of needle size on post-IVI IOP and reflux and found that eyes injected with 32-gauge needles had higher IOP and lower incidence of vitreous reflux compared to the eyes injected with larger 30-gauge needles. Therefore, these findings suggest that a larger bore size needle facilitate the vitreous reflux and thus lower IOP spikes after IVI are expected. In fact, in our study, the 27-gauge group had lower IOP after the injection and, furthermore, the IOP variation was lower than with 30-gauge needles, however, not significantly.

Attending to the technique, the tunneled scleral and the straight scleral IVI were previously compared by Knecht et al18, in terms of IOP increase after the injection and patient discomfort, without differences between the groups. Therefore, we used a straight scleral IVI technique in all patients and only studied the needle size impact.

With the increasing occurrence of patients receiving injections, often repeated for several times, evaluating the pain associated with this procedure is important to optimize patient's comfort and compliance. The VAS is a convenient tool, easily performed by anyone cognitively capable of understanding the parameters and responding to clinician instruction. After a brief explanation, no patients had difficulty in classifying the degree of their pain. The VAS is frequently used in the Portuguese population to assess the analgesic effect of a therapy and has been widely used in ophthalmic research.13-15 In our study, the IVI proved to cause only a mild pain, being well tolerated by the patients, independent of the needle bore size used.

A limitation of our study was the sample size which did not allow to analyze the effect of demographic factors on the pain score and postinjection IOP. Although the evaluation of the vitreous reflux could be of interest, the assessment of its absence (no detectable reflux) or presence (any visible reflux) is subjective. Therefore, quantitative studies regarding vitreous reflux and post-IVI IOP are needed. The axial length was not taken into account; however, it was not a predictor of subsequent IOP elevation in a previous study.23

The IVI caused a significant rise in IOP after the injection, independently of the needle size used. Although not significantly, the postinjection IOP and IOP variation were lower in the 27-gauge group. The 27-gauge might be selected in cases requiring less IOP variation, such as glaucomatous eyes in which IOP spikes can cause visual field deterioration. The use of 27-gauge needles showed no significant effect in the patients’ pain level.